The search for the origin of life amongst the planetary bodies in our solar system is a driving factor in space research. However, the simple act of sending a spacecraft to explore in situ solar system objects can potentially compromise their environments and cause harmful contamination when returning to Earth. Avoiding such biological contamination of planetary bodies (forward contamination) is essential in the scientific exploration of our solar system, as is protecting Earth’s environment from the introduction of extraterrestrial matter (backward contamination) from planetary missions. COSPAR, the Committee on Space Research, through an international panel of scientists regularly reviews the latest scientific research to provide guidelines and categorisation of space missions so as not to jeopardise future research and scientific investigation of celestial bodies.

Protecting the Earth from alien life sounds like the latest plot for a blockbuster thriller set in outer space. Whether it’s an invasion or a mysterious alien illness, the extraterrestrial threat to our planet has been well-explored in science fiction. But protecting the Earth from extraterrestrial contamination is not just a concept for our entertainment; as we explore further across our solar system and begin to land on our neighbouring planetary bodies, ensuring that we don’t bring potentially dangerous material home to Earth or indeed carry anything from Earth that may contaminate another planet is a responsibility we must take seriously.

So, who is responsible for ensuring that our space exploration is completed safely? Many nations around the world have their own space agencies, such as NASA and the European Space Agency, who run many different types of missions to explore space. States are responsible for their space activities under the Outer Space Treaty of 1967, including governmental and non-governmental actors. The Outer Space Treaty, among several provisions, regulates in its Article IX against harmful contamination. One of the core activities of the Committee on Space Research (COSPAR) is to develop, maintain, and promote a Policy on Planetary Protection, as the only international reference standard for spacefaring nations and in guiding compliance with Article IX of the Outer Space Treaty.

As we explore further across our solar system, ensuring we don’t bring potentially dangerous material home or indeed carry anything from Earth that may contaminate another planet and compromise scientific investigations is a responsibility we must take seriously.

COSPAR and its role
COSPAR is part of the International Science Council, a non-governmental organisation that brings together many different scientific unions and research councils from all over the world. COSPAR was formed to promote international scientific research in space and provide a forum for the discussion of challenges to scientific exploration. COSPAR has a panel that regularly reviews the most up-to-date scientific research and advises COSPAR on new adaptations to planetary protection, for which policy updates and implementation guidelines are required.

The COSPAR Panel on Planetary Protection (PPP) currently has 19 members who represent space agencies, experts from the scientific community and other stakeholders. Their expertise covers planetary bodies, including their geology and astrobiology, and they assess each scientific study and mission proposal to provide a categorisation for each space exploration mission. The most recent updates to the policy were approved in June 2020 by the COSPAR Bureau. 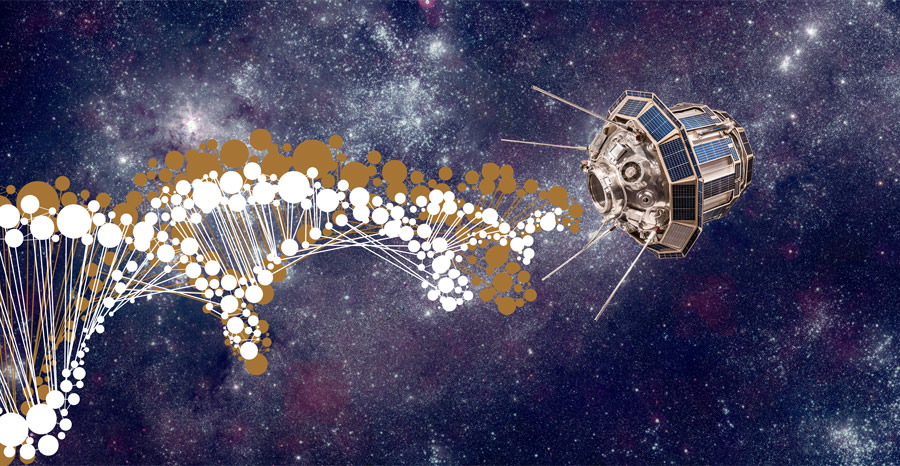 One of the main scientific interests for space exploration is to search for other forms of life away from Earth, as well as to look for clues about the origin of life and how it may have been distributed throughout the solar system. The key aim of the COSPAR PPP is to ensure that the scientific research related to these themes is in no way compromised through contamination. The PPP protects investment in space science and exploration and shields the Earth’s environment from any potential hazards by spacecraft returning samples from a mission to a solar system object.

Defining levels of protection
Space exploration involves missions sent from both private organisations and national or international space agencies like ESA, NASA, JAXA, etc., who send a variety of craft into the solar system to enhance our understanding of its origin and evolution. Some will enter in orbit around planetary bodies and others, such as the Moon or the Mars rover missions, will land on their surfaces. They will then monitor and take measurements of the surface environment, searching for traces of life. The main goal of COSPAR’s PPP is to prevent any of these missions from either taking biological material away from the Earth and contaminating the target planet as well as preventing any contamination from extraterrestrial material returned to Earth if the mission is designed to acquire samples for laboratory analysis. Using a categorisation approach, COSPAR determines whether each mission is low risk or high risk. The five Categories of Planetary Protection outline the recommended measures that an agency should apply to each mission.

Any mission that leaves Earth risks carrying our own microorganisms to its destination. For a mission searching for life on other planets, there is a risk that samples collected from the body of interest will be contaminated with Earth’s own biology when they are bought back to Earth for analysis. In order to avoid contaminating other planets prior to analysis, COSPAR has put in place implementation guidelines as part of the COSPAR Policy on Planetary Protection that prevent such forward contamination. In the event that life could exist elsewhere, those guidelines also prevent backward contamination of the Earth when samples are returned. This involves quarantining any samples prior to analysis or even preventing samples from landing on Earth.

Low-risk missions
The missions that are determined to be of lowest risk (Category I) are those to a target which is not of direct interest for research into evolution or the origin of life. These can include flyby, orbiter and lander missions but the destination (such as the Moon or particular types of asteroids) is of no interest for this area of research. Therefore, no specific protections are required of these missions. Both one-way trips and return trips to the Moon from Earth do not require planetary protection constraints as it is considered part of the terrestrial system. However, for higher-risk missions, more stringent levels of protection apply to ensure its protection from backwards contamination from other planetary bodies.

The lowest-risk missions that do require protection requirements for forward contamination are Category II missions. These are missions to planetary bodies that are of significant interest in the search for the origin of life, but the risk of contamination carried by a spacecraft is low. Venus, the Moon, the outer gaseous planets and a selection of their moons are some of the planetary bodies where missions are deemed a Category II. COSPAR requires a planetary protection plan to be in place for the mission as well as brief pre- and post-launch analyses detailing impact strategies and locations.

The COSPAR Policy on Planetary Protection plays a vital role in ensuring that we can continue to explore outer space and complete scientific research without contamination of planetary bodies or risk for the Earth’s biosphere.

Mars and the two moons Enceladus and Europa are all target planetary bodies where missions are considered Category III, IV or V. They are some of the most likely candidates to have life, or to hold clues as to how life evolved and was distributed within our solar system. Earth’s space agencies, such as NASA, are working towards sending humans to Mars, and the Juno mission is already orbiting Jupiter.

The international Mars Sample Return campaign will hopefully see the first Martian samples bought to Earth through the cooperation of major space agencies. Earth-return missions are grouped between unrestricted and restricted; unrestricted only follow specific guidance for the outgoing journey, and restricted must meet all standards for ensuring containment and suitable sterilisation of any returning spacecraft and samples to Earth.

Preventing contamination, not curbing exploration
The COSPAR Policy on Planetary Protection plays a vital role in ensuring that we can continue to explore outer space and complete scientific research without contamination of planetary bodies or risk for the Earth’s biosphere. COSPAR works through a variety of hypothetical scenarios to ensure future scientific research is not compromised. These include whether, after a decade of research, the signs of life found by a rover on Mars are Martian rather than terrestrial contamination, and whether potential extraterrestrial life bought to Earth is sufficiently quarantined. They aim not to stifle space exploration and research, but rather to ensure it can continue unimpeded through adequate protections and discussions by scientists and policymakers around the world.

What do you think poses the greatest threat to the future of scientific research in space?

<> If we contaminate the environments we want to investigate with our spacecraft we destroy any chance of properly studying such pristine environments. Hence, we lose information on the formation and evolution of our solar system. 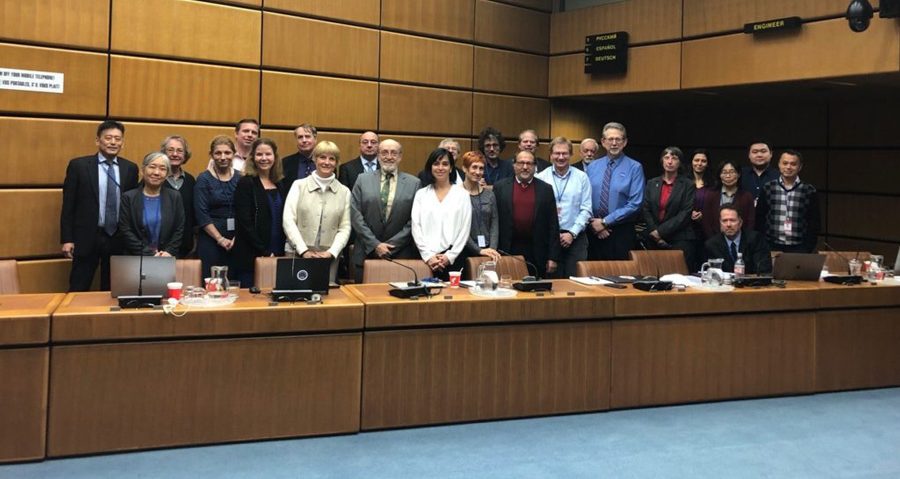 The COSPAR Panel on Planetary Protection members and guests at the December 2019 meeting in Vienna.

Athena Coustenis is Chair of the COSPAR Panel on Planetary Protection, Director of Research, CNRS, and is at the Laboratoire d’Etudes Spatiales et d’Instrumentation en Astrophysique (LESIA), Paris Observatory, France.

Gerhard Kminek is Vice-Chair of the COSPAR Panel on Planetary Protection, and is at the European Space Agency, Noordwijk, The Netherlands.

Niklas Hedman is Vice-Chair of the COSPAR Panel on Planetary Protection, and is in the Office for Outer Space Affairs, United Nations, Vienna, Austria.

The COSPAR Panel around Athena Coustenis, Gerhard Kminek and Niklas Hedman recently updated the COSPAR Planetary Protection Policy to ensure scientific investigations related to the origin and distribution of life are not compromised. 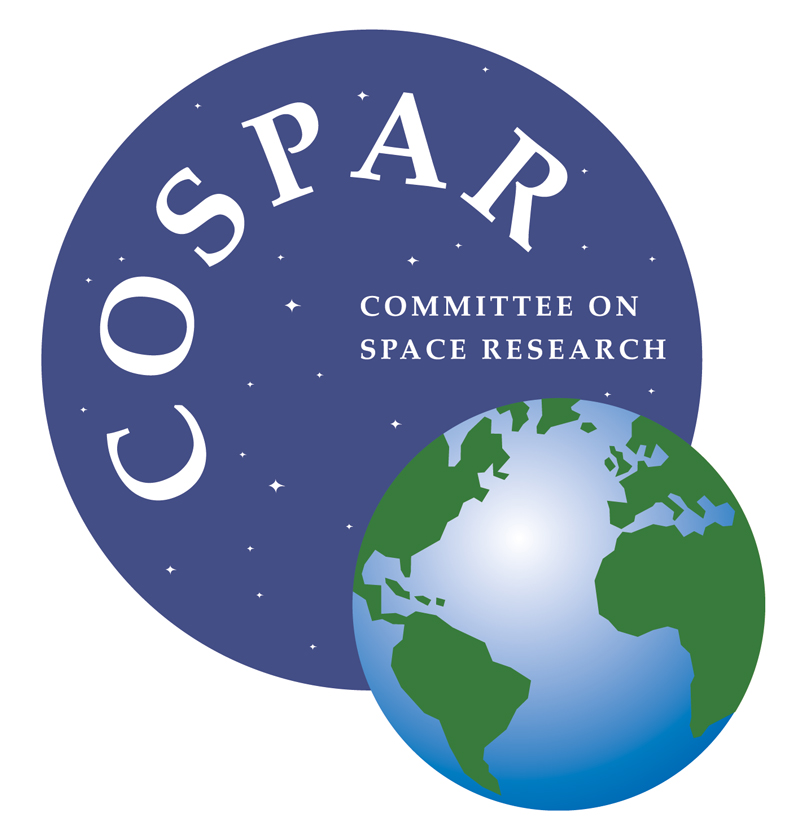 Monitoring electrolyte stability in lithium-air batteries for electric aircraft
Physical Sciences
Read This Article
Take a breath: Is it time to re-think how we diagnose COPD?
Health & Medicine
Read This Article