Health & Medicine
Lung disease is a major public health concern. However, research is hindered by the challenges of developing translatable human lung systems in a laboratory setting. Dr Sandra Leibel, neonatologist and Physician Scientist at UCSD and Rady Children’s Hospital in San Diego, USA, is studying lung development and disease mechanisms. In order to do this, she has developed stem cell-derived lung organoids, miniature lungs which can be grown in the lab and used to re-create lung diseases, test new drugs and learn more about lung development.

Lung disease is the fourth-leading cause of death in the US. The disease includes disorders such as respiratory distress syndrome, COPD, asthma, lung cancer, emphysema and infections such as influenza, pneumonia and tuberculosis. In order to understand more about these diseases, scientists need to be able to recreate human lungs in their laboratories. However, there are many challenges to studying the lung in a laboratory setting, including mimicking the 3D orientation, cellular architecture and blood supply that the lung would experience in a real-life setting.

Lung organoids
The term ‘organoid’ is used to describe a miniature, perfectly formed version of a larger organ that is grown artificially in a lab, but that is very similar to the real organ. Organoids are derived from stem cells – cells with the unique ability to differentiate into any kind of specialised cell type in the body. In organoids, the stem cells differentiate into organ-specific cell types that appear very similar to the corresponding organ and are able to recreate some of the same functions that the real organ would have. There are several types of organoids that have already featured in research projects, including intestinal, liver and neural organoids.

Dr Sandra Leibel, neonatologist and Physician Scientist at UCSD and Rady Children’s Hospital in San Diego, USA, is investigating ways to do just that. She aims to create lung organoids derived from stem cells that can be used for the study of lung development and disease. These organoids even contain many of the same cell types that would be found in a real lung.

Dr Leibel and her team have used the organoids to correct genetic mutations, interpret cellular signals and identify biomarkers that are important for lung development. They were also able to infect the organoids with a variety of different viruses in order to study the mechanisms used by the virus to infect lung cells, and to search for potential therapies that could be used to combat lung infections.

In order to understand more about these diseases, scientists need to be able to recreate human lungs in their laboratories.

One benefit of lung organoids is that they can remain specifically matched to the patient whose cells they were derived from. Induced pluripotent stem cells can be reprogrammed from skin or blood cells and retain the genetic imprints of that specific donor, meaning that therapies can be personalised to meet that patient’s individual needs.

Generation of lung organoids in the laboratory
Previously, it has been difficult to study the development of the lungs in the transition from foetus to new-born baby. However, Dr Leibel and colleagues were able to describe a method which can be used to create 3D structures that emulate the development and function of the lung, from human stem cells.

The stem cells are first grown on a 2D matrix before being transferred to a system where they can grow into 3D structures. If the organoid is able to maintain this 3D structure, surfactant-producing cells develop and if the organoid is exposed to an air-liquid interface, then ciliated and goblet cells develop. Dr Leibel explains that this whole process takes about 35 days, therefore careful planning is required. In fact, her research team are already working on new ways to make the process more automated, less labour-intensive and generate higher throughput.

There are endless possible uses for these lung organoids, including the study of environmental factors, lung infections, or to test the efficacy and safety of new drugs and novel therapies to treat lung diseases.

There is also the possibility to derive induced pluripotent stem cells from a wide range of individuals with diverse racial backgrounds, ages and predisposition to disease. This would enable a variety of lung organoids to be developed which could then be used, for example, to explore why people respond differently to viral respiratory infections, or to test efficacy of new drugs on different patient groups.

Lung organoids in practice
Surfactant protein B (SP-B) is a protein found in lung surfactant; it rearranges other molecules in the fluid lining the lung to allow the alveoli and lung to inflate more easily. A lack of SFTPB, the gene associated with SP-B, leads to serious lung conditions, including respiratory distress syndrome in preterm babies. SFTPB deficiency can also be fatal to new-born term infants. It is an inherited disease which normally leads to respiratory failure, requiring a lung transplant during the first year of life.

Dr Leibel has published work suggesting that this lethal lung disease can be targeted and corrected in a human lung organoid in the laboratory. In order to do this, the scientists first needed to grow a lung organoid using induced pluripotent stem cells from a patient with SFTPB deficiency. They then used a specially designed virus, called a lentivirus, to transfer the gene needed for SFTPB into the SFTPB-deficient stem cells. Following this step, the research group was able to show that SP-B protein was produced by the cells of the organoid, in addition to functional surfactant-producing cells.

Dr Leibel dreams of being able to transplant the altered lung cells back into the patient.

However, some of the cells that would be found in a real lung, such as blood vessels and immune cells, are not present in the organoid, suggesting that there is still more work to be done. Furthermore, although this gene therapy approach was successful in lab-grown lungs, it is not yet clear how this would translate to human subjects.

Nevertheless, this presents a promising approach which can be applied to other genetic lung diseases such as cystic fibrosis.

The vision for the future
Dr Leibel dreams of being able to transplant the altered lung cells back into the patient. This has the potential to perhaps prevent or cure disease. For example, if there is a mutation in a person’s lung cells which causes disease, the defective cells could be replaced with new lung cells that have had the mutation genetically edited out, meaning the person is much less likely to develop a lung disease.

Ultimately, the human lung organoid platform can be used to study genetic lung diseases, and to investigate the use of gene therapy to fix the mutations or introduce new mutations to manage disease. Furthermore, organoids can be used to test new drugs and to learn more about the mechanisms underlying lung development and disease.

Are you working on any other genetic engineering therapies for other lung diseases currently?

<> There are mutations in surfactant protein C, ABCA3 and NKX2-1, which may be amenable to genetic engineering. We’re focusing on understanding NKX2-1 in our current projects.
NKX2-1 is an important transcription factor for lung development. It’s the first lung-specific gene to be activated in an embryo in the earliest phase of lung development and is also important in regulating surfactant expression.

Laboratory lungs: The implications of lung organoids for health and disease was last modified: November 9th, 2020 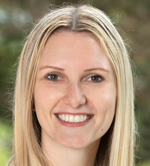 Sandra Leibel is a Physician Scientist who works as a neonatologist and lung biologist. Dr Leibel started the human lung organoid project as a fellow at Washington University, then continued it and got her Master’s degree in physiology at the University of Toronto. Finally, she moved to San Diego to continue to study the lung, both in a dish and in fragile preterm babies.