Physical Sciences
Electric circuitry – energy-wasting and prone to interference – is overdue an overhaul. In several industries optical fibres allow faster data transfers, and ‘fibre’ is becoming synonymous with ‘faster internet’. As technologies like cloud storage drive a desire for ever-increasing data transfer speeds, optical fibres are expected to make their way inside computers. This requires a new set of manufacturing techniques, and Professor Takaaki Ishigure and his group at Keio University, have created the Mosquito method, which neatly solves many of the current problems with fabricating optical circuitry. Meanwhile, Prof Ishigure and Dr Md Omar Faruk Rasel have illustrated the 3-dimensional optical wiring circuits and its applications for board-level links.

Look inside any digital watch, mobile phone or laptop and you’ll very likely find a PCB – a rigid green sheet of resin detailed with miniscule components that are delicately connected by tracks of copper.

Electricity running on copper wires has for a long time been the method of choice for transferring information in computing and telecommunications networks, but it has its limitations. The bandwidth is limited, the resistance in wires causes energy loss, and the current in one wire can induce current in nearby wires.

Optical fibres are a modern approach to data transmission, and products utilising this technology are steadily making their way into markets, and also into public consciousness. A particularly prominent example is the use of fibre optic cables for home and office internet; a solution to the bandwidth limitations of copper-based Ethernet cables.

Optical fibres may find use in applications where it is important to avoid data losses or electromagnetic interference, but their forte is their high bandwidth like the telecommunications and computer networking industries. As cloud storage is rolled out, demand is ever increasing for high-volume data transfer.

The microdispenser is equipped with a syringe which is inserted into the liquid monomer, a feature which led to the researchers calling the technique the ‘Mosquito method’.

For the highest performance computers, there is a strong incentive to place the boundary of optical and electrical signal as close to the computer as possible, and even to place optical circuitry within computers. Optical components connected by optical datalinks are expected to be a crucial constituent of the next generation of high-performance computers. 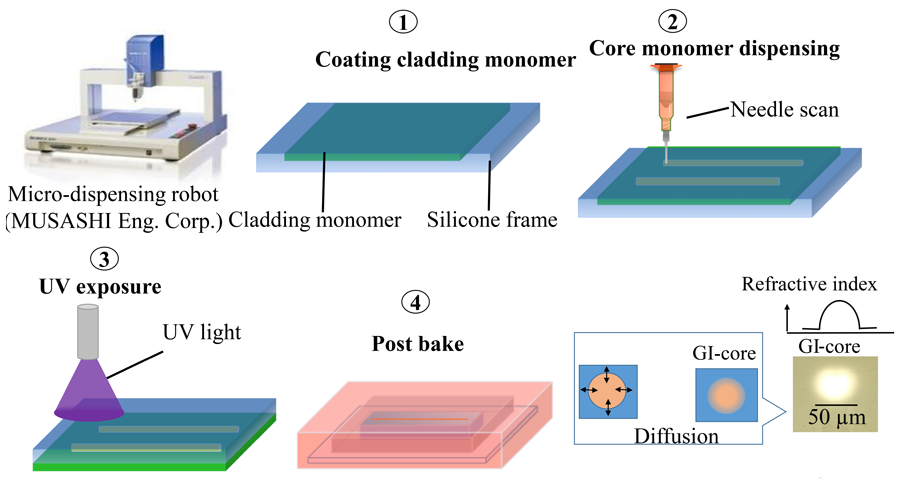 One of the major challenges of creating computers containing optical circuits, rather than conventional electrical circuits, is in linking together optical components. In electrical components, data is often transmitted over a ‘bus’ of several wires in parallel, each output pin on one chip corresponding to an input pin on the other. If two chips have mismatching pin layouts, it’s no problem – PCBs are formed from multiple layers, so tracks can bridge over each other.

However, the equivalent for optical circuitry – known as ‘channel shuffling’ − is a little harder to achieve. PCBs are used in places where space efficiency is crucial, so attaching two optical components via a bundle of several optical fibres would not be an option.

Recent research in this area has demonstrated the use of square-ended optical tracks which can be incorporated into PCBs. However, most of these ‘waveguides’ are designed to be printed in two dimensions, which is hugely problematic for channel-shuffling. Where the channel-shuffling occurs, the cores – the optical equivalent of wires – the tracks have to intersect. This leads to a large amount of channel crosstalk, where light leaks between the cores.

Professor Takaaki Ishigure and Dr Omar Faruk Rasel at Keio University in Yokohama, Japan, have recently published several papers detailing a novel technique for manufacturing optical waveguides. Their technique elegantly solves these problems, allowing channel-shuffling to occur without the cores ever intersecting, meaning that crosstalk and signal loss are kept incredibly low, whilst protecting the waveguides from breaking or losing signal quality due to bending.

This technique involves using commercially available parts, including a tabletop robot and a microdispenser system. A liquid monomer is cast into a mould on top of a dust-free substrate such as silicon, glass or plastic. The microdispenser is equipped with a syringe which is inserted into the liquid monomer, a feature which led to the researchers calling the technique the ‘Mosquito method’. The syringe extrudes a second type of liquid monomer into the first, in the shape of the desired wiring pattern. 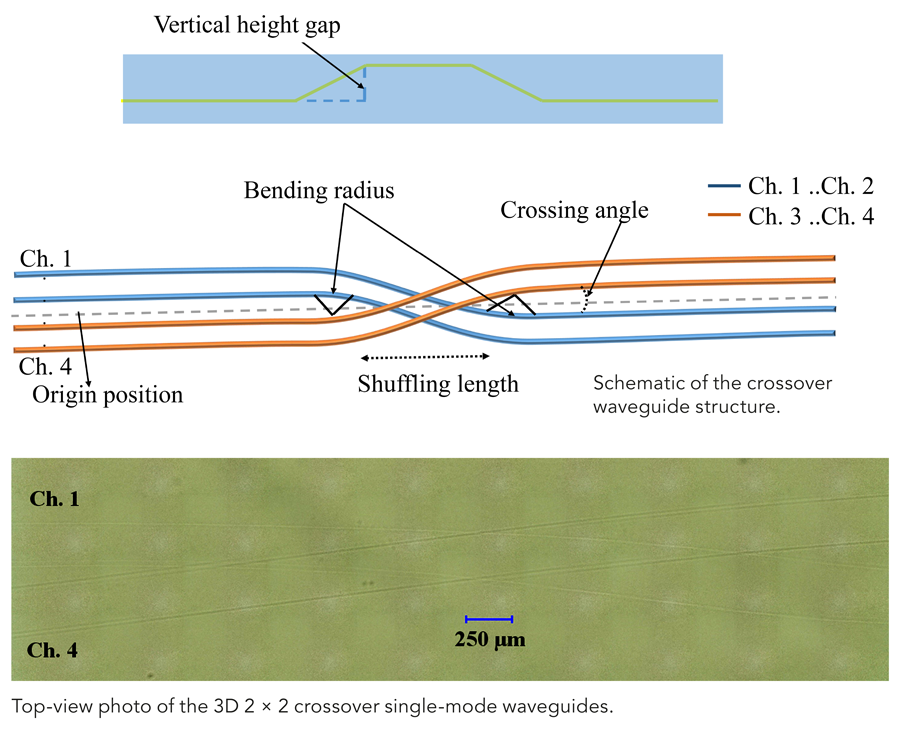 In the locations where cores cross, the tabletop robot changes the height of the dispensing needle so that cores do not intersect. Once all the cores have been dispensed, both the cladding and the core monomers can be cured using UV light to form the solid polymer waveguides.

Early prototypes of this method revealed something important: as the needle passes through the unset cladding monomer without providing a height gap, as it crosses existing cores it disturbs their shapes. The undesired alterations to the shape of these cores can lower the signal quality. To avoid this, the needle must pass high enough over the previously laid down core.

Crosstalk and signal loss are kept incredibly low, whilst protecting the waveguides from breaking or losing signal quality due to bending.

However, a greater height deviation necessitates a more severe change in direction, which can be detrimental to the ability of the new waveguide to transmit an optical signal. Keeping the height difference as low as possible between wires is also important to maintain a compact form factor for these structures. 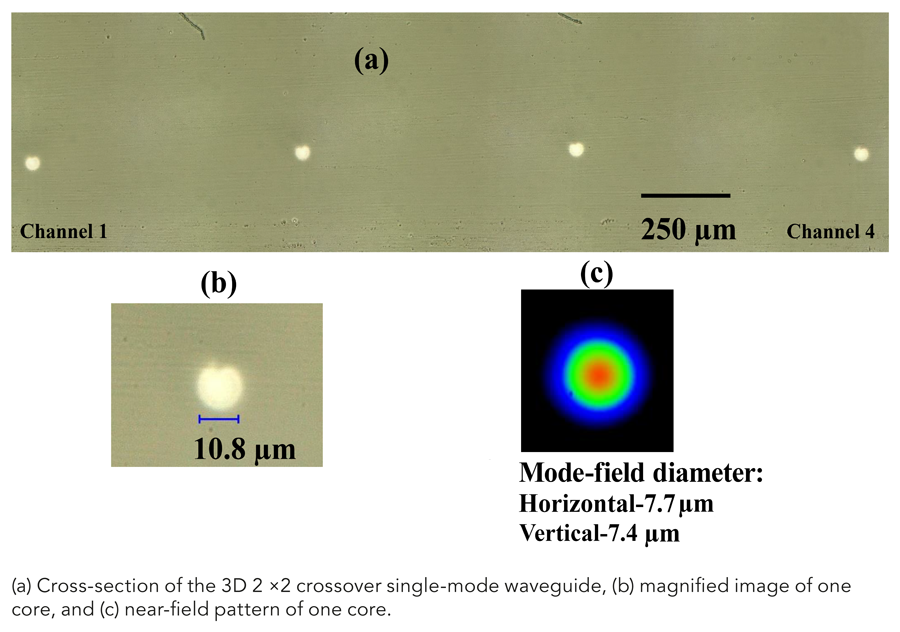 The small height difference – less than quarter of a millimetre – has other advantages. The waveguide cures it shrinks, which results in warping. This effect is more pronounced in thicker waveguide structures, and can be avoided by keeping the waveguide thickness low.

A convenient property of the Mosquito method is that it allows for greater tolerance in the core radius. Conventional waveguides and fibre optic cables generally have a sudden change in refractive index between the core and the cladding materials, allowing total internal reflection to occur. Cores of this type are known as ‘Step Index’ (SI) cores. 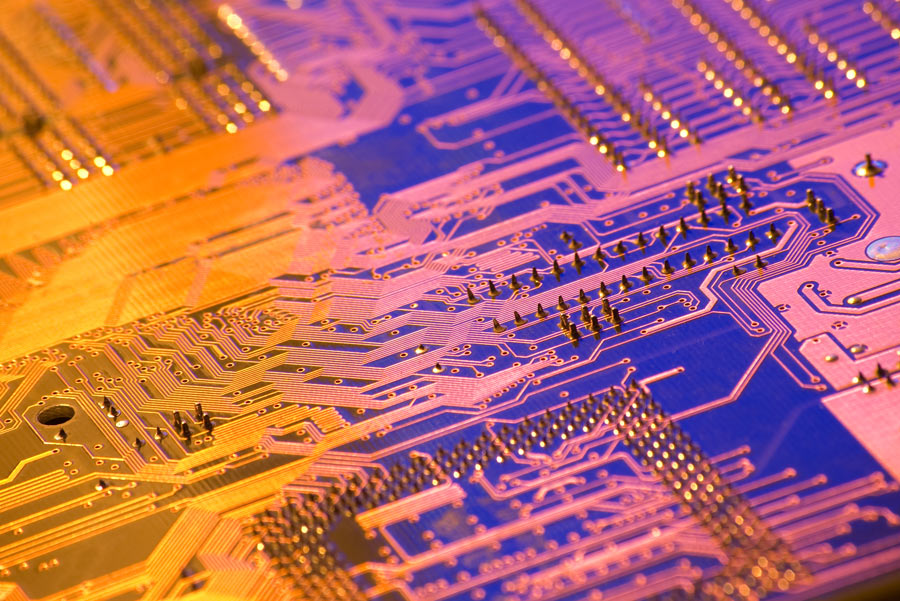 Because the two types of liquid monomers co-exist and can diffuse into each other a little before UV curing, the change in refractive index between the waveguide core and the cladding materials is gradual. This type of core is known as a Graded Index (GI) core, and still confines the light allowing the core in a sinusoidal way to act as a waveguide. However, rather than sharp reflections occurring at the core boundaries, the beam of light gradually changes direction in a sine-wave shape. Not only does this allow for a greater tolerance in waveguide radius, it also reduces the optical loss during the S-shaped bends necessary in channel-shuffling optical waveguide structures. The cores created using the Mosquito method have a radius of approximately 5.4 micrometers for single-mode polymer waveguides.

These devices have low losses and channel crosstalk, meaning that they could replace the use of multiple fibres to connect optical components within a PCB and between PCBs.

Optical datalinks like those created using the Mosquito methods are clearly a valuable fabrication technique for High-Performance Computing.

<> The Mosquito method is capable of forming graded-index parabolic profile based circular cores, which exhibit high coupling efficiency when connected to multimode and single-mode fibres. The attractive feature of the Mosquito method is its capability to form 3-dimensional wiring circuitry. For the application of the 3D wiring, the 3D crossover polymer waveguides are fabricated by the Mosquito method. These waveguides exhibit excellent optical properties like low losses and low crosstalk, and eliminate the application of multiple fibres in channel-shuffling optical circuitry. 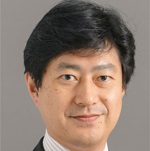 Takaaki Ishigure received his Ph.D. in material science from Keio University, Yokohama, Japan, in 1996. He is currently a Professor of Keio University. In 2005, he worked at the Department of Electrical Engineering, Columbia University, New York, USA as a Visiting Research Scientist. He has been a member of OSA, SPIE, JIEP, and JSAP. He has been a senior member of IEEE and IEICE since 2017.