Health & Medicine
Professor Sabine Mai of the University of Manitoba, Canada, has been examining the links between genomic instability and cancer using 3D imaging of the genome. She has also collaborated on cutting-edge research, utilising a potential biomarker called Lamin A/C for determining the aggressiveness of Hodgkin’s lymphoma and the severity of Multiple Myeloma. This research is a first step toward circumventing the pitfalls pertaining to current prognostic techniques. Prof Mai wrote a review in 2020, along with Niina Dubik, summarising what is currently known about Lamin A/C in normal and tumour cells.

For the human body to function optimally, a state of cellular equilibrium called ‘homeostasis’ needs to be maintained in perpetuity. For this, many cellular fail-safes exist. One example is known as the ‘Hayflick limit’, which maintains balance by ‘retiring’ a cell after approximately 50-60 replications, helping to prevent a build-up of mutations that can lead to cancer. After reaching the Hayflick limit, the cell enters a state of dormancy referred to as cellular ‘senescence’. Cancerous cells are not bound by the Hayflick limit, therefore accumulating damage to their DNA and proliferating uncontrollably.

Telomeres and regulation of cell division
Chromosomes (the structure that DNA is packaged in) have protective protein caps called ‘telomeres’ on their ends, which protect against DNA degradation. Every time a cell replicates, the telomeres shorten. Once telomeres reach a critically short length (the Hayflick limit), the cell undergoes a process known as ‘replicative senescence’ (the irreversible arrest of the cell’s ability to proliferate).

Telomerase is an enzyme that prevents shortening of telomeres. It is active in 85-95% of cancers, allowing cancer cells to live longer than healthy cells and replicate many more times, resulting in the growth of a malignant tumour.

3D telomere analysis: hope for accurate prognoses of Multiple Myeloma?
Prof Sabine Mai of the University of Manitoba, Canada, has demonstrated that 3D telomere imaging can be used as a diagnostic tool to understand the number of genetic mutations present in a cell. Uncovering the level of genomic instability is key to determining the aggressiveness of the cancer and, therefore, the prognosis. This technique may one day be instrumental in defining which patients should receive treatment and at which stage – a treatment model known as ‘precision’ or ‘tailored’ medicine.

In determining the prognosis of Multiple Myeloma (MM; an incurable blood cancer), cytogenetic analysis (the study of chromosomes) is a valuable tool. One such technique is known as ‘fluorescent in situ hybridisation’ (FISH). FISH is a laboratory technique that visualises a specific DNA sequence on a chromosome using fluorescent markers. Certain outcomes are associated with more aggressive presentation and poorer prognosis, for example, translocations involving chromosome 14 (Abdallah et al., 2020). However, in a large proportion of patients, the results of cytogenetic analysis alone do not give an accurate enough indication of progression from the precursor conditions, Monoclonal Gammopathy of Undetermined Significance (MGUS) and Smouldering Multiple Myeloma (SMM) into MM (Ziogas et al., 2018).

In their 2021 paper, Prof Mai and collaborators conducted a longitudinal blind study investigating the link between telomere architecture and the aggressiveness of MM that affects B-lymphocytes (a type of white blood cell that forms part of the immune system).

Two different patients with the same Gleason score can have
vastly varying prognoses.

Telomeres of healthy cells are arranged in a non-overlapping fashion within the nucleus. However, using quantitative 3D FISH (measured with TeloView, Telo Genomics, Toronto ON, Canada), it transpires that the telomeres of cancer cells are organised in clusters called ‘telomeric aggregates’. Prof Mai and members of her research team found that 3D telomere organisation in the nucleus of the MM cells reveal multiple changes from the situation found in normal cells. For example, increased numbers of telomeric aggregates and shorter telomeres correlate with shorter survival rates. These results support previous studies that found shorter telomeres in the white blood cells of MM patients when compared to those of healthy donors, and added additional 3D telomeric parameters that allow for the assessment of indolent vs. aggressive/progressive disease.

Additionally, telomere numbers displayed significant differences in their presentation in patients suffering with MGUS versus patients with MM. Telomere numbers also differed in those with indolent versus high-risk SMM and in patients with stable versus progressive MM. This demonstrates that telomere aggregates, length, and number (visualised using 3D FISH) constitute important diagnostic indicators. It is hoped that this technology will in the future enable clinicians to separate patients with a stable form of the disease and those with a more aggressive presentation at diagnosis. The researchers also found that patients with advantageous cytogenetics can still display aggressive forms of the disease. Therefore, it is essential to develop new techniques that help clinicians to predict disease progression and prognosis in order to administer personalised treatment plans.

3D telomere imaging and prognosis in prostate cancer
In a previous study published in 2019, Prof Mai and colleagues used 3D telomere imaging of circulating tumor cells to determine the risk of progression in intermediate-risk prostate cancer patients. Prostate cancer is the second most commonly diagnosed cancer in men and can take both aggressive and indolent forms. The grading system for this cancer is known as the Gleason scoring system, which is based on prostate cancer biopsies and is used to determine how differentiated the prostate cancer cells look compared to their healthy counterparts. However, two different patients with the same Gleason score can have vastly varying prognoses. This may lead to militant treatment for indolent tumours while aggressive tumours are overlooked or treated too late, leading to poorer prognosis.

To navigate this pitfall, Prof Mai and colleagues collected blood samples from intermediate-risk prostate cancer patients in order to harvest circulating tumour cells (CTCs) from patients prior to radical prostatectomies (removal of the prostate). They then performed 3D fluorescent telomere imaging and profiling to determine the level of genomic instability in the CTCs.

Lamin A/C: a cancer biomarker
Another area of interest that is being researched by Prof Mai involves a protein that resides in the nuclear lamina of cells, acting as a potential biomarker for intermediate prostate cancer and other cancers. The nuclear lamina is a meshwork of proteins residing in the inner side of the nuclear envelope. Lamins are subcategorised into two varieties: A-type Lamins and B-type Lamins. Lamin-A and Lamin-C originate from the same gene and are of a similar nature. As such, they are commonly studied together and amalgamated under the term ‘Lamin-A/C’.

Lamin A/C is multi-functional within the cell, assisting with the protection of telomeres, maintenance of the cell’s structural integrity, cell motility, chromosome arrangement and regulation of gene expression (Dubik and Mai, 2020). Diseases arising from the mutated form of Lamin A/C are named ‘laminopathies’. Examples of these include Emery-Dreifuss muscular dystrophy (EDMD), a rare, inherited disease affecting the muscles, and Dilated Cardiomyopathy, a thinning of the heart muscle, which impacts the heart’s ability to pump blood around the body. Progeria, an accelerated ageing disease, is another example of a laminopathy which is caused by progerin, a mutated form of Lamin A (see figure 1).

As Dubik and Mai discussed in their 2020 review article, Lamin A/C is often under- or overproduced in cancers such as ovarian, breast, prostate, and lung. As Lamin A/C is important in maintaining healthy cell structure, it also fortifies CTCs, helping to protect them from harm during migration. Furthermore, the role it plays in cell motility and attachment (Zhang and Lv, 2017) is helpful to cancerous cells in invasion and metastasis of healthy tissue.
Lamin A/C expression and prostate cancer

A study by Kong et al., 2012, demonstrated that Lamin A/C expression is heterogeneous in high-grade prostate tumours, with the periphery of the tumour expressing higher levels (where the cancer cells were invading surrounding tissue). This supports the theory that Lamin A/C plays a part in neoplastic migration and metastasis. Furthermore, as mentioned in Prof Mai and Dubik’s review, increased levels of Lamin A/C led to increased motility and growth in prostate cancer cell lines LNCaP, DU145, and PC3 (see figure 2).

Conversely, other studies have shown that increased metastasis and poorer prognosis are associated with lower Lamin A/C levels. One explanation for this is that lower Lamin A/C levels cause cancer cells to become more malleable due to their role in cell structural integrity and that this makes it easier for the cancer cells to squeeze through intra-cellular junctions to metastasise.

Lamin A/C and Hodgkin’s lymphoma
The presence of Reed-Sternberg (RS) cells (which can appear as bi-, tri-, tetra- or multinucleated) and Hodgkin (H) cells (named this in their mono-nucleated form) is a diagnostic indicator of Hodgkin’s lymphoma and believed to originate from B-lymphocytes. RS cells can be characterised as ‘end stage’ tumour cells (tumour cells that can no longer divide).

In a 2018 paper written by Prof Mai and collaborators (Contu et al., 2018), 3D microscopy was used to observe the organisation of Lamin A/C in the nuclei of these cells. The researchers concluded that the spatial organisation of Lamin A/C is significantly different in RS and H cells compared to activated lymphocytes. Additionally, S and H cells exhibited high levels of Lamin A/C when compared with peripheral blood lymphocytes (PBL’s). Most significantly, the results of this study indicated that silencing Lamin A/C resulted in a downregulation of RS cells. These findings all point to Lamin A/C as a potential clinically useful indicator of the future transition of H cells to RS cells and may therefore be valuable for prognosis and grading of Hodgkin’s lymphoma.

Two steps ahead
This pioneering research represents a crucial movement towards more accurate predictors of disease progression and prognosis in cancer research and will be fundamental in the creation of personalised treatment plans, allowing clinicians to stay two steps ahead of cancers that devastate the lives of thousands of people every year.

What are the next steps in your research into Lamin A/C?

<>The next steps in my research will include studies into the downregulation (reduction) and knockout (silencing) of Lamin A/C in cancers where it is overexpressed, how knockdown affects the nuclear structure of cells, and finally, how it affects cell viability (the number of healthy living cells) and proliferation (cell growth and division) in cancers where Lamin A/C is overexpressed. 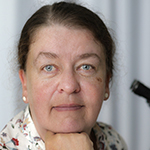 Sabine Mai did her MSc and PhD in Germany (Universities of Cologne and Karlsruhe, respectively) and her post-doctorate in Switzerland (Basel Institute for Immunology). She is currently a Full Professor and Tier 1 Canada Research Chair at the University of Manitoba. 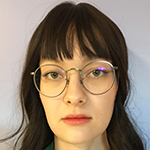 Niina Dubik did her Bachelor of Science at the University of Manitoba, Canada. She worked as a summer student in Dr Mai’s lab in 2020.