Business & Economics
Many organisations were already struggling from the effects of global, social, economic and environmental crises before the COVID-19 pandemic struck. As a result, sustainability and organisational resilience have become the focus of modern management research and literature. Dr Hope Witmer, of Malmö University in Sweden, believes that to successfully navigate the way ahead, organisations need to ‘degender’ their structures, practices and language, and better understand the millennial employees who will soon comprise three-quarters of their workforce.

The COVID-19 pandemic is the latest in a series of social, economic and environmental crises to hit organisations worldwide. As a result, the focus for many organisational leaders is how they can meet pandemic-induced pressures in addition to comprehensively addressing sustainability targets that address the triple bottom line of the combined concern for the planet, people, and profit.

In response to the effects of such crises – with their resultant uncertainties surrounding health and safety, as well as employment and supply chain issues – organisations are being forced to think and act in new ways. Sustainability concerns and organisational resilience – the ability of an organisation to anticipate, learn from, and quickly adapt to sudden change and disruption, as well as to new conditions – has become a key focus for leaders and managers worldwide. Dr Hope Witmer of the Department of Urban Studies at Malmö University in Sweden is a specialist in organisations and leadership. She is particularly interested in researching the topic from a resilience, learning, sustainability and gendered power construction perspective.

Dr Witmer believes that sustainable solutions to the problems that organisations currently face can be found if they add equity to their list of priorities and make equal use of the perspectives of all their employees. In her most recent work, she argues that the current crises can be addressed by the ‘degendering’ of organisational power structures and a better understanding of millennials in the workplace – men and women who have reached young adulthood in the early 21st century. Experts predict that this cohort will form 75% of employees by 2025.

Degendering organisations
Dr Witmer argues that organisations have historically been constructed as “primarily male, hierarchical, top-down organisational structures with command-and-control styles of leadership”. In this way, organisations – and management consultants – have typically placed a high value on normative masculine characteristics such as strength, decisiveness, rationality, and emotional detachment.

Despite best intentions and the adoption of regulatory practices to mainstream gender equality, Dr Witmer finds that what appears as men’s and women’s interests and concerns not being regarded equally is symptomatic of organisational practices that continue to feature gendered power structures, practices, and language which inhibit inclusivity and thereby organisational resilience.

She adds: “The purpose of the DOR Model is to expose patriarchal structures and power imbalances that perpetuate oppression and suppress resilient qualities that are not in accordance with hegemonic masculine forms of organisations. By exposing gendered practices, power imbalances and their reinforcing narratives, all aspects of organisational resilience can be incorporated without gendered distinctions weighting their value.”

Millennial attitudes
Dr Witmer further believes that organisations need a better understanding of millennials in the workplace – employees now between ages 21 and 35 – particularly because it is estimated that there will soon be three times as many millennial employees as employees from other generations.

Like any generation, millennials share a particular world view and set of values, beliefs, needs, and attitudes. Not only does this cohort demonstrate a more gender-fluid perspective as compared to typical binary definitions of gender, they also share a greater commitment to equity and sustainability. Dr Witmer also finds its members look beyond economic gain from employment and seek societal contribution and a better work-life balance than former generations. In addition, they share a distrust of institutions and place high value on individualism, looking to organisations as transient places where they can learn and grow. Rejecting existing organisational narratives and binary structures, they view leadership as a collaborative rather than top-down process.

Dr Witmer comments: “These compounded values and individualised perspectives can limit this generational group’s willingness to contribute to workplace goals that influence the sustainability of organisations.” She adds: “As the largest generation represented in the workplace, this group has power to create a critical mass for change that could influence future conditions in relation to equity and organisational resilience in sustainable organisations.”

As Dr Witmer explains, the findings confirmed that millennials value collaborative leadership and “look to individual mentors for their leadership training and development rather than corporate structures and practices”. In addition, group participants were “critical of hierarchical structures and distrustful of power that was limited to an individual versus a collaborative process”.

Discussions regarding how millennial perceptions are formulated were analysed based on the three categories of Dr Witmer’s DOR model, that is: power structures, actions, and language.

Among many insights, the results recognised the influence of national culture on organisational policies and perceived power to affect change. For example, some millennials reported that organisational policy reflected cultural gendered norms, which were not reflective of global gender equality perspectives. This was problematic by creating dissonance for those who regarded themselves as global citizens and wanted to see policies that align with global perspectives of equality.

It is important to highlight that gendered factors (what society defines as masculine or feminine) are linked to the systemic design of the organisation, although often embodied in the millennials’ experience based on their sex, as in the following examples.

Other millennials reported that even though employees had equal opportunities in the workplace, societal norms and expectations meant that they did not have equal support at home where much of the work is still done by women. Due to this lack of alignment of societal and workplace norms, they experienced the dual pressure of increased work responsibilities in addition to primary responsibilities at home. As Dr Witmer reports: “They viewed themselves as global citizens, yet they were still bound, and at times marginalised, by the norms of their national culture.”

Even when organisations had inclusive gender equity policies, employees reported that women might be given “a seat at the table”; however, it was hard for them to sustain power and they were often assigned feminine-coded tasks, such as minute-taking or arranging social events. In addition, though employees said that their organisations emphasised equal representation based on merit, females still had to “act male” to succeed, for example by “being harder or pushing and using power”, as stated by one interviewee.

Millennial males reported being frustrated that they felt “guilty by association” with masculine-coded organisational behaviour. One interviewee said: “I don’t want to be put in the same category as those old white men who are accused of abusing their power to oppress others.”

Dr Witmer concludes that millennials feel trapped between two conflicting narratives: what they consider politically correct and how the power dynamics in the systems they work in are constructed. She explains: “What emerged was a motivated cohort that felt empowered as individuals to bring about change for a sustainable future. However, within the organisational context, they felt frustrated and powerless to effect organisational change due to limited gender-weighted perspectives of organisational resilience.”

Conclusion
In times of crisis, organisational leaders need to use all their talent and resources to find innovative, inclusive and representative solutions to the problems they face. Though many organisations have moved towards more inclusive language, Dr Witmer’s research suggests that there is still a “disconnect between espoused values and actual practices”. As a result, organisations need to look at their systems, practices, and power dynamics to identify barriers to inclusivity.

Dr Witmer’s study of millennial employees – the largest cohort in the workplace – is highly significant for organisational leaders who need to incorporate multiple perspectives if they are to be resilient in response to long-term crises such as climate change along with short-term crises such as COVID-19. Among the most important insights: millennials are committed to social values and equity, but not necessarily to corporate culture. Furthermore, they share “a more equalitarian gender perspective” and are committed to social issues such as sustainability. In addition, they have a more integrated gendered perspective of resilience that incorporates masculine-coded aspects of resilience (e.g., strategic, directive, rational) with feminine-coded aspects of resilience (e.g., collaborative, reflective, empathetic) as equally valued in both word and deed regardless of their proximity or distance to hegemonic masculine organisational constructions.

Dr Witmer recommends organisational policies and practices “that deconstruct inequitable practices and co-create more agile structures, practices and narratives for sustainable and resilient organisations”. She explains: “For organisations to be resilient, there is a need for systemic processes that facilitate inclusion and diversity and lead to constructive, adaptive organisational responses when under high levels of stress and pressure. It is thereby important to incorporate these qualities that reflect and build robustness and sustainability on a systemic level.”

Following your research, do you regard the crises which organisations currently face as a threat or an opportunity?

<>
Resilience is an iterative process based on mission and built on learning and innovation, thereby any crisis is a threat and opportunity. In the recent crisis, well-established organisations with deep resources survived while small businesses, start-ups, gig workers, those with the least power, voice, and resources, have experienced this crisis as primarily a threat. Organisational resilience is not solely measured by economic gain but includes societal contribution and shared power. Thereby, it is important that organisations eliminated by the crisis are included in the post-COVID narratives to assure that definitions of resilience are not limited to economic success and power. 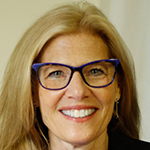 Dr Hope Witmer is an Associate Professor of leadership and organisation at Malmö University, Sweden. Her research focuses on resilience, power and gender constructions, in relation to sustainability leadership, organisational change, innovation and inclusion. She is the Director of the leadership for sustainability international master program.

Eyewitness testimony: How much alcohol is too much?
Behavioural Sciences
Read This Article
The ultimate veg patch: Can phytotechnology save cultivated peatlands?
Earth & Environment
Read This Article