Consciousness is an elusive concept. Professor Nicholas Money of Miami University in Oxford, Ohio has argued for a new philosophy of cellular consciousness and suggests that fungi have minds. When we explore the sensitivity of fungi and other microbes and recognise their ability to interpret and respond to their environment, it seems logical to extend the definition of consciousness to species without nervous systems. Fungi show remarkable abilities in their responses to external stimuli. Recent research on the intricacies of cellular cognition is reshaping how we think about microorganisms and ourselves.


Awareness is a complicated thing and consciousness is more elusive still. Humans have known that the brain is an organ for thousands of years and may have had a rudimentary idea of its function. The ancients would have observed changes in behaviour following head injuries, or perhaps they learned that the brain was a good target for instantly slaying their enemies. In our time, the way that the brain controls our actions and personalities remain matters of intense debate. Although the study of behavioural science has been extended to species without complex brains, most scientists believe that some form of nervous system is essential for an organism to possess consciousness. It was only in the last century that a few investigators began to re-evaluate their definitions of intelligence and consciousness and examine whether brainless organisms could be considered conscious.

It is difficult to define consciousness in a way that is fair to every type of organism. To do justice to all definitions and qualifications which make up our understanding of consciousness, we must look beyond our human-centred worldview. For example, if we assume a mind can only exist in a creature capable of movement, plants and fungi could never be conscious. Likewise, if we believe that consciousness must entail networks of cells which form patterns within a more complex body, this will exclude single-celled organisms.

It was these unconventional interpretations which sparked the first inquiry into non-human consciousness. In the early 1900s, scientists began to think of consciousness at the cellular level. This led to a model of consciousness which suggested that sentience and awareness were broadly grounded in the biology of the cell. Initial research into amoeba behaviour, for example, demonstrated how single-celled organisms could react to stimuli, escape predation, and move toward food. They even expressed forms of cooperative behaviour. In one such experiment, researchers observed changes in the hunting patterns of amoebas as they pursued their single-celled prey. When surrounded by abundant food, the amoeba was less active, but when the same food was scattered more sparsely, the amoeba sensed the need to change its behaviour and became more active in its search.

If we assume consciousness must entail networks of cells which form patterns within a more complex body, this will exclude single-celled organisms.

These experiments helped shape the concept of minimal selfhood, a pattern of conscious behaviour that does not require the organism to possess a brain or neural tissue. Instead, minimal selfhood is based on three intrinsically reflective activities: self-maintenance, self-reproduction, and self-containment. An organism is said to possess minimal selfhood if it can direct energy to maintain its processes, reproduce itself, and is defined by a physical boundary.

The fungal brain
Professor Money is interested in the implications of previous work on the philosophy of consciousness when applied to fungal behaviour. Like the amoebas, fungal hyphae (the microscopic threads which make up the body of a fungus) react to their environment, pursue food, and recognise a threat. Money recognised that they embody the concept of minimal selfhood without employing any nervous system, because their filamentous hyphae and their colonies or mycelia operate as if they possess a very simple form of intelligence. The fungal colony, in other words, can be seen as an organism with a primitive mind. This functions at the cellular level when the threads elongate at their tips in response to different stimuli. Each of these threads, which is adapted for the invasion and digestion of biological materials, produces thousands of internal vesicles (fluid-filled spheres enclosed by a membrane) every minute. The vesicles travel to the surface of the filaments, delivering the materials for elongation. The rapid motion and complex organisation of these vesicles embodies the sensitivity and consciousness of the fungus.

The vesicle mobilisation mechanism can be seen in hyphal filaments when they are punctured or sliced in the laboratory. Fungi deploy these little spheres to repair and patch injuries similar to the way blood clots in animals. The hyphae are also sensitive to microscopic ridges, which helps some pathogenic fungi detect the openings on the surface of the leaves of their host plants. Responses to environmental topography may also explain the unique growth patterns of fungi, which differ from species to species.

To deepen our understanding of fungal growth we need to look at mycelia in their natural habitats, where the fungal “brain” has the opportunity to respond to the richness of the forest floor rather than the featureless surface of a lab culture. As the mycelium expands, it detects the physical structure of its surroundings and responds to the availability of food and the presence of plants and other organisms. The overall pattern of branching is determined by the genetic code of the fungus, but the exact positions of each branch are dictated by the microscopic character of the environment. For this reason, the precise shape of each fungal colony is never reproduced. The individual fungus is unique, much like how no two humans are exactly alike. Although the fungus does not process information the same way a human does, the individual mycelium responds to environmental stimuli in a similar fashion.

Pathogenic fungal mycelia also respond to their environment when they invade a host. Species which target humans have been shown to modify their growth form to become more invasive as the infection develops. These responses are genetically programmed and not learned behaviours, but the fungus is able to grasp things about its environment and show something similar to the classical conditioning of Pavlov’s dogs.

In more recent experiments, some mycologists (fungal biologists) have been experimenting with fungal memory. When colonies of one species of fungus were exposed to high temperatures, they were better able to cope with a second heat shock compared to ‘uneducated’ colonies. This cellular adaptation lasted up to twelve hours. Another experiment demonstrated fungal spatial awareness by saturating a wooden block with fungal mycelium and placing it on a soil tray. As the fungus grew across the soil, it reacted when it found a fresh wood block by growing all around it and invading the new food source. Scientists then moved the initial wooden block to a new soil tray, tearing the fungus away from the soil. When the hyphae in the wooden block began to regrow, they extended from the original side from which they had found the second wooden block. This rudimentary memory can be considered as a form of consciousness.

Just like the animal brain, the fungal mind is aware of, and responds to, its environment.

Types of consciousness
The acute sensitivity of the fungi observed at the cellular level argues for the presence of a mind. Just like the animal brain, the fungal mind is aware of, and responds to, its environment. Awareness is not a unique privilege of the human mind, but it exists in many forms throughout nature. By extension, fungal consciousness, like human consciousness, is just one expression of a diverse and intricate biological phenomenon. The field of mycology has not previously applied a theory of the fungal brain to understand mycelial behaviour, and this new framework has the potential to enrich how we understand fungi and the wider concept of consciousness.

Increasingly, scientists are defining consciousness in terms of an organism’s awareness and reactions to its surroundings. The organism must be able to detect things that are good for it, such as light, food, or mates, and avoid those which harm it, like toxins or predators. These are all characteristics exhibited by single cells. Even more so, a single celled organism possesses a greater level of selfhood compared to a single specialised cell within a multicellular organism. A human heart cell cannot break off and become autonomous and self-sufficient, and its survival depends on being part of a larger body. Therefore, a fungus or an amoeba is in theory as autonomous and self-reliant as a human.

Fungal mycelia form networks in the soil which interconnect with plants and other fungi. Professor Money claims that the sensitivity of fungal hyphae is evidence of the consciousness of a single hypha; when these filaments are linked in a network, consciousness is elevated to the level of a multicellular organism. Fungal colonies share resources in the form of nutrient transport through the cells, and exchange information about their environment. Like the human brain, these networks importantly become more than the sum of their parts. This new understanding of the intricate sensory and response mechanisms of brainless organisms is humbling. It serves as a vital reminder at a time of time of ecological deterioration and human hubris that we are not the only conscious organisms on the planet, because consciousness is all around us.

Much of this research explores how fungi respond to stimuli, but this is only one definition of consciousness. Is it possible, in your opinion, for a fungus to be aware of itself and its existence?

If we include self-awareness in the criteria of consciousness, a fungus seems to fail, but we need to push a little further and consider what we mean by self-awareness. When a fungal colony reacts to personal injury, its response is an unambiguous act of self-preservation. The fungus senses that it has been damaged and mobilises its onboard repair mechanisms, which is an expression of self-awareness. Although human self-awareness is a richer phenomenon, it must be produced by the same kinds of cellular processes that operate in every species. Consciousness is a characteristic of life, not a special feature of Homo sapiens. 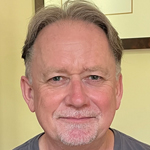 Nicholas Money is a charismatic teacher, international expert on fungal biology, and the author of popular science books that celebrate the microbial world. He is a Professor of Biology and Western Program Director at Miami University in Oxford, Ohio.