Earth & Environment
Agriculture and livestock production contribute significantly to greenhouse gas emissions and climate change. To reduce these emissions, some environmental groups advocate reducing the amount of red meat that we consume. James Dyer and Raymond Desjardins, Agriculture and Agri-Food Canada (AAFC), were interested in the impact that reducing red meat, diversifying meat consumption and changing cattle diets could potentially have on greenhouse gas emissions from livestock production in Canada.

Agricultural production has a significant impact on the environment; both through direct emissions of greenhouse gases (GHG) and indirectly through land use. Food systems were estimated to contribute to 37% of total GHG emissions in 2020, with this figure projected to increase by a further 30–40% by 2050 unless significant changes are made to agricultural systems globally. Indeed, a prominent study recently called for a global 50% reduction in red meat consumption by 2050.

This coincides with a push from medical professionals to reduce red meat intake, as a diet high in products derived from red meat has been shown to increase the risk of cardiovascular disease and some cancers. There are a number of other motivating factors for reducing or excluding red meat in the diet, including religious, socio-economic and ethical aspects.

Agencies in Canada are investigating ways to reduce the carbon footprint of livestock production. As part of the emerging medical concern, the 2019 Canada Food Guide recommended that a more diverse range of protein sources, including non-animal sources such as pulses and legumes, should be incorporated in the diet. This would result in reduced red meat consumption by Canadians.

Given the complex interplay between human diet, land use and climate change, how a potential reduction in the amount of red meat eaten would impact the carbon footprint of Canadian livestock is poorly understood. 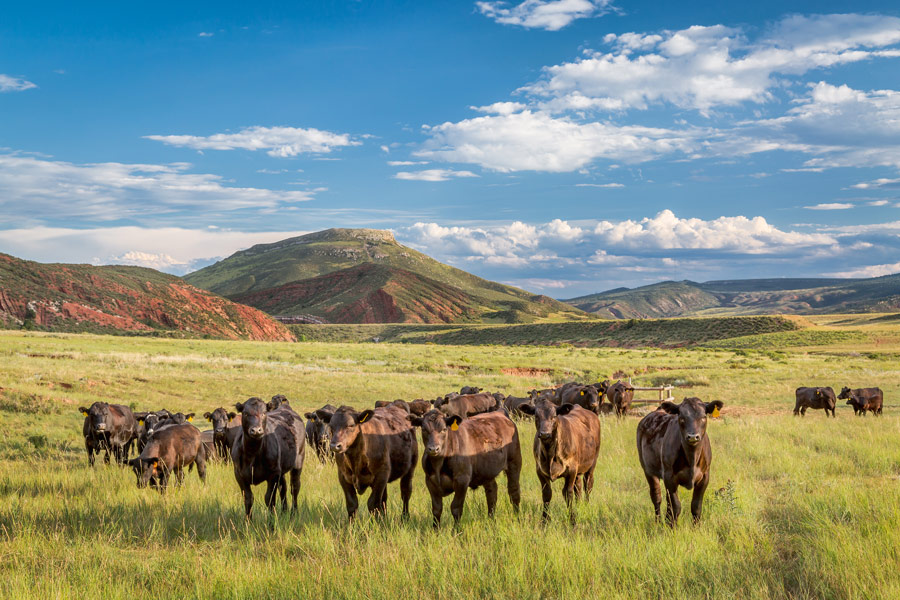 A common denominator
Much of the work done to minimise the livestock carbon footprint in Canada has focused on five main commodities: beef, pork, dairy, poultry and sheep. However, due to the different products and production systems for these industries, it has been difficult to directly compare their carbon footprints, highlighting the need for a common denominator. The use of a common food constituent, edible protein, represents a comparable measurement that can be derived from each livestock commodity. This idea was first proposed in 2010 by James Dyer and Dr Raymond Desjardins, Agriculture and Agri-Food Canada, and the term ‘GHG-protein indicator’ was coined. Since 2010, this GHG-protein indicator has undergone a wide variety of applications in Canada, where it has been used to compare GHG emissions and the protein derived from livestock in a number of high-quality studies. The researchers made the indicator value as reliable as possible by incorporating the life cycles of the different types of livestock and using emission factors specific to Canada. Their more recent studies are, therefore, supported by previous robust, peer-reviewed literature.

If consumers ate less red meat and diversified their meat choices, they could significantly reduce GHG emissions from agriculture.

Livestock and greenhouse gas emissions
Many methodologies already exist to assess the GHG emissions of livestock systems. However, these are often specifically designed for a certain type of livestock, agricultural conditions and computation assumptions, meaning that they can neither be compared nor applied to a wide variety of scenarios. This limitation made studying the interactions among the livestock industries a major challenge.

Using the GHG-protein indicator allowed Dyer and Desjardins to investigate the impact that a reduction in red meat consumption would have on GHG emissions in Canada.

The researchers established the amount of meat that would need to be produced in order to meet current levels of protein consumption. They then used nine different scenarios, taking into account factors such as livestock type, production system required, and the crops needed to provide feed for the livestock. While only a simulation rather than an analysis of real data, the results predict the general trend in GHG emissions if red meat consumption was reduced from the level at which it is now consumed to the minimum intake recommended by medical professionals (between 16kg and 28kg of boneless meat per year, depending on the type of meat).

Their simulation assumed that a major expansion in broiler production would be needed to meet the current protein intake from beef, pork and broilers. In Canada, this equated to meeting the current requirements for 390,000 tonnes of protein per year, which resulted in GHG emissions of 21 Mt CO2e.

The findings of a second paper suggested that moving from ruminant to non-ruminant meat production could be as effective as an overall, medically motivated reduction in red meat consumption when it comes to lowering GHG emissions. Dyer, Desjardins and colleagues showed that several different production scenarios, combined with the average medical recommendation to reduce red meat consumption by about 24%, would lead to significant decreases in GHG emissions from livestock production.

The first production scenario, including a 50:50 split between beef and pork, and grain-fed beef (the current feedlot industry), could reduce GHG emissions from Canadian agriculture by around 4 Mt CO2e. Modifying this scenario to a 25:75 beef-pork split would make this reduction around 9 Mt CO2e. From this beef-pork split the authors concluded that an overall reduction in the beef industry, combined with an increase in non-ruminant livestock (broilers and pork), would be required to lower emissions further than the medical scenario. Another scenario defined grass-fed beef as slaughter cattle which would continue to be fed forages until slaughter, instead of the grain-fed slaughter cattle which were fattened for market with feed grains. While the difference between these two beef production systems had some effect on the carbon footprint estimates, it was only half of the magnitude of the difference between ruminant and non-ruminant meat production.

In addition, they identified that a large proportion of land used to grow perennial forage for cattle was superfluous to both non-ruminant livestock production and grain-based feedlot beef production. This finding had a profound implication for comparing carbon footprint calculations. Since non-ruminant livestock and feedlot beef cattle can both produce the same amount of protein as grass-fed beef cattle without as much land seeded to perennial forage, the additional land for grass-fed beef would not need to be cultivated for either annual or perennial crops, and carbon could still be sequestered under that land through any other non-agricultural land use that involved permanent cover. Therefore, that sequestered carbon can be discounted from the comparative carbon footprint calculations of these three production systems.

Next steps
The use of animal protein to compare agricultural emissions allows consumers to easily understand how their protein consumption impacts on climate change. The results of the work done by these Canadian scientists essentially quantified how much lower GHG emissions from pigs and poultry livestock systems are than those from ruminant livestock such as cattle, sheep and goats. Despite the enteric methane emissions from cattle and their slow rates of growth and reproduction compared to non-ruminants, raising cattle on perennial forage can sequester atmospheric CO2 and store it as soil carbon. Dyer and Desjardins turned their attention to land use to help resolve this trade-off.

In their simulation, Dyer and Desjardins made the land used for perennial forage interchangeable with annual crop production, meaning that it is not exclusively used to produce red meat. But unimproved grazing land would not be interchangeable with annual crop production since it can only be used for grazing. It is also essential to consider other ways in which land can be used; for example, how much low-quality land is really required for grazing animals, and how much of it could be left as natural habitat to support wildlife?

The GHG-protein indicator results can show consumers and producers the impact of red meat and diversified meat choices on GHG emissions.

Furthermore, land freed up from a reduction in livestock production (particularly beef) could also be harnessed for biofuel crops (energy crops which avoid the burning of fossil carbon), or edible grains, pulses and cooking oils. Overall, livestock species should not be considered in isolation, and the Canadian livestock industry must be considered as a whole, rather than as separate enterprises.

There are further interesting considerations which arise from this work, including the question of whether we should cut out meat from our diets altogether. Since most plant proteins tend not to provide all of the nine essential amino acids that the human body requires, protein quality is as important as protein quantity. These essential amino acids explain why meat, eggs and dairy products, along with some pulses and legumes, are such popular food choices with consumers. 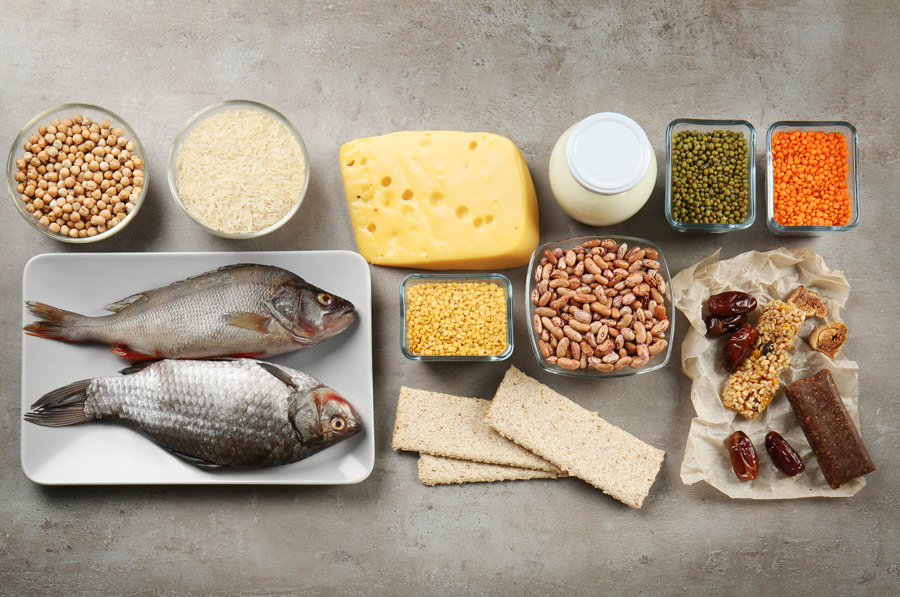 By setting protein consumption as a boundary condition, Dyer and Desjardins posed the broader question of how much animal protein humanity needs to consume, considering land used beyond this demand as an inefficient use of resources. If not used to rear ruminant livestock, this land could be converted back to its natural state, encouraging biodiversity and further carbon sequestration. Dyer and Desjardins highlight that if Canadians followed the red meat guidelines provided by health and medical practitioners, then there would also be a decrease in GHG emissions from livestock production. However, this is hugely dependent on public understanding and implementation of the guidelines.

They suggest that there is still a place for grass-fed beef, but that producers should consider using more of their feed grains to produce pork and chicken, further supporting the recommendation from the 2019 Canada Food Guide about the diversification of protein sources. Moreover, the GHG-protein indicator can be used to inform consumers and producers about the impact of red meat consumption on GHG levels in Canada.

Ultimately, a balance between the amount of livestock needed to meet demand and the amount of land allocated to these systems needs to be optimised. This would provide high-quality protein for human consumption while minimising the contribution of GHG emissions to climate change. The GHG-protein indicator will be a powerful tool in this optimisation process.

How could the research findings help minimise climate change caused by the food sector and consumers?

<> These findings show the potential value of a GHG-protein indicator as a common denominator for reporting the carbon footprint of livestock products. Canadian food retailers could use this information to promote the sustainability of their diversified meat products to consumers. In addition, livestock producer groups could apply these indicator values when assessing the impacts of their production practices. This work adds to the body of knowledge that can be used to make informed decisions from field to fork. 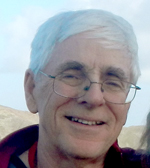 James A. Dyer received an MSc from the University of Guelph in 1975. He worked in Canada as an agro-climatologist and agro-environmental officer until 1997. Since then, Dyer specialised in agricultural GHG emissions as a contract researcher. He has published 67 reviewed journal articles, 13 book chapters and dozens of technical reports. 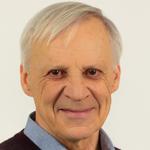 Raymond L. Desjardins, CM, FRSC, PhD is a Canadian agricultural meteorologist who has worked on greenhouse gas and climate change issues related to agriculture for more than 55 years. He is an emeritus scientist at the Ottawa Research and Development Centre of the Science and Technology Branch of Agriculture and Agri-Food Canada.

Dyer and Desjardins have studied the potential impact of reducing and diversifying meat consumption on greenhouse gas (GHG) emissions from livestock production in Canada.

The Science and Technology Branch of Agriculture and Agri-Food Canada