Health & Medicine
For decades, researchers have strived to understand how the immune system recognises and fights cancer, ultimately aiming to exploit and augment these processes to create more effective cancer therapies. Dr Richard Koya, Associate Professor of Oncology, Associate Director of the Center for Immunotherapy, and Director of the Vector Development & Production Facility at Roswell Park Cancer Institute is a prominent researcher in this area. He leads an international team of researchers in developing cutting edge technologies to use patients’ own immune systems to target and kill cancer cells.

Our immune system is not only critical in our defence against bacteria, viruses and other pathogens, but it also plays an instrumental role in preventing and fighting cancer. The immune response to cancer is complex, involving antibodies and a broad repertoire of white blood cell types, including lymphocytes and other leukocytes.

Cancer immunotherapy refers to any strategy that uses the immune system to fight cancer, and several breakthroughs have brought immunotherapy to the forefront of cancer treatment in recent years. Immunotherapy offers several advantages over conventional chemotherapy, including reduced side effects and the potential to suppress cancer reoccurrence through the development of long-lasting immune responses.

Receiving the cancer signal – the T cell receptor
One class of white blood cells, known as T cells, has long been known to play an important role in the immune response to cancer. T cells harbour signalling proteins called T-cell receptors (TCR) on their surfaces, a feature that distinguishes them from other white blood cells. In a complex process, TCRs recognise pathogen- or tumour-specific proteins (known as antigens) that are presented by other immune cells and also cancer cells.

Several T cell subsets exist, each with their own unique TCR and specialised function. Cytotoxic T cells and T helper (Th) cells are characterised by the presence of a CD8 or CD4 receptor on their cell surfaces, respectively. Cytotoxic T cells become activated when they recognise pathogens or tumour cells via their TCR. This is followed by the release of enzymes and toxic proteins that trigger programmed cell death in target cells. Th cells, as their name suggests, help other immune cells by releasing important chemical messengers called cytokines, which refine and regulate immune responses.

The immune system vs. cancer
Continuous advances in the understanding of cancer immunology pave the way for significant clinical translation of novel immunotherapeutic strategies. Cancer vaccines were among the first immunotherapies to emerge in the early 1980s, with the FDA-approved hepatitis B virus (HBV) vaccines developed to prevent chronic HBV-induced liver cancer. In simple terms, cancer vaccines are created using specific tumour antigens (TA) – stimulating the immune system to mount a targeted anti-tumour response.

While cancer vaccines represent an enticing strategy, the presence of immune resistance mechanisms in cancer cells can limit the long-term efficacy of vaccination. Despite intense efforts in cancer vaccine development, progress has been slow in this area. To date, no cancer vaccines have been approved for use in all individuals by both the American Food and Drug Administration (FDA) and the European Medicines Agency (EMA).

While cancer vaccines represent an enticing strategy, the presence of immune resistance mechanisms in cancer cells can limit their long-term efficacy

Adoptive cellular therapy
While efforts to develop cancer vaccines continue, researchers including Dr Koya are continuously exploring other strategies. One such strategy is based on adoptive cell transfer (ACT). This is a form of personalised immunotherapy whereby a small number of T cells are taken from a patient’s blood or tumour, sorted and multiplied in vitro (in the laboratory), and then reinfused into the same patient’s blood – in a similar manner to a blood transfusion. ACT usually follows a period of pre-conditioning chemotherapy known as lymphodepletion, where patients’ overall lymphocyte numbers are reduced to maximise the chances of proliferation of the newly infused T cells.

The potential of ACT was first demonstrated by the National Cancer Institute (US) following long-standing observations that the presence of tumour infiltrating lymphocytes (TILs) is associated with improved clinical outcomes in a broad range of cancers. TILs refer to any white blood cells that leave the bloodstream and migrate into a tumour. While early ACT attempts using in vitro-selected TILs seemed promising, methods for isolating and processing TILs are labour-intensive and only benefit a subset of cancer patients. 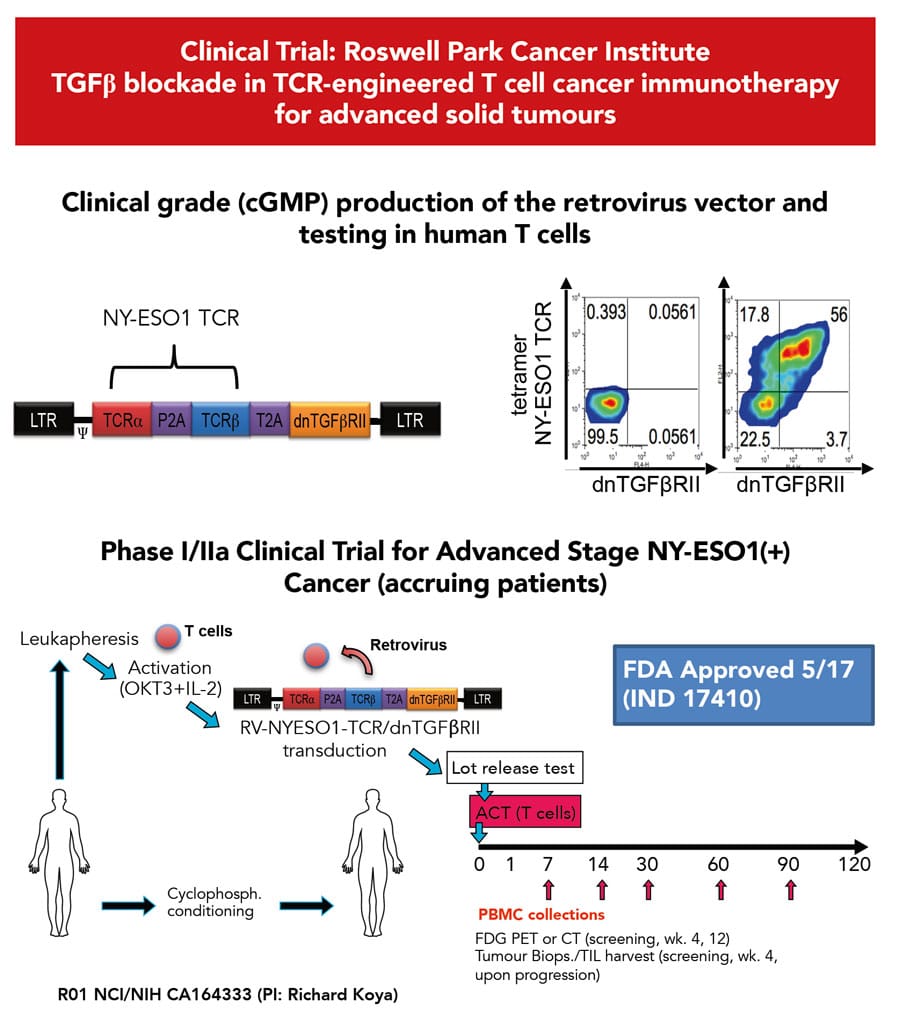 TCR-engineered T cell immunotherapy – it’s in the genes!
For more than a decade, Dr Koya has focused on advancing ACT for highly specific and sustained cancer treatment. His research centres specifically on TCR-Engineered T Cell Immunotherapy, using genetic engineering to reprogramme or ‘re-educate T cells to deliver a lethal hit on malignant cells in an extremely precise and efficient way’.

Dr Koya’s group utilises viral DNA to inject TA-specific TCRs into T cells. These newly inserted receptors then target these cells to the tumour in a highly specific manner. This approach improves ACT, because the engineered T cells are superior in targeting tumours than the in vitro-selected TILS used in earlier ACT attempts. In other words, T cells are reprogrammed specifically to destroy cancer cells. By expanding these cells under specialised laboratory conditions, billions of highly active tumour-specific T cells can be injected back into the patient, targeting tumours with high efficiency and specificity.

Engineered T cell ACT has the potential to target any kind of cancer, but the most widely studied cancer to date is metastatic melanoma.

From lab to clinic
Previous studies performed under Dr Koya’s guidance, and indeed by other research groups, have revealed dramatic clinical responses with ACT therapy using TCR-engineered T cells in patients with metastatic melanoma. However, while response rates often exceed 50%, relapse is eventually seen in most patients. Dr Koya’s group hypothesises that the highly active TCR-engineered T cells eventually succumb to the immunosuppressive tumour microenvironment – an environment that is imposed largely by the secretion of a transforming growth factor beta (TGF-β) by tumour cells. This hypothesis is supported by Dr Koya’s previous clinical trial experiences, and is currently being tested in a new National Institutes of Health-funded prospective clinical trial at Roswell Park Cancer Institute, led by Dr Koya.

Previous clinical trials based on ACT have mainly focused on the use of cytotoxic T cells only. However, evidence is growing for the efficacy of Th cells in ACT. Since Th cells are now known to promote the maintenance of cytotoxic T cell responses against cancer cells, as well as rescuing exhausted T cells, it is anticipated that sustained immune responses can be realised by the synergy of CD8TCR- and CD4TCR-engineered T cells. This idea is likely to be investigated in future clinical trials with ACT. Another avenue under investigation is the combination of ACT with therapies that block other cellular pathways used by cancer cells to evade the immune system.

Immunotherapy is an exciting area, and new approaches currently dominate ongoing clinical trials in the pursuit of effective, personalised cancer treatments. These therapies might one day become the standard of care for cancer patients.

What has been the biggest technical challenge in your research to date?
<>The biggest challenge in my research was to select among many candidates the most efficient and more specific TCR to target a Tumour Associated Antigen that is in cancer but not in normal tissues.

Do you believe that future developments in immunotherapy will one day completely replace conventional chemotherapeutic approaches?
<>I would not say replace completely since some chemo-agents are also useful to prime the cancer cells, making them more susceptible to immunotherapies.
Are there likely to be undesired effects or safety issues with widespread use of ACT?
The main issue that sometimes accompanies ACT is the widespread inflammation that can happen in certain patients with certain types of cancer, a side effect called cytokine release syndrome. This is much less common in TCR-based therapies, but much more prevalent with CAR-T cell, another modality of ACT.

There is no tumour type against which ACT will be ineffective; any solid or liquid tumour can be targeted by ACT

Do you anticipate that patients can be resubjected to ACT after a relapse?
<>Yes, and this is also a plan we are pursuing. The point is that in early-phase clinical trials, the FDA recommends a trial with a single dose to first check for side-effects, as safety is paramount.

Are there tumour types that ACT is unlikely to be effective against?
<>Actually no. Any solid or liquid tumour can be targeted by ACT. 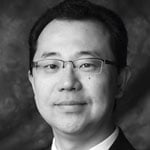 Dr Koya received his MD in 1991 and completed his residence in Internal Medicine and fellowship in Clinical Oncology at UFRGS, Brazil. He received his PhD in Molecular Biology & Pathology from Hokkaido University in 2001. From 2001–2003 he pursued a postdoctoral fellowship at USC, Los Angeles, before joining UCLA in 2003. He became Associate Professor of Oncology at RPCI in 2013.

Dr Koya’s research focuses on developing innovative ways to utilise the patients’ own immune system to target and kill cancer cells. His approach is based on genetic engineering of a subset of immune cells called T lymphocytes, by utilising viral vectors to re-programme these immune cells.