Health & Medicine
Wouldn’t it be great if a small non-toxic molecule could be used to treat cancer? By investigating the possibility of using a cancer cell’s own physiology as a weapon against it, Dr Shoukat Dedhar, at the University of British Columbia, is developing a new treatment that could help prevent tumour growth and metastasis.

Every two minutes, someone in the UK is told they have cancer, with one out of every two people likely to be diagnosed at some point in their lives. The disease is the world’s second leading cause of death, and was responsible for nearly nine million global deaths back in 2015.

Current treatment methods involve the removal of cancer cells either through surgery or via radiation or toxic chemicals. However, cancer cells are tricky, and it is very difficult to eradicate every single one of them. If the cancer has metastasised (spread from the original tumour to another part of the body), surgery can rarely remove every cell, and treatments that typically kill cancer cells are generally toxic to normal cells as well. If even a few cancerous cells remain, they can cause a resurgence of the disease. Think of it like an ant’s nest – you can get rid of nearly all of them, but leaving just two or three could be enough for the nest to reappear down the line. 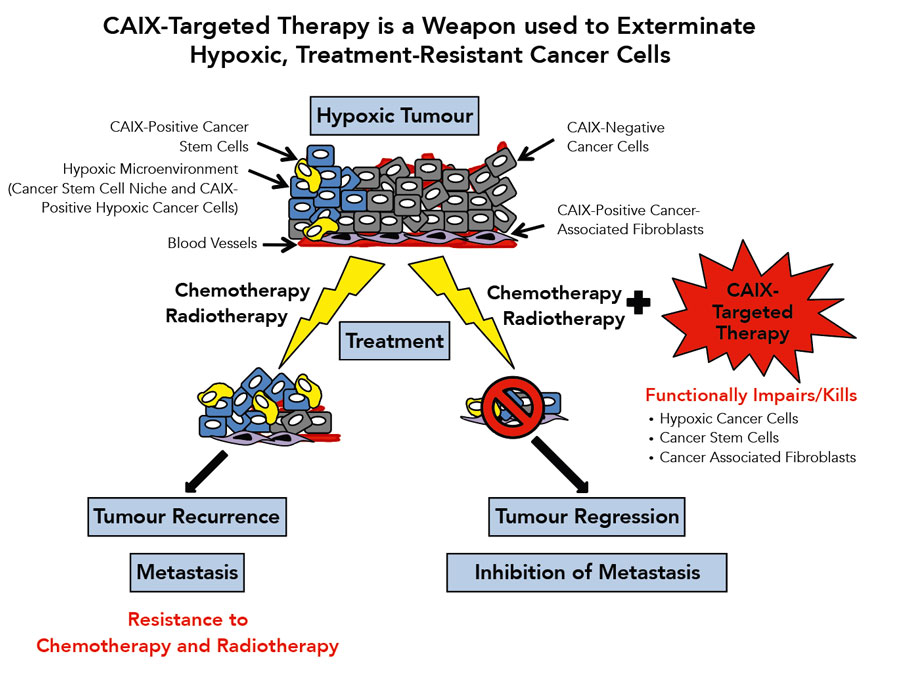 Dr Dedhar and his team are investigating a new type of treatment, which takes advantage of the unique physiology of cancer cells. It aims to inhibit their growth and ability to metastasise, without damaging healthy body cells. The results so far have proved very encouraging.

A hostile environment
To understand how the new treatment works, we must first understand the inner workings of a tumour. Tumours are made up of millions of cells and, as each one grows, the blood supply required to nourish the rapidly dividing cancer cells with oxygen and nutrients becomes inadequate, causing regions of the tumour to become hypoxic (low in oxygen). Like normal body cells, cancer cells cannot survive without oxygen, so to overcome this, they stabilise a very important protein called HIF-1α (hypoxia inducible factor 1 alpha). This protein mediates the activation of numerous genes vital for the adaptation of cancer cells to the hypoxic environment.

Through HIF-1α, cancer cells in hypoxic regions of the tumour begin producing proteins that trigger the growth of hundreds of capillaries from nearby blood vessels. These new capillaries provide the tumour with additional oxygen and nutrients, whilst also removing waste products such as carbon dioxide. However, the capillaries are often leaky and deformed, so – although they allow the tumour to grow bigger and more quickly – the hypoxic micro-environments inside the tumour remain.

To compound the problem, hypoxic cancer cells alter the way they produce energy and cellular building blocks, such as proteins and fats, to continue their growth in the absence of oxygen. This altered metabolism produces acidic waste products that build up inside and outside the cells. If cancer cells cannot adapt to the hostile, acidic micro-environment present in hypoxic parts of the tumour, they will soon die. 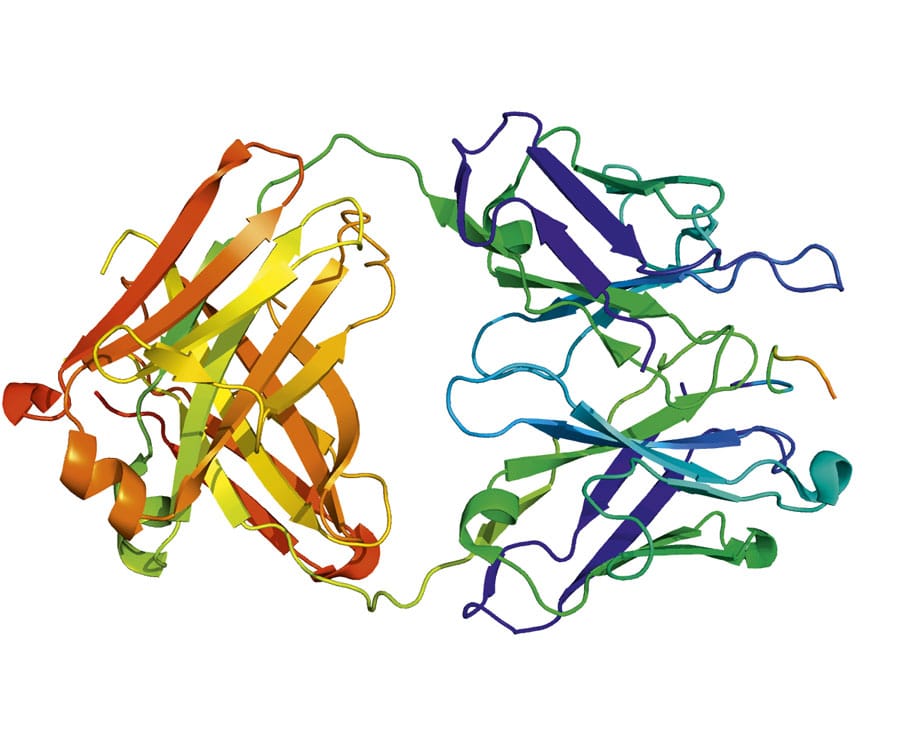 Adapt or die
As part of their adaptive response, cancer cells begin producing a cell membrane-bound protein called carbonic anhydrase IX (CAIX). CAIX converts carbon dioxide from outside the cell into bicarbonate and protons. The bicarbonate is then transported into the cell to reduce the intra-cellular acidity, providing a survival benefit for these cells. The protons remain outside and contribute to the acidification of the micro-environment. Creating this acidic environment causes cancer stem cells to divide more rapidly, enhancing their ability to invade healthy tissue and metastasise across the body.

An attractive target
Since cancer cells become absolutely dependent on CAIX to reduce acidification and thus promote their survival, this requirement becomes their “Achilles heel”, thus making CAIX a promising target for cancer therapy. CAIX is an attractive target for anti-cancer therapies for several reasons. First, it is only produced by cancer cells, so could be inhibited with no harmful effects to normal cells. Second, it is critical for the survival of cancer stem cells and their ability to invade healthy tissue. And third, its position on the outer surface of the cell membrane makes it a relatively easy target for drugs.

CAIX is produced in large amounts by cancer cells that metastasise, and Dr Dedhar has shown that if CAIX expression is depleted, cancer stem cells no longer function properly, blocking metastasis. His study, and others like it, have provided proof-of-principle data that CAIX inhibition could provide a therapeutic benefit in treating cancer.

By targeting CAIX, we may be able to overcome resistance to chemotherapy and radiotherapy, tumour recurrence
and metastasis

Dr Dedhar believes that by targeting CAIX, we may be able to overcome resistance to chemotherapy and radiotherapy, tumour recurrence and metastasis. He and his team have developed a targeted small molecule inhibitor of CAIX and have shown that this inhibitor reduces tumour growth and metastasis in models of human cancer. Inhibition of CAIX in human breast cancer cells in the laboratory prevented breast cancer stem cells from dividing and replenishing the cell population in hypoxia. The team also tested the CAIX inhibitor in a mouse model of breast cancer, with CAIX inhibition resulting in a significant depletion of tumorous cancer stem cells. Combination treatment using the inhibitor with paclitaxel (a chemotherapy drug) was also found to enhance tumour growth delay and completely eradicate metastasis of cancer cells to the lungs, when compared to treatment with paclitaxel alone.

The team have recently completed a phase 1 safety clinical trial of the CAIX inhibitor, with findings showing it to be safe and well tolerated by patients. They are now embarking on clinical trials in which the CAIX inhibitor can be combined with standard chemotherapy regimens, and Dr Dedhar anticipates significant, additive effects on tumour growth – especially on recurrence and metastasis. Through his team’s tireless work, a cancer diagnosis might not be the death sentence it once was.

How did you first become interested in CAIX?
We were carrying out research to identify causative genes in breast cancer metastasis. <>We discovered that a set of genes were active in tumour cells that had the capacity to form metastases, but were silent in tumours that did not have this capacity. Interestingly, all of these genes are activated by hypoxia and HIF-1, and one of the most active genes was CAIX. We proved that CAIX was indeed required for breast cancer cells to metastasise by depleting CAIX from the cells with metastatic capacity: this depletion resulted in the almost complete loss of metastatic ability.

Could the CAIX inhibitor be used on its own to treat cancer without the need for chemotherapy?
<>Since only a proportion of cancer cells within a tumour produce CAIX (the proportion can vary from 20% to as much as 80%), it is unlikely that CAIX inhibitor monotherapy would be effective in eradicating the tumour. On the other hand, while both radiation and chemotherapy will effectively kill the majority of tumour cells, they are ineffective in killing tumour cells within the hypoxic niches which should be killed by inhibitors such as the CAIX inhibitor. Our recent, unpublished work also demonstrates that inhibiting CAIX makes chemotherapy agents such as temozolomide and gemcitabine, more effective. While we do not understand the reason for this, it is likely that inhibiting CAIX changes the tumour physiology in such a way as to make the tumour cells more sensitive to the chemotherapy agents.

Can you describe the mouse breast cancer model that was used to test the CAIX inhibitor?
<>We have used several mouse tumour models to test the CAIX inhibitor. Our initial model was transplantation of breast cancer cells into the mammary fat pad of the mouse. This results in the formation of a breast tumour within the mammary gland of the mouse. Once the tumour reached a reasonable size so that it could be palpated, we started administering the CAIX inhibitor orally on a daily basis for approximately 21 days. Control mice received only the “vehicle” used to dissolve the CAIX inhibitor. Tumour volumes were measured daily and the results tabulated. We had also “tagged” the tumour cells so that they could be followed in the mouse using an imaging instrument called IVIS. This allowed us to determine the extent of spread, or “metastasis”, of the tumour in the control and treated mice

What will the clinical trial of the CAIX inhibitor involve?
<>Having completed the Phase 1 Safety trial with the CAIX inhibitor, we can now embark on clinical trials to test the efficacy of the compound. Our next trial will be a multi-centre Phase 1b/Phase 2 trial in patients with CAIX-positive pancreatic ductal adenocarcinoma, or PDAC. These cancers are very difficult to treat with current therapeutic regimes, and we have found that PDAC patient tumours are very hypoxic and about 40–60% of the cells produce CAIX. Furthermore, our pre-clinical data in mouse models of PDAC demonstrate that adding the CAIX inhibitor to the standard of care therapeutic, gemcitabine, results in substantial survival benefit, with depletion of cancer stem cells. Thus, the clinical trial will involve treatment of CAIX-positive patients with a combination of gemcitabine and CAIX inhibitor. We will measure a number of parameters, including circulating drug levels, and whether cancer stem cells are depleted in the tumours, but a major end point will be to determine whether there was any benefit in progression-free survival. Similar trials are in the planning stages for “triple-negative“ breast cancer and glioblastoma (brain cancer). 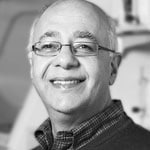 Dr Dedhar received his BSc (Hons) in Biochemistry from the University in Aberdeen, Scotland, and his PhD from the University of British Columbia, Canada in 1984. He carried out a Postdoctoral Fellowship in the laboratory of Dr Erkki Ruoslahti at the Burnham Institute, in La Jolla, California, USA.

Dr Dedhar’s research focuses on the role of ILK signalling in cancer progression, the molecular basis and targeting of centrosome clustering in cancer cells, and the therapeutic targeting of tumour hypoxia effectors, Carbonic Anhydrases IX and XII.