Behavioural Sciences
Sleep is vital to our health and yet remains understudied in young people and especially in its links to behaviours. Professor Alexander Vazsonyi at the University of Kentucky is focused on highlighting the role of sleep in problem behaviours in adolescents. His work on sleep unearths some important influences on deviant behaviour but also points to ways that young people can be supported to avoid such antisocial behaviours.

As anyone with a newborn will tell you, sleep is vital to our ability to function at our best. Research over the last years has shown that sleep is key to healthy living and a crucial cog in maintaining physical and mental health. Sleep quality and length has been linked to a number of health issues including heart and blood vessel health, cognitive conditions, obesity and cancer risk. The quality of sleep has also been associated with depression and anxiety, with poor sleep involved in almost all psychiatric conditions.

Sleep need changes over a lifetime, with newborns sleeping for the majority of the day, teenagers needing up to ten hours and mid-life adults requiring around eight hours of sleep. Sleep is intrinsically linked to circadian rhythms – our internal body clock – dictating our sleepiness at certain times of day. Adolescents typically have an ‘owl’ chronotype, staying up late and sleeping in late during the day. The natural sleep cycle for teens often conflicts with their school schedule, and this period of life is notoriously linked with poor sleep.

Signs of poor sleep include trouble falling asleep, waking up multiple times throughout the night, excessive daytime sleepiness, and not being able to fall back asleep after waking. Poor sleep makes it difficult to concentrate and to store and retain information, and lack of sleep can impair school performance for many adolescents. Psychologists are also starting to understand that poor sleep can be linked to aggression and low self-esteem. Now, researchers are turning their attention to how sleep impacts our behaviours. 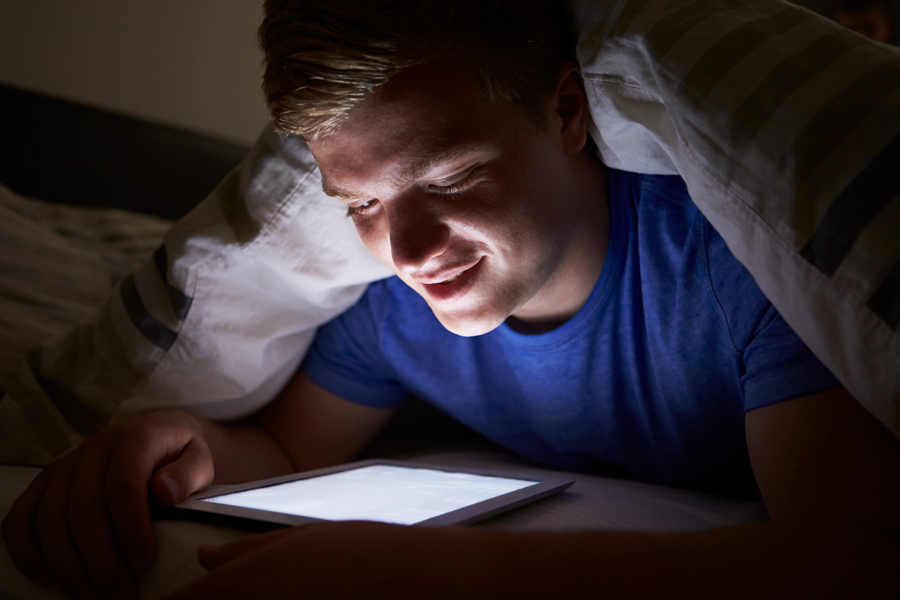 Sleep and behaviour
Sleep is known to be related to ‘norm-violating’ or deviant behaviours – actions that go against the informal rules of how society works. Precisely how sleep affects these forms of behaviours remains unknown. Alexander T. Vazsonyi, Professor of Family Sciences and Director of the Adolescent Development Lab at the University of Kentucky, is an authority in the field of adolescence. His work focuses on the transition between childhood and adolescence and the onset of problem behaviours, violence and deviance. Prof Vazsonyi – who is also Editor-In-Chief of the Journal of Early Adolescence – is interested in the role of culture and wider societal influences on adolescent behaviour. He is therefore conducting research in a number of countries. Prof Vazsonyi’s recent work has also focused on sleep, and particularly how sleep is interwoven with other factors to influence adolescent behaviour. An important paper from his group has recently delved deeper into the relationships between sleep and self-control. Self-control is part of what is known as ‘executive function’ – a crucial part of cognition that includes planning, attention and the ability to switch between tasks. Several studies have linked poor sleep to poor executive functioning, including low self-control.

Sleep is known to be related to ‘norm-violating’ or deviant behaviours – actions that go against the informal rules of how society works.

Low self-control has been associated with a number of norm-violating behaviours, including young age alcohol and drug use, delinquency, and deviance. In a recent meta-analysis, Prof Vazsonyi and colleagues looked at studies that had examined the relationship between self-control and deviance between 2000 and 2010, using statistical techniques to explore correlations in both cross-sectional (i.e. looking at data at one specific point in time) and long-term (i.e. repeated observations of variables over a longer period of time) studies. They showed substantial support for low self-control being a factor in deviance. These findings support the ‘self-control theory’ first put forward by criminologists Travis Hirschi and Michael Gottfredson in 1990 to explain crime. The analysis of a decade’s worth of studies showed convincing evidence of a strong link between low self-control and deviance or crime across studies with different assessments, designs, measures of deviance and across cultures and demographic groups.

Sleep and its relationship with deviance and low self-control
In a recent paper in the Journal of Adolescence, Prof Vazsonyi and colleagues set out to understand more about how sleep contributes to the link between self-control and deviant behaviours. They did this by looking at almost 6,900 high school students in Switzerland, considering self-control across a variety of immigration and socio-economic groups.

The researchers employed statistical techniques known as structural equation modelling, which allows scientists to investigate the relationships between both measured variables and latent, or inferred, variables. The team found that the effect of sleep problems on delinquency was indeed moderated in part by low self-control. Sleep problems predicted lower self-control and in turn greater delinquency across cultural and socioeconomic groups. This is an important step in highlighting ways that young people can be influenced, and indeed helped, by sleep.

Cultural effects
This study was particularly important because it gathered data from a large sample of teenagers – with the support of the Swiss Federal Office of Public Health – representing the national population. It revealed differences in sleep, with the Swiss native young people (Swiss-born and Swiss parents) reporting better sleep than young people from first- and second-generation immigrant families, highlighting that immigrant families are most in need of sleep support. Studies examining ethnicity, race or immigrant status are very scarce; however, addressing this is crucial to shedding light on cultural influence, highlighting at-risk groups and establishing the importance and validity of American-based theories across other countries.

Parental input
The influence of family is key to the wellbeing of teenagers and has a significant effect on physical and mental health. Children who grow up in homes with conflict are known to have poorer sleep. Similarly, love, warmth and supportive parenting styles are linked to less externalising behaviours. Prof Vazsonyi and colleagues recently undertook a study to understand the ways in which sleep could be involved in the effect of parenting on problem behaviours. They specifically looked at parental warmth and deviance – alcohol and drug use – in teens in Georgia and Switzerland.

Sleep was found to mediate the effect of parental warmth on problem behaviours, highlighting sleep as a mechanism that impacts parenting efforts on behaviour. They found a relationship between positive parenting – measured as warmth – and sleep in both countries. This is consistent with findings from previous studies stating that parental influences can improve adolescents’ sleep and that young people living in homes with high monitoring have more regular sleep patterns and better-quality sleep.

Implications for intervention
The Journal of Adolescence study of low self-control has several important implications. In noting that poor sleep is linked with both low self-control and deviance, a reasonable inference is that tackling one of these areas could have positive outcomes on the other. Primary prevention efforts to help support adolescents avoid deviance by tackling low self-control, which has been shown to be malleable, could be the way forward.

Better sleep could be encouraged by better sleep hygiene. Sleep hygiene refers to the environment and rituals around sleeping – for example, no bright lights in the bedroom around sleep times, maintaining stricter bedtimes and limiting screen use late in the day. Interventions that could improve sleep might reasonably be expected to reduce norm-violating behaviours and improve self-control.

The findings also suggest that improving child-parent relationships could also be beneficial, both in improving sleep and decreasing deviant behaviour. Likewise, better-quality sleep could improve family relationships. This is true across cultures; however, given the finding that young people from immigrant backgrounds have more sleep issues, these groups may be in greatest need for interventions to improve their sleep. Previous work by Prof Vazsonyi has shown that first and second-generation Swiss immigrant children are at higher risk of internalising conditions including depression. Since mental health conditions link with sleep too, this could also be an area that is improved with better sleep in young people.

Why we can’t sleep on it
The work by Prof Vazsonyi and colleagues makes it clear that poor sleep is an issue with widespread consequences for teenagers that go further than low concentration or poor school performance. Their findings not only show the relationships but also pinpoint the mediating factors (variables that link poor sleep and deviance, such as poor family relationships or other stressors) that could be part-responsible for the effects of poor sleep on deviance. Importantly, these are areas that could be tackled in interventions. Teenagers across the world have a paucity of sleep and a wealth of sleep issues. This is particularly true of immigrant young people who are most at risk of poor sleep. Helping families to support their young people to sleep better should be a priority to affect change not only for adolescent health but also to reduce societal problems such as vandalism and aggression across different demographic groups.

What are the underlying reasons for the difference in sleep quality between adolescents of Swiss-born and immigrant parents?

<> This is a challenging question that likely has many potential answers. It is possible that children and adolescents of immigrant parents experience systematically different amounts and levels of daily stressors, including overt or covert issues of discrimination, ranging from where they reside in a community to the type of school they attend. This includes attending schools with disproportionately higher levels of immigrant youth, impacting educational experiences in the classroom due to language comprehension problems as well as teacher effectiveness in delivering subject content. High amounts of perceived stress result in mental health challenges that are known to impact sleep and vice versa.

How, in your opinion, might families best be helped?
Families can be best helped by providing parents with key information about the importance of sleep and how to best support healthy sleeping in their children and adolescents. This might include specific suggestions about bedtime routines and rituals, but also of developing habits at home related to the use of electronic devices that are particularly likely to interfere with youth maintaining and reaching adequate sleep behaviour goals. In addition, both teenagers and adolescents can be better educated, in a playful and informative manner, of why sleep is important and what behaviours most interfere with sleep in their daily lives, and how to make changes in these.

How sleep may be key to antisocial behaviour in young people was last modified: September 2nd, 2020

Alexander T. Vazsonyi is Professor of Family Sciences, Professor of Psychology, and Professor of Sociology at the University of Kentucky. He is recognised for his work on child and adolescent development, particularly cross-cultural comparative research ranging from family context to larger cultural developmental processes, as well as on self-control theory.

Data collection was supported by the Swiss Federal Office of Public Health (contract 00.001721/2.24.02.-81 to PA Michaud, Professor Emeritus, University of Lausanne, Switzerland) and with the financial support of participating cantons.

Vazsonyi, A.T. (2020). How sleep may be key to antisocial behaviour in young people. Research OUTREACH, 116. Available at: https://researchoutreach.org/articles/sleep-key-antisocial-behaviour-young-people/ (Accessed YYYY/MM/DD)