Physical Sciences
Light has many incredible properties. They range from its strange duality of behaviour, acting either as a wave or a particle, to demonstrating incredible nonlinear effects that can be exploited with laser and optical technologies. One such property is the ability of light waves to form solitons when they pass through materials like optical fibres. Solitons, or solitary waves, occur when all the different colours of light travel as a single waveform. Professor Dingyuan Tang at Nanyang Technological University in Singapore has been using fibre lasers to see, for the first time, experimental evidence of unusual vector solitons.

We are all familiar with the field of electronics. We have electronics in our computers, household appliances and phones. Electronics is all about using technologies like semiconductors or switches to control the flow of electrons. Once we can control their flow and switch them off and on at will, it is possible to create more complex systems and logic circuits that can lead to highly sophisticated electronic devices.

It is possible to use light, or packets of light energy called photons, in exactly the same way as electrons are used in electronic circuits. This field is known as photonics and at its heart is the creation of technologies to control the behaviour of photons to create photonic devices that are analogous to their electronic counterparts.

One familiar example of photonics technology is the optical fibre. Most homes with fast internet connections rely on bundles of silica glass fibres that bounce pulses of light millions of times along their length to transfer information. The advantage of optical fibres over traditional conducting copper wires is that information sent this way can travel quite literally at the speed of light.

With a few modifications to the fibre design, optical fibres can be used to control and shape light in different ways. Prof Dingyuan Tang at Nanyang Technological University and his collaborators have been using fibre technologies to construct new types of lasers to investigate some of the fundamental physics of how light can behave when it passes through different media.

A tricky passage
When we see white light, what we don’t see are all the thousands of different colours of light that combine to make its white appearance. In his famous experiment in 1666, Isaac Newton showed that a prism can be used to separate all the different component colours of the white light to make a spread of colours that we often call a rainbow.

The prism experiment works because each wavelength of light travels at a different speed when it is in the prism. This changes the angle of refraction and so blue light, that is slowed down the most in the prism, is bent by the largest angle. The opposite is true for red light. This effect is known as dispersion and occurs in any media, including optical fibres. If we think of the intensity distribution of a single pulse of light entering a fibre, that might look like a narrow, peaked mountain; if there is a large amount of dispersion in the fibre, the light pulse will exit looking like a much broader, flatter hill.

It is possible to use light, or packets of light energy called photons, in exactly the same way as electrons are used in electronic circuits.

Controlling the degree of dispersion caused by a fibre is one way of controlling the light pulse but there is another effect to contend with, which is particularly important when intense light sources like lasers are used. This is the optical Kerr effect. Since light is an electromagnetic wave, whenever it enters a medium like a prism, the oscillating electric field of the incoming beam changes the refractive index of the medium. This, in turns, changes the amount of dispersion that the material causes the light to undergo and is an example of a nonlinear effect known as self-phase modulation.

Prof Tang has been fascinated by the regime in which these dispersive and nonlinear effects are perfectly balanced. Normally, as light passes through long fibres, the dispersive effects cause individual wavelengths to travel differently, changing the shape of the light pulse. Each of these wavelengths will also experience a degree of self-phase modulation related to the strength of their electric field.

However, in a regime where the amount of dispersion inherent to the material is compensated by the changes caused by the self-phase modulation, it is possible for the light pulse to pass through the fibre completely unchanged in shape and form – this is known as a soliton. Other types of waves, such as tidal waves on rivers, can also form solitons with the correct geography and wave speeds.

Prof Tang’s search for solitons has focused on using single mode optical fibres. These are specially designed fibres that only allow a single mode, or pattern, of light to pass through. The pattern of light depends on how the electric field oscillates relative to its direction of travel and a single light pulse can contain many different modes. Use of single mode fibres restricts this to just one mode, known as the transverse mode.

Prof Tang and his team’s remarkable achievement is an important step in understanding the accuracy of the nonlinear equations used to model soliton formation.

To control all of these aspects of the light pulse required Prof Tang and his team to design and build a very specific type of fibre laser that could be used in either the normal or anomalous dispersion regime with very careful control over the amount of birefringence.

By doing this, the team could form either dark-bright or anti-dark-bright vector solitons simultaneously, the first time that they had been observed experimentally after their theoretical prediction over 18 years ago. They were also able to see that dark-dark (as opposed to single dark solitons) or bright-bright solitons could be formed in the birefringent media, suggesting that such coupled solitons were formed due to the cross-polarisation of the light fields.

Prof Tang and his team’s remarkable achievement is an important step in understanding the accuracy of the nonlinear equations used to model soliton formation. By verifying these predictions, they have shown that these nonlinear models can be used for subsequent optical fibre design, be it for fibre lasers or optical communication, opening up new possibilities for the reaction of photonics technologies.

What was the most challenging part of developing the fibre laser?

<>A fiber laser is an excellent experimental testbed for studying optical solitons. Depending on the fiber cavity designs and laser operation conditions, different forms of optical solitons can be revealed. To realise the dark-bright or anti-dark-bright vector solitons in a fiber laser, the key is to carefully design and construct the laser so that both the net cavity dispersion and birefringence can simultaneously be tuned close to zero. The vector solitons are formed as a result of the cross-polarisation coupling of the light circulating in the laser.

A trick of the light: Discovering Dark-Bright and Anti-Dark-Bright Solitons was last modified: August 3rd, 2020 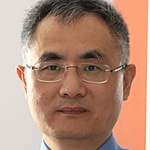 Prof Tang received his PhD in Physics from University of Hannover, Germany in 1993. His current research is in the fields of laser physics and technology, nonlinear optics, and ceramic laser materials.

Professor Tang’s research experiments have confirmed the existence of dark-bright and anti-dark-bright vector solitons first predicted by D.J. Frantzeskakis around 18 years ago.