Health & Medicine
Despite huge amounts of research, many aspects of cancer remain mysterious. One of these is the process of tumorigenesis – the very earliest stages of tumour development. John Evans, Emeritus Professor at the University of Otago, New Zealand, has drawn together a wealth of evidence to suggest that the extracellular matrix, the network of proteins and carbohydrates that surrounds cells, plays a crucial role in initial tumour development. This work offers routes towards valuable new research possibilities, including potential new targets for cancer treatments.

According to the World Health Organization, cancer is one of the leading causes of death worldwide, second only to cardiovascular disease. Most of us will be affected by cancer in some way at some point in our lives. Despite growing awareness of cancer – and the vast amounts of funding allocated to research, prevention and treatment – there are still many unanswered questions. One of the most significant questions is how cancer begins. What triggers a previously normal cell to become cancerous? If we know how this process of tumour initiation happens, then perhaps we can discover how to prevent the disease taking hold.

Could a cell’s environment cause cancer?
Professor John Evans is a cancer biology expert at the University of Otago. Several years ago, Professor Evans, Professor Alkaisi and their colleagues developed a novel bioimprinting methodology. Bioimprinting is the process of replicating biological cells at high resolution in a non-biological substrate (in this case, a type of acrylic polymer); use of bioimprints has a number of advantages over traditional in vitro cell culture, which struggles to replicate real conditions within the body. The development of the new bioimprinting method was driven by the knowledge that a cell’s physical environment is crucial to its ability to function. In fact, Professor Evans found that the growth of the cancer cells used in this research changed when their physical environment was altered, but without gene variation or altering growth factors. This prompted a more in-depth investigation of the possible role of a cancer cell’s environment in the development of the disease.

In a recent study, Professor Evans and Professor Alkaisi were joined by Associate Professor Sykes in reviewing a wealth of evidence relating to the very earliest stages of cancer development. In particular, Professor Evans and his colleagues looked at the possible role of the extracellular matrix (ECM) in cancer. The ECM is a structural scaffold, or mesh, that surrounds cells. The ECM is composed of various proteins, particularly collagen, and carbohydrates. It has many important functions, including in regulating cell growth and metabolism. 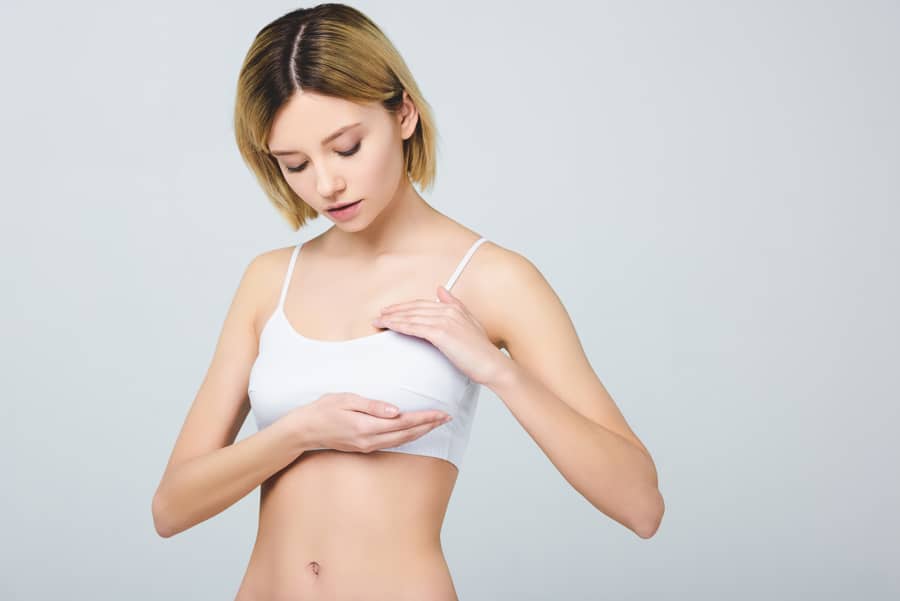 Professor Evans suggests that, under normal conditions, the ECM actually inhibits the development of cancer by suppressing cancer-linked genes (sometimes referred to as oncogenes). One well-known example of this type of gene is the BRCA; 45-60% of women who carry the BRCA mutation develop breast cancer by the age of 70. However, this means that the remaining 40-55% of women with BRCA mutation do not develop cancer, suggesting that something is preventing the expression of the mutation in these cases. That “something” could be a normal ECM.

However, sometimes the ECM is disrupted. It may then no longer be able to properly regulate cell behaviour, allowing cancer to develop. Professor Evans uses the term “loaded” to describe the presence of a cancer-causing genetic mutation, such as of BRCA, and “trigger” to describe the effect of a disrupted ECM.

Under normal conditions, the ECM actually inhibits the development of cancer by suppressing cancer-linked genes.

How is the ECM disrupted?
Professor Evans and his colleagues began by establishing a link between the ECM and cancer cells. They found a significant amount of evidence that demonstrates that physical characteristics of the ECM, such as the layout and structure, can have an effect on the function of cells within the ECM. Disturbance of, for example, the collagen of the ECM has the potential to disrupt homeostasis – the maintenance of a constant environment – and therefore affect the cell’s ability to function. 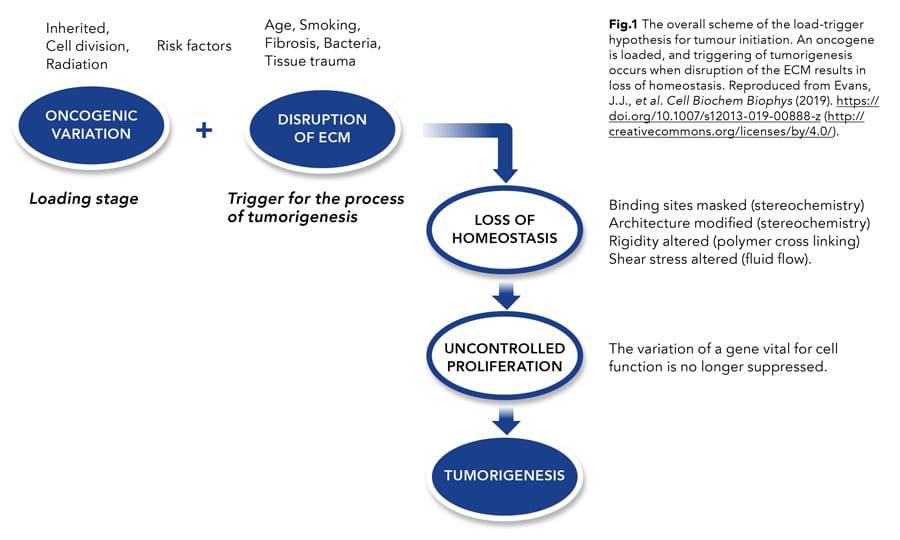 There are numerous ways in which the physical structure of the ECM might be altered. One factor that affects collagen characteristics, and which we are all likely to experience, is ageing. Visibly, in skin, as we age, collagen that is neatly and tightly structured in young individuals becomes fragmented and disorganised leading to looser, more wrinkled skin.

Research has shown that, in older tissue, the homeostatic controls that maintain collagen structure begin to malfunction. The subsequent breakdown of the architecture of the ECM may be a trigger for cancer. Logically, this should mean that, if ageing leads to ECM disruption, cancer should be more common in old age; in fact, this is most often the case. Interestingly, this idea was supported by research showing that breast tissue ages more quickly than other tissues in the body, perhaps explaining why breast cancer tends to affect younger women.

Lifestyle factors such as smoking can also affect the structure of the ECM. Microscopic particles in cigarette smoke enter the body and can block the filtering function of the ECM, causing it to malfunction. Radiation can destabilise the collagen of the ECM, while inflammation due to injury can result in delayed repair of the ECM. Injury and scarring can also lead to permanent damage to the ECM; there is some evidence to suggest that certain types of cancer are more likely to arise in scar tissue. Any of these disruptive factors could impair the ability of the ECM to block tumour development.

Repairing the ECM
If a disrupted ECM allows cancer to develop, then it is possible that returning the ECM to a normal state might stop a tumour in its tracks. Mechanical treatment, via tension or compression, might be beneficial to the structure of the ECM. Certain forms of radiation could also have the same effect. This type of treatment could potentially halt the development of a tumour, allowing much earlier treatment and a better prognosis. It is possible that, also, abnormal communication between the ECM and a cell could trigger the expression of a cancer-causing gene. If this is the case, interrupting that communication might block the signals that trigger a cell to become cancerous. However, there has not yet been enough research in this area to truly understand the potential of repairing the ECM in preventing cancer.

It is possible that returning the ECM
to a normal state might stop a tumour in its tracks.

Tumorigenesis and the cancer pathway
Tumour initiation is just one part of the sequence of events that lead to cancer. Nevertheless, the evidence gathered by Professors Evans, Alkaisi and Sykes supports the idea that the primary trigger for the development of cancer is biophysical factors (i.e. the effects of physical forces exerted by the ECM), in the presence of a gene that is known to be linked to cancer. This finding is particularly important in light of recent research showing that some genetic mutations associated with cancer are also commonly found in healthy cells. 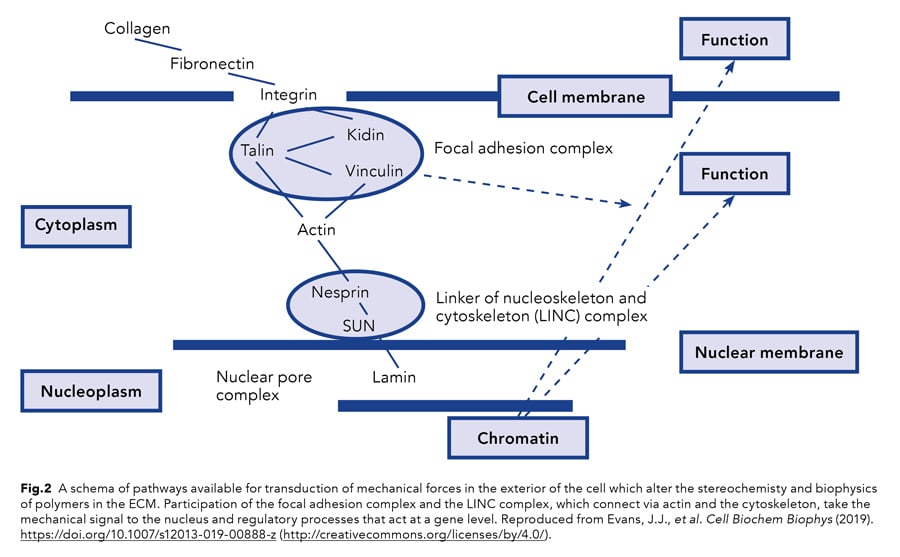 In fact, there are several examples of recently-observed phenomenon that might be explained in the context of the ECM. One of these is the cancer malignant mesothelioma, which can be caused by exposure to asbestos. It takes an average of 50 years for mesothelioma to develop following asbestos exposure. The condition has been linked to changes in collagen architecture as a result of inflammation, along with certain inherited genetic mutations. Other similar examples have been found in ovarian cancer and childhood leukaemia.

A potential new treatment route
Professor Evans suggests that the ECM offers a potential new route for cancer treatment. There are a variety of possible approaches to this, including repair of relevant gene function (for example, of a mutated gene associated with collagen), altering the composition of the ECM (possibly by stimulating collagen production) or modifying the chemistry of the ECM. It might also be possible to manipulate the collagen architecture of the ECM or other aspects of the structure of the environment. 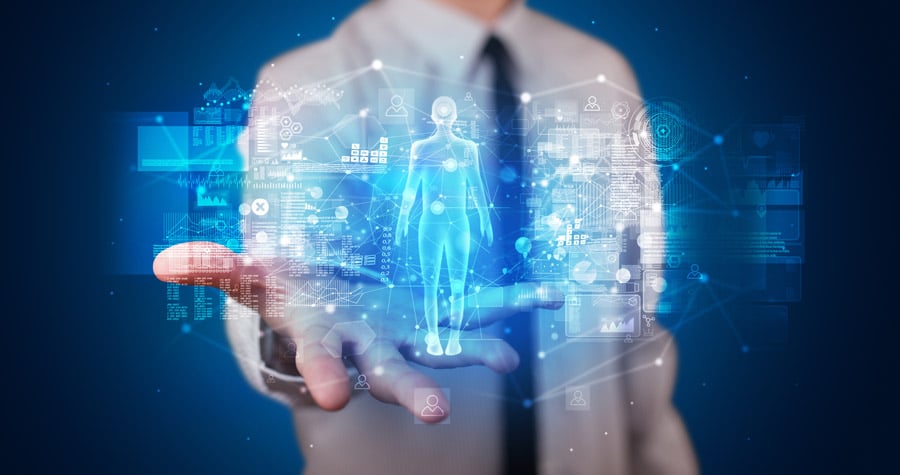 A likely benefit of intervention at this stage of cancer development – apart from halting the progression of the disease at a very early stage – is that there could be a far lower risk of associated morbidities (i.e. symptoms of the disease) when compared to side effects of drugs that are currently used. Professor Evans believes that this potential, coupled with the strong evidence gathered during his research, offers a robust argument for research efforts to focus on the ECM. Ideally, these future studies, which would encompass the fields of biochemistry, genetics and biophysics, would provide direct evidence for the important ideas advanced by the work of Professor Evans and his colleagues.

In terms of priorities, which aspect of the ECM should future research focus on?

<>The development of new study models is vital – those that enable manipulation of the physical environment of cells to investigate induction and reversal of cancerous behaviour, and those that monitor cell behaviours in the presence of defined forces. The characterisation of the stereochemical and biophysical details of protein structures in the environments of cancerous and healthy cells may reveal potential trigger markers. 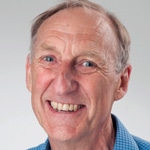 His first degree was in chemistry, then, in spite of the wonders inherent in molecules, the practical applications in health science attracted his attention. 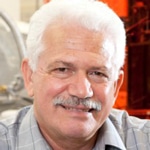 Is a nanotechnologist, his background is in electronic engineering and nanoscale devices. His research interest includes the influence of the nano-environment on the functioning of biological cells.

Is a gynaecological oncologist. He has provided care to women with gynaecological cancer in New Zealand for over 20 years and is an experienced researcher.

Professor John Evans studies the link between mechanical forces imparted on cells by their neighbours and cancer development.