Health & Medicine
Age-related macular degeneration (AMD) is one of the leading causes of vision loss worldwide. It goes without saying there is a need for early diagnosis of this devastating disease and to provide patients with effective treatment. Professor Christine Curcio from the University of Alabama at Birmingham has been working on exactly that. Professor Curcio and her team aim to reveal the key clinical details of the final stages of AMD, using a clinical imaging technique known as optical coherence tomography (OCT), in an effort to prevent irreversible vision loss.

Many people accept vision decline as a normal part of human ageing. While this is in part true, serious changes that lead to diseases such as age-related macular degeneration (AMD) can be prevented from regressing into the loss of visual function if caught in time.

AMD is a significant cause of visual morbidity worldwide. It is responsible for 8.7% of legal blindness globally and is the second largest cause of irreversible vision loss worldwide. While treatments exist for neovascular AMD, a late-stage complication, and prevention for progression to late-stage exists for some patients with drusen in both eyes, it’s not known how this preventative treatment works, and only some patients are eligible.

Professor Christine Curcio and her team aim to overcome these challenges by identifying and developing a clear timeline of AMD as the disease progresses, in an effort to highlight when and where clinical interventions are most effective and appropriate.

Understanding AMD
AMD is a retinal disorder, which results in changes to the structure of the macula—the part of the retina responsible for sharp central vision. Over time, light-sensitive retinal cells in the macula photoreceptor die as the patient ages; hence the name age-related macular degeneration to distinguish it from macular degenerations that occur early in life. The disease makes doing detailed work such as reading or driving difficult.

AMD falls into two categories: wet and dry. Wet type is characterised by the growth of blood vessels beneath the retina, which is treatable; however, it affects less than 15% of AMD patients. The most common form is dry AMD.

In the early stages of the disease, fatty deposits can be seen under the retina by imaging tools. These are often identified by the presence of yellow spots on the retina. These yellow deposits are known as drusen. Previous research conducted by Professor Curcio and many others demonstrated that the presence of drusen is a major risk factor for the disease progressing to late stages of AMD.

There has been tremendous success since 2006 for the treatment of wet AMD and its complications, that is, the growth of blood vessels that leak and swell the retina leading to visual disturbances. However, although treatment may improve vision, it does not stop the underlying disease from progressing. This is due to a limited understanding of exactly how the disease progresses. Professor Curcio and her team aim to uncover the mysteries behind AMD with the hope earlier detection and better treatment can be made available.

Optical coherence tomography (OCT) is an indispensable piece of equipment for many ophthalmologists and even some opticians. While OCT helps to diagnose many eye and other health problems, it is particularly important for AMD. As no treatment currently prevents further vision loss in patients with GA, identifying when the disease will progress to the late stages of dry AMD is vital. Using OCT to unveil how AMD progresses has been a significant part of the foundation of Professor Curcio’s work.

OCT is a non-invasive imaging tool that works in a similar way to an ultrasound, but instead of using soundwaves, it uses infrared light technology. It provides precise cross-sectional images of vital structures within the eye—including the layers of the retina, helping to detect and manage abnormalities. Because patients with wet AMD are treated every month, a vast number of OCT images of their eyes has accumulated. These include the eyes that still have only dry AMD. Precise alignment of images over time (eye tracking) allows the creation of movies showing cellular-level disease progression.

Professor Curcio and her team have contributed ground-breaking work in revealing the similarities between patterns observed within snapshot tissue-level microscopy studies (histology) to clinical OCT in patients diagnosed with dry AMD GA. Based on studies conducted by Professor Curcio, a significant correlation between the images produced by OCT and processes occuring as the disease progresses to GA was discovered. Professor Curcio’s work will help clinicians and other eye specialists know how OCT can be used better and images interpreted in order to see the vital but newly discovered details when examining patients suffering from AMD.

Unveiling geographic atrophy
Excitingly, Professor Curcio’s study demonstrated the clinical features associated with GA at the cellular level using OCT combined with other clinical imaging modalities. The study showed there were structural changes to the area of the eye showing GA, hyperreflective lines occurring from specific deposits within the eye, and changes to the drusen and the location of the drusen deposits. The external limiting membrane—a key structure in the retina signifying contacts between photoreceptors and supporting cells, was identified as appearing to descend. This structure walls off the atrophic area with dead and dying photoreceptors from the area with still-living photoreceptors. These studies provided important details in clinical images for identifying the point where intermediate AMD progresses into GA.

Histological images demonstrated the presence of cholesterol crystals, which were the reason for bright reflective lines identified in the clinical images. The drusen deposits were also linked to changes in pigmentation signifying migration and death of RPE and degeneration of overlying photoreceptors.

Professor Curcio’s research will allow clinicians to better identify the progression of the end stages of AMD.

The endpoint of AMD
Preventing AMD from advancing to GA requires new interventions to be developed that can either stop or delay its progression. However, before a new treatment can be rolled out to patients, it must first be tested and approved in clinical trials. Clinical endpoints are the events that are observed during a clinical trial in order to monitor the effect of treatment and to objectively measure if a treatment is working or not. However, approved endpoints currently used in scientific studies into AMD are often only observed after the disease has progressed into its late stages. This has led to poor health outcomes of clinical trials and the overall failure of dry AMD studies.

While these barriers hamper the development of drugs for the treatment of AMD, researchers specialised in the field of ophthalmology are currently working to overcome these issues. A team of expert ophthalmologists from around the world, the Classification of Atrophy Working Group, have begun developing novel endpoints for AMD. These are based on the results of OCT imaging and new tissue-level details of disease progression from Professor Curcio and her team.

Looking ahead
Recently, Avastin, originally licensed for colorectal cancer, has been found to show positive effects for the treatment of wet AMD alongside the use of OCT imaging. This brings hope for the future of AMD patients that OCT alongside a new treatment will eventually help prevent blindness caused by dry AMD.

RPE cells migrate off a very large druse, which then collapses to atrophy. Video available online.

Professor Curcio’s work will help fellow researchers appropriately examine the results of clinical trials based on AMD patients undergoing treatment and provide an opportunity for clinicians to intervene and improve patient outcomes. The work of her team may one day contribute to a reduction in the incidence of legal blindness caused by AMD across the globe.

Due to the effect of an ageing global population as particularly seen in developed countries, the number of people diagnosed with AMD is expected to increase. Professor Curcio’s research will allow clinicians to better identify the progression to the end stages of AMD, providing the opportunity for preventative measures to be put in place and effective treatment to be administered before irreversible damage to the tissues in the eye can occur, therefore, preventing blindness.

What recommendations do you have for future research as a result of your work?

<> I am excited by the work of the CAM group to define a progression sequence of AMD. The organised layers of make it possible to generate a detailed movie of the disease, and so we will know when to intervene. Other research from my lab has identified lipids originating from diet and released from RPE as an important component of drusen. So drusen-busting treatments can target lipids, and a good diet will be important for prevention. 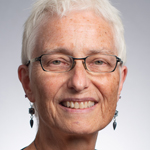