Health & Medicine
The long-ignored astrocyte is of more interest than ever in neuroscience. When the central nervous system is damaged, astrocytes undergo astrogliosis, morphing into reactive astrocytes to protect neurons from further damage. But, as it turns out, this process could be doing more harm than good by not allowing damaged neurons to mend themselves. Professor Lisette Leyton of the University of Chile is investigating the biochemistry behind this Faustian bargain, seeing whether molecules involved in this process like connexin43 or β3 integrin could provide a new therapeutic tool in managing neurodegenerative diseases.

If someone brings up the topic of neuroscience, or the nervous system, several cells or molecules might come to your mind. The scrawny neurons within the brain, connected to their neighbours in an unfathomably complex network. Or the neurotransmitters sent by neurons as signals, with famous faces like dopamine or serotonin. However, one cell you likely wouldn’t mention is the astrocyte.

The central nervous system’s forgotten cell
Astrocytes are a type of glial cell – a non-neuronal cell in the central nervous system (CNS) throughout the brain and spinal cord – that do not participate directly in electrical signalling but play a crucial and active role in the synapses. In contrast to the gangly neuron with its distinct dendrites and axon, astrocytes are centred around a nucleus with dendrites branching out of the cell from all directions, like tentacles on an octopus.

Despite their lack of fame, astrocytes are still incredibly important; they are the commonest cell type in the CNS, outnumbering their neuron partners. Astrocytes are essential for synaptic transmission within neurons, ‘nourishing’ them with regular doses of molecules such as ATP or glutamate, and also help to form the blood-brain barrier. Astrocytes are also the frontline defence, absorbing chemicals or molecules when they reach toxic levels, and enclosing the damaged area with lesions to prevent such molecules damaging neighbouring neurons.

Their repair role is perhaps most significant in the CNS. When the brain undergoes inflammation from conditions like stroke, the astrocytes transform themselves for their new job at the frontline of defence. The astrocytes change to reactive astrocytes through a process called astrogliosis.

This is the normal response of astrocytes in the event of any damage within the CNS, which respond to inflammation from an injury to immediately help protect neurons. But even this normal process presents problems by preventing axons from repairing, meaning neurons are less likely to survive. This is particularly problematic for neurodegenerative diseases defined by irreversible neuronal damage.

In a cruel twist of irony, astrocytes which try to protect the CNS, inadvertently damage its neurons. And do so through the very reactive astrocyte transformation meant to prevent further damage. It’s akin to a Faustian bargain, trading short-term protection for a long-term decline.

As research interest into astrocyte migration has grown, their involvement in neurodegenerative disease has been highlighted as a potential target for treatments. Experiments in mice have shown reactive astrocytes to appear before signs of cognitive and motor decline, acting as a precursor for neurodegenerative disorders.

But before we can prevent astrocytes from exacerbating diseases like Alzheimer’s or Amyotrophic Lateral Sclerosis (ALS), a question must be answered. How do astrocytes migrate towards damaged neurons? This question forms the basis of research conducted by Professor Lisette Leyton and her laboratory at the Faculty of Medicine, University of Chile.

Astrocyte migration
Astrocytes use protrusions, an extension of the astrocyte’s membrane, to move by using them in a ‘stick and peel’ process. The protrusion extends in the direction of the final location of damage, sticking the protrusions at the cell front like velcro, and peel away from the opposite end. As the protrusions from the back peel to stick front forward, the cell crawls over the neurons and the extracellular matrix. Importantly, this movement is only observed in reactive astrocytes.

This attachment is facilitated by receptor-ligand complexes. Without the receptor and ligand binding, no migration is possible. Reactive astrocytes express cell surface proteins that act as receptors, specifically αVβ3 integrin and syndecan-4 proteoglycan, which bind to the Thy-1 ligand protein on the neurons.

Thy-1, also known as CD90, is the lever for a migrating astrocyte. When Thy-1 binds to the receptors, it triggers a downstream signalling cascade within the astrocyte, meaning it sends a chemical message, which sends another chemical message, with the final message of using the astrocyte’s ‘stick and peel’ to migrate. This signalling cascade involves a plethora of chemicals and molecules that interact with each other in a variety of ways.

Controlling astrocyte migration with Connexin43?
For example, connexin43 (Cx43) hemi-channels are channels on the cell wall of astrocytes which are regulated by the release of ions from within and uptake from the outside of the cell, in this case calcium ions (Ca2+). Cx43 hemi-channels help to release molecules involved in signalling, like ATP, to activate P2X7 receptor – the next molecule in the signalling cascade resulting in Ca2+ entry.

Targeting β3 integrin could even be the basis for therapy in neurodegenerative diseases like Alzheimer’s disease.

These molecular events increase the level of Ca2+ in the astrocyte, which creates a feedback loop of opening more Cx43 hemi-channels, inviting in more Ca2+ to open more of the same hemi-channels. And it was the Cx43 hemi-channels which piqued the interest of Professor Leyton and her collaborators, who wondered if the increase of intracellular Ca2+ and opening of hemi-channels would trigger the transformation of astrocytes so that they would respond to Thy-1 even in the absence of a pro-inflammatory stimuli.

However, Ca2+ alone doesn’t trigger astrocyte migration. When a pro-inflammatory substitute was used to trigger the opening of the Cx43 hemi-channels and fill the cell with calcium, the astrocytes were only partially activated. The cells still needed the Thy-1 binding before they could pack their bags and migrate over neurons and matrix proteins. 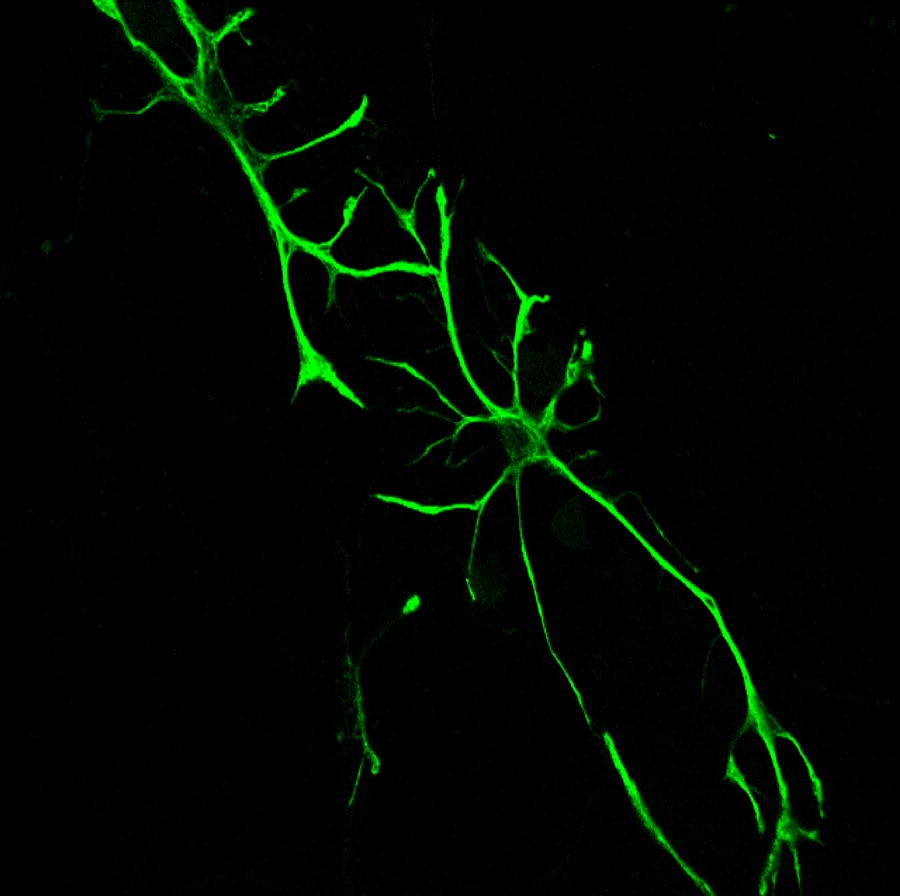 Controlling astrocyte migration with β3 integrin
As the Ca2+-induced Cx43 hemi-channel opening couldn’t control migration on its own, their attention shifted towards β3 integrin, a major membrane receptor involved in cell migration. As a molecule part of the αVβ3 integrin, and one which is produced in astrocytes during inflammation, it was an ideal candidate for preventing astrocyte reactivity and migration.

This discovery could be the key to controlling astrogliosis. By blocking β3 integrin and the pathways they use to trigger astrogliosis and migration, it could prevent the irreversible changes of reactive astrocytes. Targeting β3 integrin could even be the basis for therapy in neurodegenerative diseases like ALS or Alzheimer’s disease. And it’s clear that the long-neglected astrocyte has never been a more important area of research.

Why do astrocytes prevent neurons from repairing their own axons, thus not allowing them to repair themselves?

The interaction between Thy-1 and the β3 integrin is bidirectional, meaning it does not only have consequences for astrocytes but also for neurons. Integrin-ligated Thy-1 makes a neuron retract its axon and dendrites. Moreover, the interaction prevents neurons from extending new processes. Therefore, damaged neurons in an inflammatory environment, where β3 integrin appears on the surface of astrocytes, neither regrow their dendrites and axons nor create new ones.

Are you planning any future research into therapies for neurodegenerative diseases by blocking β3 Integrin?

We are using a preclinical model to test the effect of integrin silencing in a wounded brain. When a millimetric needle is introduced to the cortex of a mouse brain, the area surrounding the damaged zone has hypertrophic astrocytes that express glial fibrillar acidic protein (a marker of reactive astrocytes). These astrocytes also express increased levels of β3 integrin. Using this model, we are inserting a small interference RNA that targets the integrin message and silences its expression. The key point we are trying to resolve is how to target only astrocytes with this probe, since β3 integrin is a ubiquitous molecule and muting its expression in other brain cells might have undesired side effects. 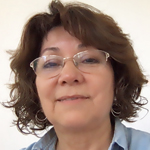 Lisette Leyton’s research focuses on understanding the cellular and molecular details that control the movement of mesenchymal cells, which are those that close wounds in the brain (astrocytes) and in the skin (fibroblasts).

Research colleagues and students that are co-authors of my research articles and specially Dr Andrew FG Quest, my research and life partner.