Health & Medicine
The inner workings of our ears have been well understood for some time, but there is still significant debate among researchers over how acoustic vibrations are converted into electrical brain signals. In his research, Dr Jim Hudspeth at The Rockefeller University sheds new light on the discussion, by studying the proteins which connect tiny vibrating hairs in the inner ear with electrically excitable cells. His work has answered long-standing questions regarding the stiffness of these spring-like proteins, and shows that mutations in the molecules can alter their mechanical properties.

No matter where we stand on the Earth’s surface, our surrounding environment will be a rich landscape of sound. Sound travels because vibrating air molecules induce vibrations in their neighbouring molecules in sustained chain reactions. Almost inevitably, our bodies have evolved to make full use of these intricate acoustic patterns, and they are now a fundamental part of the systems we use to communicate with each other. As Dr Hudspeth explains, the diverse array of frequencies and amplitudes represented by sound waves require some complex, intricate anatomy to capture. “When sound impinges upon the external ear, the associated mechanical signals travel across the tiny bones of the middle ear and into the coiled cochlea,” he says. “Waves of vibration then propagate along the cochlea and peak at positions determined by the frequencies present in the original sound.”

Unlike our other sensory organs, our ears do not directly translate stimuli into the electrical brain signals we perceive as sound. Before that happens, a further process takes place within the inner ear, driven by minuscule hairs named ‘stereocilia’. By interacting with the complex vibrations of the cochlea, stereocilia can ultimately induce signals in the brain.

“The cochlea’s vibrations are captured by sensory hair cells, the receptor cells of the inner ear,” Dr Hudspeth continues. “Each hair cell is surmounted by a hair bundle that comprises an upright cluster of up to a few hundred microscopic rods called stereocilia. When the hair bundle is vibrated, mechanosensitive channels open; the ensuing electrical current excites the hair cell and causes the release of synaptic transmitter. The action potentials that originate in the associated nerve fibres propagate into the brain and evoke the sensation of sound.” Anatomists have understood the role of these receptor cells for some time, but because the structures are so intricate and play such complex roles, there are still mysteries surrounding how they work.

Identifying the gating spring
One step in the translation from acoustic waves to brain signals which is still poorly understood involves the tiny structures which connect stereocilia with their corresponding mechanosensitive channels. As Dr Hudspeth describes, “earlier experiments had suggested that each channel is opened by a ‘gating spring’, an elastic element that conveys displacement of a hair bundle to the channel.”

When designing regular springs, engineers must consider a variety of factors they will encounter during usage, in order to determine how stiff the springs need to be. The suspension springs in a car, for example, would cause uncontrollable bouncing when driving over a bumpy road if they were too pliant, but would barely soften the ride if they were too stiff. In comparison, a gating spring would be useless if it were either too responsive to hair bundle vibrations or not responsive enough; each case would mean that our perception of sound wouldn’t correspond to the vibrations picked up by our ears.

“An appropriate stiffness of the gating spring would permit the discrimination of different sound amplitudes: if the spring were too stiff, however, then a faint sound would elicit the same response as a loud one, opening all of a cell’s channels,” explains Dr Hudspeth. “Although a structure named the ‘tip link’ – a fine protein filament connecting the top of each stereocilium to an adjacent one – might be the gating spring, its physical characteristics have remained controversial.”

The dispute surrounding this tip link hypothesis arises since studies using techniques including electron microscopy and crystallography have implied that the proteins are far stiffer than they would need to be to act as effective gating springs. In their research, Dr Hudspeth and his colleagues – especially postdoctoral researcher Dr Tobias Bartsch – aimed to uncover both the identity and mechanism of operation of the gating spring, by exploring the molecular-scale properties of tip links in detail for the first time.

An appropriate stiffness of the gating spring would permit the discrimination of different sound amplitudes.

Stimulating tip links
The first major challenge faced by Dr Hudspeth’s team was the inherent intricacy of tip links; since the structures are on the scale of single molecules, it would be incredibly difficult to probe them directly to determine their properties. The researchers solved the issue in a 2016 study, in which they engineered tethers from strands of DNA, which connected tip links in a bullfrog’s ear with highly magnetic beads. They could then exert mechanical forces on the tip links by subjecting the beads to strong magnetic fields.

This setup allowed Dr Hudspeth and colleagues to test exactly how differences in the mechanical forces experienced by the tip links translated to differences in electrical signals. The experiment confirmed for the first time that tension present in tip links is indeed responsible for opening mechanosensitive channels. With these experimental foundations in place, the researchers could then explore the properties of tip links in detail, allowing them to confirm whether or not tip links are the gating springs.

Tuneable stiffness
In his latest research, Dr Hudspeth makes use of a cutting-edge technique named laser tweezers, or optical traps, which can grab individual molecules, including tip link proteins, using highly focused laser beams. “Using a high-precision optical trap, we have demonstrated that the mechanical properties of a tip-link protein accord with those of a gating spring in vivo,” he describes. In the 2019 study, Dr Hudspeth’s team made a particularly important discovery about the role of the individual monomers which act as the building blocks of tip links.

We have demonstrated that the mechanical properties of a tip-link protein accord with those of a gating spring in vivo.

In fact, tip links are made up of two particular dimeric proteins, named protocadherin 15 and cadherin 23. After probing the individual monomers of the former proteins using optical traps, the researchers discovered the protein acts as a far softer spring than its molecular structure might suggest. They concluded that this occurs since the protein is ‘entropic’, meaning it tends to change from a state of order to a state of disorder over time. In this case, entropy changes occur because the tip link protein can bunch up into a complexly kinked pattern, which can be straightened in a rich variety of different ways. The mechanical properties of the tip link, including its stiffness, will therefore vary depending on how readily the applied force straightens out the protein’s disorder.

Furthermore, Dr Hudspeth and colleagues discovered that the tip link’s unfolding behaviours are influenced both by tension in the tip link and by the surrounding concentration of calcium ions. When each of these factors was varied, the proteins would unfold in different ways, meaning they had a direct influence on the mechanical properties, and therefore the overall stiffness of the tip link. Overall, this suggested that tip link is indeed likely to be a significant part of the gating spring, since its mechanical properties can be naturally tuned both by tension and by calcium ion concentration.

Advancing our understanding of hearing
The findings of Dr Hudspeth and his colleagues represent a significant advance in our understanding of the intricate workings of the inner ear. In particular, their work represents progress towards relating deafness with certain defects in tip link proteins – a widely anticipated insight among medical researchers. “We have additionally found that a deafness-associated mutation in the protein causes abnormalities in its unfolding, an instability that might account for the associated hearing loss,” Dr Hudspeth concludes. Overall, his discoveries bring researchers a step closer to bridging the gap in our knowledge of the role played by the gating spring in converting acoustic vibrations into our conscious perception of sound.

Our work on pulling tip-link proteins will likely take two directions. From the perspective of basic science, we hope to learn more about the complex physical process through which an entropically folded protein extends under tension and then relaxes again when the tension is relieved. And from the clinical viewpoint, we wish to understand why the 150 mutations that lead to improper folding of tip-link proteins – seemingly simple strings – lead to deterioration of hair cells and sometimes to deafness.

How do you think a tip-link-associated deafness mutation could be treated?

As with other problems caused by mutations, one possible therapy is the use of viral transfection to provide an affected individual with a normal copy of the gene in question. Therapy of this sort is becoming increasingly common: for the retina, as an example, viral transfection has been shown to arrest a specific type of blindness. 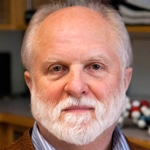 Jim Hudspeth conducted undergraduate studies at Harvard College and received PhD and MD degrees from Harvard’s Graduate School of Arts and Sciences and its Medical School. He is now F. M. Kirby Professor at The Rockefeller University and an Investigator of Howard Hughes Medical Institute.

Dr Hudspeth investigates the mechanics of how we hear, specifically the presence of a ‘gating spring’ that moderates the electrical impulses produced by sounds of differing volume.

Dr Hudspeth is an Investigator of Howard Hughes Medical Institute.