When exposed to gases and vapours of certain chemicals in their surrounding environments, chemiresistive materials can change their electrical resistance, which makes them incredibly useful as sensors for air pollution. Through her work, Dr Esther Hontañón, a researcher at the Spanish Council of Research (CSIC) in Madrid, explores how the latest advances in materials science and 3D printing technology can be used to enhance the sensitivity of these materials even further. Her team’s discoveries are now paving the way for cutting-edge networks of wireless pollution sensors, which could be applied in many real-world scenarios.

Techniques for monitoring air pollution are a key part of global efforts to improve human health in urban environments, while also minimising damage to natural ecosystems. There are many challenges involved in accurate sensing; not only can the gases and vapours contained in air pollution be spread out over wide areas, but their concentrations may also vary widely over time. Without the right approach, these factors make it incredibly difficult to build up a full picture of how pollution is affecting certain areas. To overcome these challenges, researchers are now investigating the use of cutting-edge wireless sensor networks.

Within these webs of interacting devices, individual sensors can detect the presence of particular pollutant molecules and process the data they gather before sending it to other devices for analysis via wireless signals. As Dr Hontañón explains, “wireless sensor networks allow for pervasive air quality monitoring by providing important benefits, such as real-time access to data, coverage of wide areas, continuous long-term monitoring, and system scalability.” To do this sustainably, however, sensors must be tiny, consume little power, and be easy and inexpensive to produce on industrial scale. As a result, their design presents a significant challenge in itself.

Altering electrical resistance
One promising route to achieving realistic and reliable networks is through the use of ‘chemiresistive’ sensors. These devices contain two electrodes positioned on top of an insulating substrate, separated by a small gap. This space is then bridged by a layer of material whose electrical resistance changes as chemicals in the surrounding environment adsorb to its surface. Therefore, by continually measuring the current passing between the two electrodes, the sensor can probe the types and concentrations of pollutants in the surrounding air.

Crucially, these devices require little power to run, and can operate using relatively small amounts of chemiresistive material – both important prerequisites for reliable sensor networks. “Chemiresistive gas sensors have gained increasing attention due to their higher potential for miniaturisation and integration, enabling the development of highly portable devices and wearables”, Dr Hontañón describes. To realise the full potential of these devices, Dr Hontañón and her colleagues are now investigating how the latest advances in materials science can be exploited to make chemiresistive materials respond even more readily to surrounding air pollution.

Sensors must be tiny, consume little power, and be easy and inexpensive to produce on industrial scale.

New materials for sensing layers
So far, chemiresistive sensor designs have largely relied on compounds called metal oxide semiconductors, coated onto substrates in thin films. However, researchers have increasingly realised that these films are limited in their sensitivity, as well as their selectivity to certain pollutants. Moreover, they operate typically at temperatures above 300°C, so it is necessary to heat the sensing layer by applying power in the order of tens of milliwatts. To improve their capabilities while reducing the size, manufacture costs and energy consumption of metal oxide-based sensors, Dr Hontañón and her team are designing more advanced chemiresistive materials, featuring deeply intricate nanoscale structures. 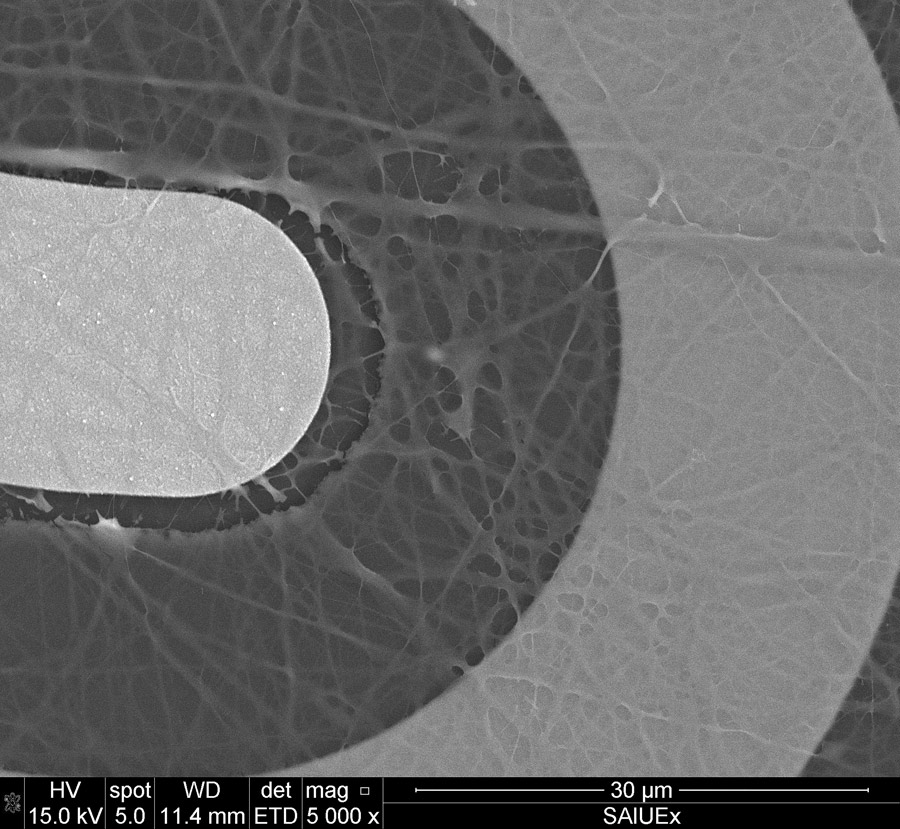 Currently, the team’s research is focused on fabricating materials with a wide range of different shapes – including nanoscale particles, wires, fibres, and ribbons. They are using a variety of materials to manufacture these structures – such as metal oxides and carbon-based compounds – and are investigating how the performance of chemiresistive materials can vary when deposited onto different substrates, including silicon, polymers, and paper. None of these studies would be achievable through conventional deposition techniques. Instead, Dr Hontañón and her colleagues look to the latest advances in 3D printing technology. “The latest fabrication technologies offer customisable devices, micron- and submicron-scale features, and integration of multiple materials onto a single substrate”, she explains. “Simplified processing steps, reduced material wastage, low fabrication costs and simple coating/patterning techniques make printing technologies very attractive for cost-effective sensor manufacturing.”

Advanced printing techniques
To deposit materials onto a substrate, 3D printers propel droplets of a material in liquid form through a fine nozzle, which then dry and solidify on a flat substrate – enabling 3D structures to be built up layer by layer. However, the most common ink-jet printing techniques currently available cannot be used to fabricate structures any smaller than a few tens of micrometres. Furthermore, ink jet is one of the slowest printing technologies due to the need of the print-head to scan the substrate. Instead, Dr Hontañón’s team explores the potential of electrohydrodynamic printing for the preparation of chemiresistive sensors. “Electrohydrodynamic printing is a form of ink-jet printing, where the droplets are pulled out from the nozzle by an external electric field, rather than being pushed out”, explains Dr Hontañón. These techniques allow for high-resolution patterning down to one micrometre by reducing the diameter of the nozzle, as well as for adjusting the surface area of the coating by varying the nozzle-to-substrate separation.

One electrohydrodynamic technique is called ‘electrospinning’ – where polymer solutions containing a precursor to the metal to be printed are drawn out of the nozzle in charged threads to form fibres that deposit from the gas onto a substrate and form a tangle web. The fibrous layer is then heated in order to remove the polymer and oxidise the metal, so that nanofibres of the desired metal oxide are finally obtained. The resulting material both has a high surface area and is highly porous to gas – meaning its change in electrical resistance is extremely sensitive to the gas passing through it.

Electrospun nanofibres
In two recent studies, Dr Hontañón and her colleagues used the electrospinning technique to produce nanofibres of the metal oxide semiconductor, tin oxide (SnO2 NF). After depositing the tangled fibres on top of silicon substrates containing two isolated electrodes, the researchers used them to detect low levels of ozone and nitrogen dioxide in the surrounding air – both common air pollutants. Their initial experiments revealed that this particular material was more sensitive to ozone than nitrogen dioxide – and was also most sensitive to each chemical at certain temperatures: 200°C for nitrogen dioxide, and 350°C for ozone. In each case, the current passing through the nanofibres was measurably altered by pollutant concentrations as low as 50 parts per billion.

After their initial experiments, Dr Hontañón’s team loaded their tin oxide nanofibres with reduced graphene oxide. This material features 2D sheets of carbon atoms, where oxygen-containing groups have been attached and then partially removed by either chemical or thermal treatment, giving them advanced electrical properties. As the researchers discovered, their altered material was not only more sensitive than pure tin oxide nanofibres to the pollutant gases, but they had also reduced the temperatures at which it was most sensitive to both types of pollutant by some 150°C. Furthermore, gas could be desorbed almost instantaneously by irradiating the nanofibres with ultraviolet light. This allowed it to operate at temperatures lower than 100°C, reducing the energy consumption of the sensor and making it far more practical for real-world monitoring scenarios.

This success now opens up new opportunities for electrohydrodynamic printing techniques, namely electrospinning and electrospraying, in the production of low-cost, low-power sensors.

Electrosprayed films
In their latest study, Dr Hontañón’s team used an alternative technique to deposit chemiresistive materials, named ‘electrospraying’. Through this approach, liquids containing flakes of graphene were instead dispersed from a nozzle in fine aerosol sprays, whose tiny, charged droplets were then guided by electric fields. “Here, we applied the electrospray technique to the preparation of graphene-based gas sensors”, Dr Hontañón describes. “We then assessed the detection performance of the resulting sensors towards two air pollutants, nitrogen dioxide and ozone.”

The researchers prepared nanoscale films of two distinct graphene materials, reduced graphene oxide and graphene nanoplatelets (GnP), on polymer substrates by first dispersing them within isopropyl alcohol, which can readily produce tiny and rapidly evaporating aerosol droplets when sprayed. Through their experiments, they then investigated how the surface area and deposition pattern of the flakes could be varied, depending on factors including the substrate–nozzle distance, liquid flow rate, and applied voltage. By precisely controlling the properties of their films in this way, Dr Hontañón and colleagues found that their graphene sensors could become highly sensitive, picking up 50 parts per billion of nitrogen dioxide and ozone. Moreover, both gases desorbed instantaneously from graphene films when exposed to ultraviolet light. This makes graphene a suitable material for gas sensing at room temperature, since it doesn’t consume energy. “This success now opens up new opportunities for electrohydrodynamic printing techniques, namely electrospinning and electrospraying, in the production of low-cost, low-power sensors.”

Promising routes to sensor networks
Electrospinning and electrospraying are based on identical principles and use the same equipment. The main difference between them lies in the properties, namely surface tension, viscosity and conductivity of the liquid to be atomised: solutions or colloidal dispersions. They lead to different atomisation modes, in the form of filaments or droplets, in the gas phase which results in distinct nanostructured layers when deposited on a substrate, after eliminating the liquid.

The team’s experiments with both the electrospinning and electrospray methods have now paved the way for future studies of how chemiresistive sensors can be made more stable in real-world environments, through either heating or ultraviolet irradiation. Through this work, Dr Hontañón and her colleagues will explore how the sensors can be made to accurately detect low levels of many different types of pollutant, while also operating over a wide range of outdoor conditions, namely atmospheric temperature and humidity.

If these designs are achieved, and can be made widely available through industrial-scale manufacturing processes, they could provide groups including city governments, transport authorities, and conservation organisations with easy access to cutting-edge wireless sensor networks. With such a quick, easy, and inexpensive way to monitor air pollution, these groups will be able to accurately identify areas where pollution is most harmful to human health and damaging to natural ecosystems. In turn, this new generation of wireless sensor networks could help us to reduce levels of unavoidable pollution worldwide, while informing new measures to limit the extent of its impact.

Are there any particular areas where electrospinning would be more suitable than electrospraying for producing gas sensors, or vice versa?

<>Electrospinning is aimed at obtaining one-dimensional nanomaterials, such as nanofibers or nanoribbons, of conductive polymers or semiconducting metal oxides, to build up highly porous web-like layers. Electrospraying is aimed at finely dispersing a sensing material or its precursors, mainly metal- or carbon-based compounds, to build up nanoparticulate ultra-thin films. 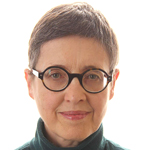 With a PhD in Physics, Esther Hontañón’s past research focused on the measurement of the size distribution of airborne nanoparticles, the mass production of metal nanoparticles by means of electrical discharges in gases, and antibacterial finishing of fabrics by coating of metal nanoparticles. She has been a member of the Group on Nanosensors and Smart Systems of CSIC since 2016.

The Interreg V Sudoe Programme of the EU is acknowledged for funding this research (NanoSen-AQM, SOE2/P1/E569).