Health & Medicine
The pancreas is an important organ that regulates food digestion and blood sugar levels. Cancers commonly arise in the pancreas, leading to death for over 50,000 patients per year in the U.S. alone. This is due to a lack of effective therapies and a low survival rate for this disease since symptoms arise only in the late stages of disease. Dr Leandro Martins de Freitas at the Federal University of Bahia developed a computing method based on artificial intelligence that can predict the risk for pancreatic cancer before symptoms appear. His new method stands to improve treatment, giving hope for patients.

The pancreas is one of the most complex organs in our body. This 12-15-centimetre-long organ located horizontally across the abdomen, functions as a gland. This means that it synthesises substances, such as enzymes and hormones, for release within the blood circulation (endocrine activity) or within cavities inside the body (exocrine activity). The pancreas of a healthy adult is a busy organ, synthesising and secreting approximately 1 litre of substances per day.

Busy, busy pancreas
As part of its exocrine activity, the pancreas makes enzymes and digestive juices that it secretes into the small intestine (duodenum). These secretions mix with and continue to break down partially digested food that enters the small intestine through the stomach. Examples of secreted substances include trypsin and chymotrypsin enzymes to digest proteins, amylase to dissociate carbohydrates, and lipase, to break down lipids. Digestive juices also contain bicarbonate, a substance that neutralises acid entering the small intestine through the stomach.

Pancreas interrupted
Pancreatitis is characterised by long-term gradual inflammation in the pancreas (redness and swelling caused by accumulation of white blood cells). It can lead to irreversible damage to the structure and function of the pancreas, which is associated with abdominal pain, tenderness, and swelling, nausea and vomiting, weight loss, diarrhoea, fever, and muscle aches.

Cancer can also develop in the pancreas when instead of becoming damaged, pancreatic cells divide uncontrollably to form a tumour. This can cause upper abdominal pain as the tumour pushes upon nerves, as well as jaundice – a yellow appearance of the skin and eyes as the cancer interferes with the bile causing it to generate the yellow-orange pigment bilirubin. Pancreatic cancer can also cause loss of appetite, nausea, and vomiting, significant weight loss and weakness, and pale or grey stool formation.

Treatment for pancreatic cancer involves surgery to remove the tumour, chemotherapy, radiation, and administration medication to reduce pain. Unfortunately, pancreatic cancer is a “silent disease”, meaning that symptoms most often appear when the cancer has already progressed to advanced stages. At that point, it is too late to carry out a successful treatment. The likely outcome of pancreatic cancer, therefore, tends to be very poor. Only 5 out of 100 patients with pancreatic cancer survive longer than 5 years after their diagnosis. 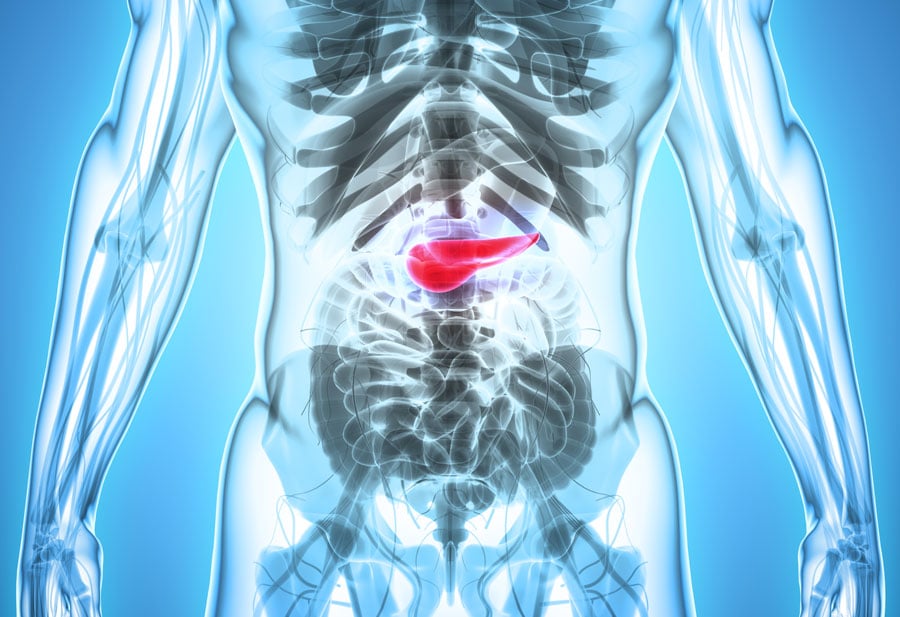 In the United States, pancreatic cancer ranks as the 4th most common cancer for men and 5th for women. Over 50,000 new cases are diagnosed each year, representing approximately 3% of all cancers. Tumours that affect the exocrine functions of the pancreas, such as adenocarcinomas, are the most common type of pancreatic cancer. Adenocarcinomas are also particularly “silent” and aggressive tumours.

Symptoms of pancreatic cancer often appear when it is too late for therapy.

Early detection of cancer
For the outcome of pancreatic cancer to improve, we need to be able to detect it at its early stages. Imaging techniques, such as magnetic resonance imaging (MRI) and computed tomography (CT) scans, may accurately diagnose the cancer, but are expensive and uncomfortable for patients. For years, scientists have tried to achieve easy, early, accurate, and cheap diagnosis by studying the levels of all genes (transcriptome) and proteins (proteome) that are present in our bodies when cancer appears. This type of study is referred to as “biomarker” analysis. It offers the possibility of improving the detection of cancer, and therefore treat it more effectively. One biomarker that has been used in the clinic is CA 19-9, a sugar-bound molecule whose level in the blood increases in pancreatic cancer patients. However, its levels often do not rise early enough to signal an alarm for doctors and patients.

Dr Leandro Martins de Freitas at the Federal University of Bahia (UFBA), Brazil, has recently published a new study that identified five new biomarkers for pancreatic adenocarcinoma. To achieve this goal, Dr Freitas and his team harnessed the power of publicly available information (i.e., they performed a “meta-analysis) regarding the levels of genes and proteins present in patients with adenocarcinoma. Findings were recently published in BMC Cancer.

A step ahead: artificial intelligence predicts likelihood of pancreatic cancer.

They acquired data previously published in 10 independent scientific studies and used it to compare the gene levels (also known as gene expression levels) in 463 adenocarcinoma samples and 187 normal samples. They found that the expression levels of 40 genes were different between the two groups; 39 genes had higher levels in adenocarcinoma patients, and one had higher levels in normal patients. They believe that these genes are important for the process of cancer formation. Many of the genes present at higher levels in adenocarcinoma were part of the cytoskeleton, a structure that gives cells shape and support, and facilitates movement of molecules inside cells. When studying the proteins products of these genes, Dr Freitas’s team found that 14 were also present at higher levels in pancreatic tumour samples.

Of the 14 proteins, the team selected five with the largest differences in levels between carcinoma and normal samples. The selected set of proteins included KRT19, a protein known to exist at high levels in patients with large tumour size and metastasis. The other four proteins were AHNAK2, LAMB3, LAMC2, and S100P. They used these five proteins, or biomarkers, to “train” an artificial neural network (ANN). This is a computing system based on artificial intelligence that can “learn” to classify samples into different groups after receiving “training” from a set of examples from each group. This “machine learning” analysis was used to categorise a new set of carcinoma and normal samples into healthy or not healthy. After testing 90 different iterations, the team were able to build an ANN that accurately predicted the risk for pancreatic cancer in each sample. 87 out of 100 actual adenocarcinoma samples were correctly identified.

Notably, 13 samples were incorrectly identified, suggesting that there is room for improvement for this ANN. Integrating additional genetic parameters (e.g., mutations in genes) and other contributing factors (e.g., diabetes or other pre-existing disease) could help improve sample classification by artificial intelligence methods.

This is the first time that gene levels have been combined with artificial intelligence to create a model that diagnoses pancreatic cancer. The Brazilian team have made their software publicly available so that it can be used to improve diagnosis and survival in patients with pancreatic adenocarcinoma. Identification of reliable biomarkers could also allow development of better drugs to treat this devastating disease. Therefore, using new technologies, Dr Freitas and his team have given new hope to patients with pancreatic cancer. 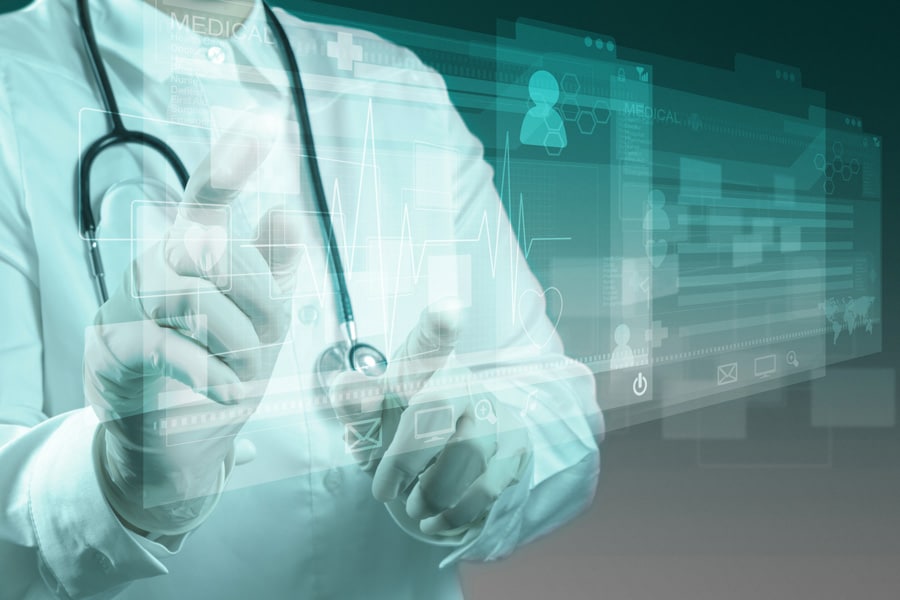 Do you anticipate ANN neural networks will ever become 100% accurate at predicting the likelihood of pancreatic cancer?

<> New pancreatic cancer biomarkers should be incorporated into a new version to improve the predictions made by PDAC-ANN. Although this could increase the performance, 100% accuracy is unlikely. A 100% accurate tool means that during the training phase, the key features and all possible variations were presented. As a consequence, nothing different from the training set is seen in new samples. If this is not the case, training a tool and reaching high values of performance means a tool with overfitting; this tool is excellent in the training set but has low accuracy in samples never seen before. Cancer development is a complex molecular disease that occurs after mutations and modifications in gene expression, and we are still finding all essential features and learning all variations. 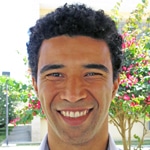 Leandro Martins de Freitas completed his B.Sc. in Biological Science in 2004, and his M.Sc in Genetics in 2007. He completed his Ph.D. in Bioinformatics at Federal University of Minas Gerais (UFMG) in 2011. Since 2009, Dr de Freitas has taught Genetics, Bioinformatics and Evolution at Federal University of Bahia (UFBA). He has professional experience in sequence and expression analysis, epitope and immunological prediction.

Leandro Martins de Freitas explores the use of genetics and gene expression to assist cancer diagnosis. 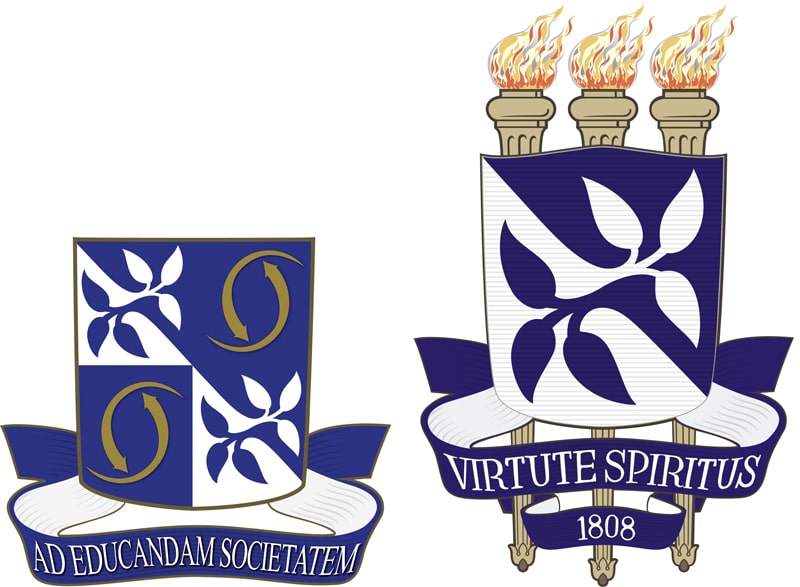