Physical Sciences
Cellulose is a renewable polymer that can be used to produce biofuels and other bio-based materials. However, the potential of cellulose to displace petroleum-derived products had been limited by incomplete knowledge of its nanoscale characteristics. Recent research by
Dr Peter Ciesielski and Dr Michael Crowley, both from the National Renewable Energy Laboratory, has advanced our understanding of nanoscale defects that play an essential role in the material’s mechanical properties and degradation process. Using atomic force microscopy, molecular dynamics, and quantum mechanics, they elucidated a fundamental structure / property relationship that may hold the key to renewable bioproducts from cellulose.


Cellulose is one of the most important and abundant renewable materials. It is the primary component of natural products such as paper, lumber, and cotton, but other potential products like renewable fuels and nanomaterials have yet to be fully exploited. Cellulose, which is the main structural material in plant cell walls, is a natural polymer consisting of repetitive sugar units, knitted together in a pattern that prevents deconstruction. For that reason, cellulose cannot be digested by humans, and furthermore, based on its resilient structure, it can be repurposed for a variety of material applications.

However, due to its sugary structure, cellulose has the potential to be used for biofuel production, which requires the depolymerisation and isolation of smaller sugar units that could then be transformed into fuel. This potential is currently untapped, despite rigorous research over the past decades on physical, chemical, and biological methods that could be used to break down cellulose structure. What has so far been achieved is the identification of various pre-treatments and methods that can be partially efficient towards the production of biofuels from such biomaterials. However, a deep understanding of the interplay between mechanical processing, cellulose architecture, and chemical breakdown is still in demand.

Before diving further into recent advancements regarding the specifics of cellulose deconstruction, we will give a brief overview of why renewable materials and biofuels have received and continue to receive so much attention.

The need for renewable materials and biofuels
Over the past few decades, there has been a turn towards green chemistry and sustainability in an effort to move away from fossil fuels, chemicals and processes that have been used for years with devastating results to the environment. The finite amount of petroleum-based fuels, their effect on the environment, and the ever-growing energy needs of the global population have raised great concerns about our ability to rely on such energy sources. Towards a greener direction, renewable energy sources emerged, such as harvesting light from the sun, the power of wind and water flow, and the utility of renewable materials, such as biomass, that can be replenished. Renewable biofuels are already produced commercially, for example the production of bioethanol from corn starch.

Dr Ciesielski and Dr Crowley cracked the puzzle on the importance of defects on the cellulose fibres.

Cellulose is available in massive quantities from low-value biomass like agricultural waste and forest thinnings. However, unlike starch, the sugars in cellulose are packed tightly in strong nanofibers which hinders our ability to break it down and ‘take the goods’ in sustainable ways. Promising cellulose conversion technologies employ biological methods based on enzymes, nature’s little helpers, in addition to physical and chemical methods. Enzymes that degrade cellulose (called cellulases), however, cannot degrade biomass to the degree or speed that would make such a process industrially viable. Pre-treatments that improve conversion involve considerable energy consumption or require harsh chemicals which makes the process too expensive for commercial deployment. Hence, ongoing research is trying to overcome the hurdles and assist the enzymatic conversion of biomass to valuable products.

Kinky cellulose: why defects are good
Recent advancements towards the improvement of cellulose degradation through a better understanding of its structural characteristics revealed that cellulases can break down cellulose easier if its structure has some defects, acting as handles for enzymes to attack an otherwise impenetrable structure. To understand this concept better, think of how shampoo commercials present hair and its cuticles: the idea is that the shampoo will make the hair sleek again by sticking the cuticles back to the main body, so that hair is not prone to breakage. On the cellulose occasion, the idea is the opposite. We want to introduce cuticles (defects) on the hair (cellulose fibre), so that it breaks more easily.

The knowledge of defects having a beneficial role to cellulose degradation is not new, but the introduction of defects on the cellulose structure through mechanical means to assist degradation further by incorporating more points for enzyme initiation was first evidenced by Dr Peter Ciesielski and Dr Michael Crowley at the National Renewable Energy Laboratory (NREL) in Colorado, US. Together, they investigated the nanostructure of cellulose through both experiments and simulations, demonstrating the direct relationship between mechanical stress, formation of kinks (defects), and enzymatic degradation. In subsequent research, they explored how targeted mechanical introduction of defects on cellulose fibres improves enzymatic degradation in biomass conversion processes.

Understanding and modelling of cellulose defects
Dr Ciesielski and Dr Crowley combined forces (and their expertise) and created a fascinating narrative around the process of cellulose deconstruction for the production of biofuels, biochemicals and biomaterials. Their efforts were spread out over three publications, with the most recent one bringing the pieces together. Initially, they used microscopy and atomic modelling in order to replicate the nanostructure of cellulose in native and pre-treated form and help gain an understanding of the effect of pre-treatment on the structure of the fibres. Having gained insight on the structural changes and identified the presence of kinks after the pre-treatment, they focused on the enzymatic degradation of cellulose, gaining an understanding of the breakdown mechanism. The same publication also demonstrated that valuable cellulose nanomaterials could be produced as by-products of the enzymatic treatment. Then, in their most recent publication on the topic, Dr Ciesielski and Dr Crowley combined their newly acquired knowledge and cracked the puzzle on the importance of defects on the cellulose fibres for their enzymatic deconstruction. Using a combination of atomic force microscopy, molecular dynamics, and quantum mechanics calculations, they simultaneously caused, observed, and simulated the introduction of defects, before checking the efficiency of these defects on the facilitation of enzymatic degradation using cellulase enzymes.

Looking up-close and personal into cellulose
In their most recent work, Dr Ciesielski and Dr Crowley revealed that the presence of kink defects and breakages in the polymer chains that accompanied them are fundamental for the success of the enzymatic process. Through molecular dynamics, they were able to create representative models interpreting results obtained from atomic force microscopy experiments on the mechanical introduction of defects, and through quantum mechanics, they were able to analyse how the enzymes use these defects as ‘stepping stones’ to initiate degradation. Their detailed work, combining an experimental and computational approach, created a solid base on understanding more about cellulose degradation and how it is affected by the architecture of the molecule and the pre-treatment.

Their detailed work, combining an experimental and computational approach, creates a solid base on understanding cellulose degradation.

Through a very elaborate explanation of how the cellulose fibre gets bent under the atomic force microscopy pointer, Dr Ciesielski and Dr Crowley provide valuable insight on the breaking of cellulose bonds, connecting data collected experimentally and through simulations. They elaborated on the disruption of the generally crystalline cellulose structure (ordered structure, with sugar molecules oriented in a repeating three-dimensional arrangement) and the introduction of “defects”, forming amorphous regions, where molecules are no longer placed in an ordered fashion and polymer bonds begin to break. It should be mentioned that this structural change of cellulose from crystalline to amorphous was caused by “mechanical poking”, through the atomic force microscopy pointer, contrary to chemical or thermal pre-treatment usually employed for disrupting the sturdy structure of cellulose.

The newly created amorphous regions, different from the straight, “sleek” structure of the cellulose fibre, provide the necessary molecular features cellulases, the enzymes responsible for cellulose degradation, to initiate the breakdown of this tough biomaterial. The knowledge developed by Dr Ciesielski and Dr Crowley on the structure of cellulose, the mechanism of enzymatic degradation, the presence of defects within the molecule and their introduction through mechanical manipulation, as well as the combination of this understanding towards the improvement of cellulose degradation open new avenues of research and exploration to improve the efficiency biomass conversion processes.

<> Biomass deconstruction methods that involve simultaneous mechanical and enzymatic treatments are synergistic – they are more effective together than either method is alone. This is not surprising, considering how ruminant animals combine chewing with biochemical deconstruction, but our study revealed why this is so effective: cellulase enzymes are programmed to naturally exploit mechanically induced defects at the molecular level.

Cellulose nanodefects: The key to biofuels and biomaterials of the future was last modified: November 9th, 2020 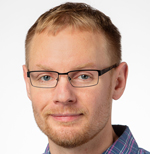 Dr Peter Ciesielski is a Principal Scientist in the Biosciences Center at the National Renewable Energy Laboratory (NREL) in Colorado, US. He has an interdisciplinary background and training and holds degrees in Chemical and Biological Engineering and Materials Science. Peter’s research encompasses many aspects of bioenergy and biobased materials, including biohybrid systems, catalysis, nanobiomaterials, and production of fuels and chemicals form biomass. He specialises in integrating experimental methods, particularly advanced imaging, with multiscale modelling to design, understand, and optimise processes that are central to bioenergy applications. 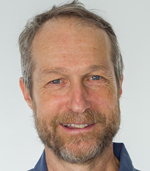 Dr Michael Crowley has been active in theoretical chemistry and modelling for over 30 years and is presently the Center Director of the Biosciences Center at the National Renewable Energy Laboratory. Mike is both a CHARMM and Amber molecular dynamics software specialist for biological macromolecular simulation and has contributed significant advances to highly parallel, high-performance scientific software for use on supercomputers. His current research is in plant biomass, specifically the cell wall structure and mechanical and chemical properties as they pertain to conversion of biomass to bioproducts and renewable fuels.

Dr Ciesielski and Dr Crowley study the macromolecular features of cellulose to optimise its use for natural material applications and production of renewable fuels.

Basic Energy Sciences Office of the U.S. Department of Energy.

Ciesielski, P. and Crowley, M. (2020). Cellulose nanodefects: The key to biofuels and biomaterials of the future. Research OUTREACH, 118. Available at: https://researchoutreach.org/articles/cellulose-nanodefects-key-biofuels-biomaterials-future/ (Accessed YYYY/MM/DD)