Health & Medicine
Traumatic brain injury (TBI) is one of the leading causes of disability and death around the world. To compound this problem, many patients go on to develop anxiety and with little known about the pathophysiology behind this complication, long-lasting and effective treatments are lacking. Using an animal model known as the controlled cortical impact (CCI) model, Dr Ann Marini and her research team at the Uniformed Services University, Maryland, have uncovered a fatty acid molecule which has the potential to be revolutionary for the treatment of post-TBI injury.

Mild TBI (mTBI) represents the majority type of brain injury and is often characterised by unconsciousness and/or alteration in mental state such as confusion for no more than 30 min, memory loss of events immediately prior to or after the injury that doesn’t last more than 24 hours, a focal deficit that may be short- or long-lasting, and a high score on the Glasgow Coma Scale test. While mTBI is usually benign and patients make full recovery, it has a risk of short-term and long-term consequences. Compared to individuals with injuries to other parts of the body, researchers have identified that some diagnosed with mTBI go on to have lasting cognitive deficits, mood and other neuropsychiatric disorders. Studies show that the two most common neuropsychiatric disorders are depression and anxiety. Because structural and functional brain changes that occur after TBI affect one’s ability to work, be socially engaged and live independently in society, more efficacious and targeted therapies are required to improve the overall health, emotional stability and functional state of individuals. Finding novel therapies to treat and/or prevent the development of the cognitive and neuropsychiatric disorders of TBI are vital; this is the ultimate research goal of Dr Ann Marini and her team. Alpha-linolenic acid has been identified as a potential treatment of mTBI by preventing alterations to the brain caused by injury.

Behind mild traumatic brain injury
Abnormalities in the brain can affect normal brain functioning, structure and biochemical levels. Mild and moderate TBI is often localised around the temporal lobe region, including the hippocampus and amygdala, complex brain structures, embedded deep in the temporal lobe. These structures are concerned with learning and memory, and emotional memory, respectively, and are vulnerable to the effects of TBI. This is demonstrated by the characteristic memory loss and neuropsychiatric disorders that often follow TBI. 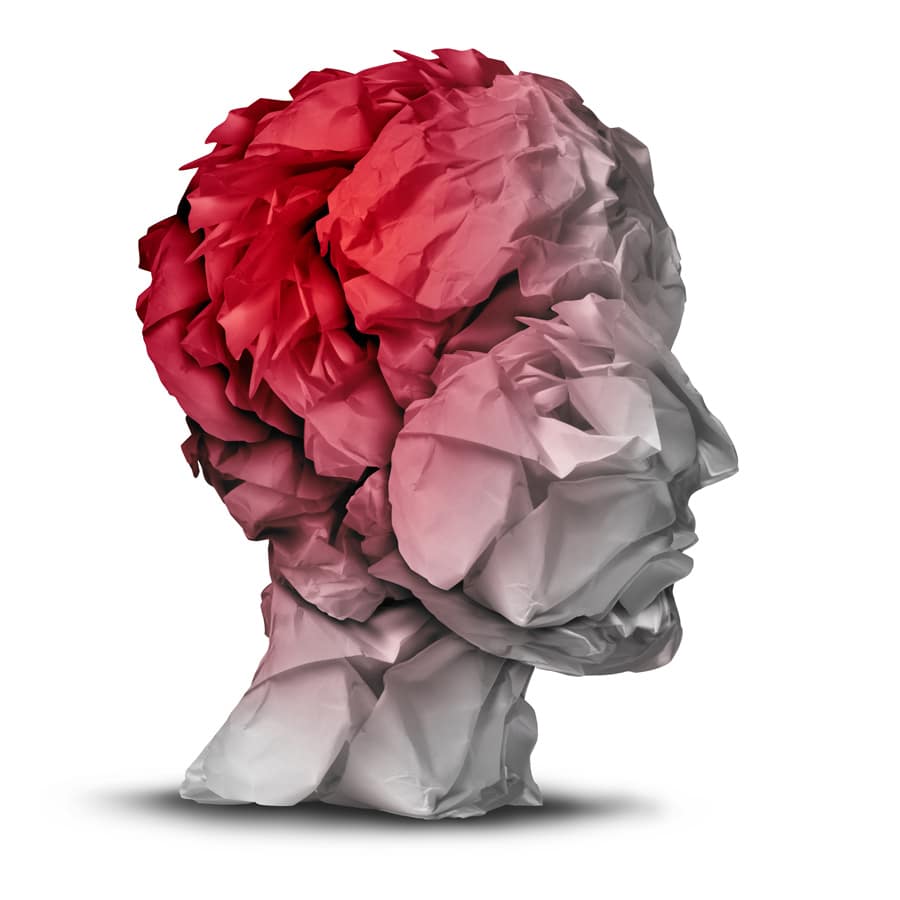 Understanding the cellular mechanisms behind memory loss and other characteristic symptoms of TBI is important as they may present novel approaches to treatment. The human brain passes signals at a relatively constant pace through neurons and synapses, or in response to an imposed activity. However, the homeostatic nature of the brain can be disturbed by damage. One biochemical change that occurs following mTBI is elevated excitability of neurons within certain regions of the brain, specifically the hippocampus. The memory loss and increased excitability of neurons has been suggested to be a result of the reduction in action of the inhibitory neurotransmitter, GABA (gamma-aminobutyric acid).

Dr Marini and her team identified that deficits in GABAergic systems resulted from significant loss of GABAergic interneurons and reduced surface expression of GABAA receptors. These effects reduce the inhibitory effects of GABA, and therefore increases the likelihood that neurons will fire an action potential. The team also identified that following mTBI, there is a significant decrease in N-methyl-D-aspartate (NMDA) receptor function. This has also been found to be an important contributor to the memory impairment. Interestingly, the significant loss of GABAergic inhibitory neurons observed during the first week after mTBI in the hippocampus completely recovered by day 30. This surprising finding shows the extraordinary ability of this brain region to restore homeostasis. The mechanisms underlying these unexpected findings are currently unknown.

Alpha-linolenic acid is identified as a potential treatment of mTBI, preventing alterations to the brain caused by injury…

microRNA and the brain
Although it is well established that changes to the structure and function of the brain are often altered by changes in normal gene expression, the underlying molecular mechanisms responsible for this damage are poorly understood. MicroRNAs (miRNA) are part of the non-coding sequence of DNA that regulate post-translational gene expression. Dr Marini identified that TBI can change the expression of miRNA in the hippocampus and therefore regulate gene expressions, as a result of brain injury.

Following brain injury, the team showed that miRNA did not uniformly increase or decrease, suggesting that miRNA does not have a passive role following injury, rather an active approach to cope with injury.

The researchers demonstrated that gene expression through miRNA plays an integral role in the compensation and repair of brain injury and different miRNAs are expressed at different times following injury with varying levels. This research highlights the potential of triggering additional mechanisms that may contribute to long-term cognitive dysfunction after mTBI. Targeting this cellular pathway may lead to novel therapies to help restore cognitive function.

TBI-induced anxiety
Anxiety can become a debilitating neuropsychiatric disorder after TBI. Anxiety disorder is the second most common diagnosed condition caused by mTBI. It’s estimated that 3 in 10 people who sustain a mTBI go on to develop TBI-induced anxiety (PTSD is now listed under a separate heading in the Diagnostic and Statistical Manual of Mental Disorders (DSM) V and no longer under the rubric of anxiety disorders).

This can be particularly problematic for individuals within the military because they are already vulnerable to an increased risk of anxiety after mTBI. Furthermore, TBI-induced anxiety can be difficult to treat which adds an additional layer of complication. Finding an important therapeutic target is needed to prevent or remedy TBI-induced anxiety.

While several models exist for the study of brain injury in animals (including weight drop injury, fluid percussion injury and blast-induced injury), controlled compact injury is preferable due to several factors including its reproducibility and control. First developed over 30 years ago, it is now a widely used and a highly regarded model of brain trauma.

While the part of the brain affected by TBI varies from patient to patient, mild and moderate TBI often occur within the region of the temporal lobe and the basolateral amygdala (BLA). It has been suggested due to the proximity of the amygdala to bony protrusion, when the brain is assaulted with physical impact, the amygdala can be easily injured as the brain ricochets inside the skull. The BLA is responsible for processing emotion, cognition and regulating behaviour.

Similarly, the BLA, which lies in front of the hippocampus, has also been shown to have similar problems. Utilising an animal model of mTBI, Dr Marini’s team demonstrated the development of anxiety-like behaviour (Fig 1A [compare middle tracing to sham tracing on left] and Fig 1B, grey bar and Fig 1B, grey bar). In the absence of α-linolenic acid, mTBI-induced animals avoided the centre, an area considered to be a ‘danger’ zone where the risk of being detected by a predator is high. This was caused by reduced GABAergic function and a significant loss of GABAergic interneurons in the BLA after injury (Fig 2B, upper panel and Fig 2C, red bar).

Alpha-linolenic acid
Alpha-linolenic acid is a polyunsaturated omega-3 fatty acid found in vegetable oils, seeds, nuts, amongst other food products. Not only is α-linolenic acid a natural substance that supplements the diet, Dr Marini’s team has shown that it also has the potential to prevent long-term neurological problems.

…TBI can change the expression of miRNA in the hippocampus and therefore regulate gene expression.

Their studies demonstrate that administration of α-linolenic acid (ALA) after mTBI completely prevents the development of anxiety-like behaviour (Fig 1A, right tracing and Fig 1C, black bar) as indicated by the increased exploration of the centre by the mTBI-induced animals. α-Linolenic acid prevented the significant loss of GABAergic inhibitory neurons (Fig 2B, lower panel; Fig 2C, black bar) and prevents the hyperexcitability in the BLA (not shown). The significant loss of GABAergic interneurons and attendant hyperexcitability appear to mediate the anxiety-like behaviour in the animal model, whereas administration of ALA restores the balance between excitation and inhibition. These findings are critically important because: 1. they underscore the fragility and vulnerability of GABAergic inhibitory neurons in the BLA in the setting of brain injury; 2. the development of anxiety-like behaviour in the animal model replicates the TBI-induced anxiety in humans; and 3. The nutraceutical ALA prevents the mTBI-induced alterations in the BLA and the anxiety-like behaviour. These findings provide an important guide to the development of novel therapeutic approaches from TBI-induced consequences, directing efforts towards protecting the brain against loss of GABAergic function, in turn improving outcome.

Dr Marini’s team suggest that α-linolenic acid should be further developed to provide novel treatment to patients following mTBI to prevent brain injury and long-term effects of TBI. A natural substance, α-linolenic acid has a wide safety margin and would unlikely cause adverse events.

There is growing public health concern about the long-term effects of traumatic brain injury with its substantial impact on deaths and disability. Providing an effective treatment that has a relatively good safety profile could change the outlook of millions of people worldwide. Dr Ann Marini and her team’s work will likely have an impact on how TBI is viewed and treated across the world.

The Department of Neurology at the Uniformed Services of the Health Sciences is dedicated and committed toward developing novel efficacious therapies to combat the cognitive and neuropsychiatric disorders that follow TBI.

The views and conclusions contained within this article are those of the authors and should not be interpreted as representing the official policies, either expressed or implied, of the Department of Defense.

What are the next steps to ensure α-linolenic acid is suitable for the treatment of mTBI induced anxiety in humans?

Dr Marini is Professor of Neurology at the Uniformed Services University of the Health Sciences, Bethesda, Maryland. She received her PhD in Biochemistry and MD from Georgetown University School of Medicine. After completing an Internal Medicine and Neurology residency, she completed a seven year fellowship at the National Institutes of Health, Bethesda, Maryland.