Biology
Jute is a type of bast fibre plant, of which there are more than hundred species. Jute is used as an affordable natural fibre source for many human purposes. There are only two commercially cultivated species, which have unique fibre characteristics, but they cannot be cross-bred. To gain insight into specific traits of these two species, Basic and Applied Research on Jute (BARJ) Project at Bangladesh Jute Research Institute under the leadership of Professor Maqsudul Alam have performed comparative genomics, and through jute DNA sequencing, identified specific genes that regulate bast fibre biogenesis.

What is jute? If you live in the Western world, you may not have come across this plant, but you might have encountered products made from it in everyday life. Jute is a type of bast fibre plant; the fibres from it are used in products such as ropes, sacks and coir mats. Bast is the fibrous tissue obtained from plant stems such as jute, hemp and flax. Only two out of more than a hundred species of jute are commercially cultivated. These two species have unique fibre characteristics and other physiological traits, but cannot be cross-bred. This leads to reduced genetic diversity in jute. To increase this diversity, and enhance the quality of jute fibres via tailored breeding, BARJ Project at Bangladesh Jute Research Institute aimed to decode the genomes (the entire genetic material) of both these species.

What makes a species unique?
Humans are just one species, and we all have similar characteristic features that allow us to recognise another human. However in the plant kingdom of life, there are close to 400,000 plant species, each having unique characteristics. That makes a rose unique from a daisy or apple, but also results in variety within a plant family. For example, within the Solanaceae family there are species such as tomato, potato and eggplant, all uniquely different in their fruits. Yet they have some common characteristics (such as flower structure) that allow these plants to be part of the same family.

The BARJ Project performed jute genome sequencing of both tossa and white jute.

The Malvaceae family of plants contains economically important diverse crops such as cotton, okra, cacao, and jute. In these species, different plant parts are of economic importance – for example it is the fruit in cacao and okra, whereas it is the fibres surrounding seeds in cotton that are useful to humans. In jute, the bast fibres present in the phloem vascular tissues (that transport photosynthetic sugars) of stems form the basis of many large-scale jute products. The quality of these bast fibres determines the strength, and therefore, multiple uses of jute.

There are more than 100 species of jute (Corchorus sp.), yet only two of them, Corchorus olitorius (tossa jute) and Corchorus capsularis (white jute), are commercially cultivated. Jute has been cultivated since the third millennium BC, by the Indus valley civilisation. Tossa jute originated from Africa and was later brought to the Indian sub-continent, while white jute originated from the Indo-Burma region. Both these species have unique characteristics or traits, controlled by genes that are at the core of the functioning of a cell.

Genes control plant traits
DNA is the blueprint of life. The sequence of chemicals (bases) that are arranged in a specific manner in the structure of DNA, makes up a gene. The behaviour of a cell, and therefore tissue, is controlled by several genes. All characteristics of a plant, ranging from seed germination, to flower colour, fruit shape, as well as structure of stem fibres, are controlled by gene products. Furthermore, whether or not a plant can tolerate stresses such as drought, extreme temperatures, and challenge by pests and pathogens, is also determined by the products of genes.

For a farmer, getting the most out of crops depends on desirable breeding. For instance, if one species is drought-tolerant but not high yielding, and another species in that family is high yielding, then the farmer might want to interbreed these two species so as to get a drought-tolerant and high yielding variety of plant. This is enabled by cross-fertilising one species with another (in the same family); in other words, taking pollen from one species and allowing it to fertilise the ovules (eggs) in another species’ flower. Cross-fertilising allows the mixing of genes between species, resulting in a combination of usually desirable traits.

To cross or not to cross?
The two species of jute that are commercially cultivated cannot cross-fertilise. There are many reasons why this might occur, but it implies that through traditional breeding these two species are not compatible. However there are many inherent traits in these individual jute species that, when combined, are favourable to a farmer. For example, tossa jute is less tolerant to flooding, drought and salinity stress, compared with white jute. However, white jute is more susceptible to diseases than tossa jute. Global climate change has affected jute yields due to crops not being tolerant to adverse conditions. With regards to the bast fibres, tossa jute has stronger fibres than white jute that has fibres of finer quality. Therefore for a jute breeder today, combining some of the desirable traits would be beneficial, to obtain a high-yielding variety with improved quality of fibres. So how can these challenges be overcome if traditional breeding is not possible?

Through this comparative genomics study, several genes related to bast fibre biogenesis have been identified.

BARJ Project performed jute genome sequencing of both tossa and white jute, which involved decoding of all the genes that are present in these plant species. Using highly specialised tools, the arrangement and sequences of genes in both these species were revealed. This allowed comparative genomics of tossa and white jute by observing gene structures. In particular, the authors identified genes regulating bast fibre biogenesis, i.e. genes controlling the origin of bast fibres. The coarse bast fibres of jute result from the high content of lignin in fibre cells. Lignin is a biopolymer that is abundant in the plant cell wall, leading to its toughness. The study identified a few lignin-related genes that confirmed species differences in fibre quality. In addition, the authors confirmed stress tolerance of both species, based on the amount of gene products associated with each stress. The study also identified what led to evolutionary differences between the jute species.

The future of fibre
Through this comparative genomics study, several genes related to bast fibre biogenesis have been identified. This is the next step towards targeted breeding, i.e. choosing combinations of genes that are beneficial to the breeder. This breakthrough will allow new genetic technologies to be used to generate jute plants that are not only more tolerant to various stresses, but also have better quality bast fibres. This would not only increase the genetic diversity of jute, but also satisfy the global demand for better natural fibres in everyday life. 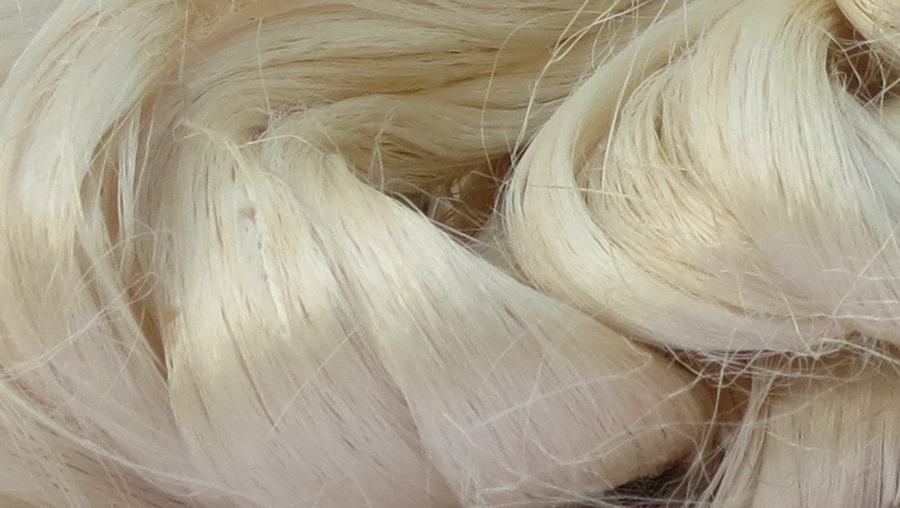 What technology can be used in targeted breeding to get the best jute variety?

<> The sexual incompatibility as well as low genetic variability within a single species of jute are the main challenges in developing an improved variety with beneficial traits by conventional breeding. Therefore, the combination of biotechnology, molecular genomics and the development of germplasm variome will lead to a revolution in targeted jute breeding. Screening of phenotypic variation in germplasm and high throughput sequencing data including whole genome, RNA-seq in jute germplasm leads to identify the genetic variants associated with important traits. These variations allow scientists to find the best combinations of gene networks using recombinant DNA technology or CRISPR technology to facilitate jute improvement.

What challenges do you face to convince a farmer to breed plants in a non-traditional way?

Breeding plants other than the traditional way is a mental barrier to farmers as they are highly confused whether it will be beneficial over the traditional way. Farmers become afraid of applying the modern technologies for non-traditional to breed plants due to their educational limitations. They are acquainted with conventional variety and they think that they own the existing variety, why should they risk a new one? Moreover, most of the farmers are small and marginal farmers, so they hesitate to cultivate a new breed that is developed in the non-traditional way. Therefore, they are not interested in taking extra risks for their crop.

Decoding the genome of two commercially cultivated jute species to understand the molecular basis of bast fibre biogenesis that gives the facilitation to develop finer fibre bearing jute plant and also foster the application of translational genomics in jute improvement.