Thought Leaders
There is only one Earth, but humans are consuming biological resources as if there were more Earths available. Last year, Global Footprint Network marked ‘Earth Overshoot Day’ on 1st August; humanity had used our budget of resources for the year five months early. For over a decade, Global Footprint Network has been striving to reduce this ecological deficit through education initiatives on both an individual and national scale. The organisation is intent on helping forge a successful pathway to ‘one-planet prosperity.’

In 2008, a journalist suggested that you were now more likely to hear the term ‘footprint’ in relation to one’s impact on the planet than the mark one’s foot makes in the sand (www.nytimes.com/2008/02/17/magazine/17wwln-safire-t.html). This shift in thinking has been led and further developed by Mathis Wackernagel, co-creator of the Ecological Footprint concept and co-founder of the Global Footprint Network. Global Footprint Network looks to change the way the world uses its natural renewable resources by publishing simple, scalable data for everybody. The Footprint Calculator, which assesses the Ecological Footprint for each individual based on their consumption and tells them how many planets we’d need if everybody lived like them, is the perfect example of such a tool.

Global Footprint Network’s President, Mathis tells us more about his vision for the future, and how new digital resources, tools and data are helping people understand the grave predicament our one and only planet is in.

Hi Mathis! Can you tell us more about Global Footprint Network in terms of its mission, background and core principles?
Our vision is a world where all can thrive within the means of one planet. Humanity is currently operating an ecological Ponzi scheme, where we are vastly overusing our planet, thereby putting at risk human well-being. Global Footprint Network’s mission has always been to help end ecological overshoot by making ecological limits central to decision-making. Since 2003, we have pursued this mission by producing the National Footprint Accounts, communicating the science of sustainability through the Footprint Calculator and, now for over a decade, Earth Overshoot Day www.overshootday.org. 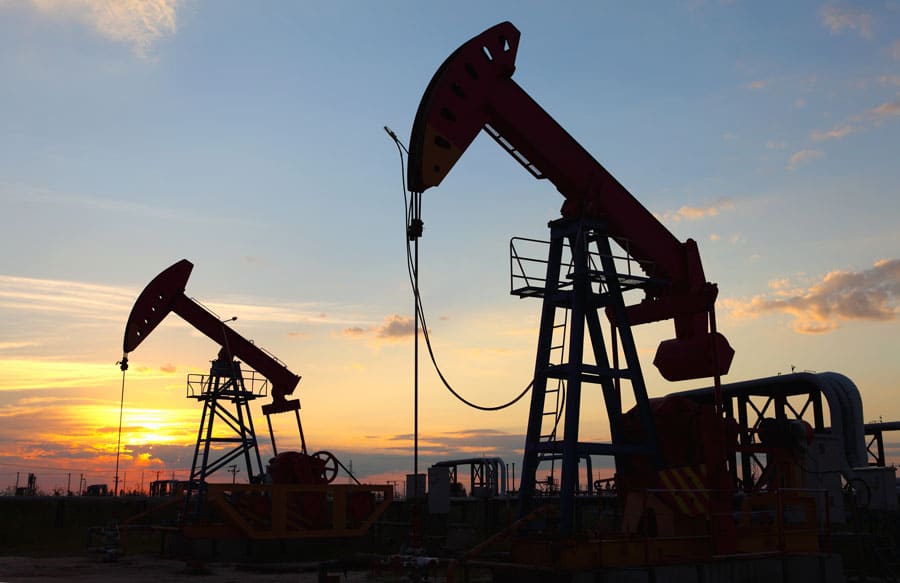 We reach far and wide by partnering with countries, cities and organisations around the world. We have strived, since our inception, to most effectively contribute to making the human enterprise one-planet compatible.

Why did you set up Global Footprint Network and what you do on a daily basis?
There was and still is no other metric available that comprehensively compares human demand with what Earth can regenerate.

As we work with people around the world, my day starts with early morning phone calls and often ends with late night calls. In between, I work with my colleagues to deliver on our mission. This means working on projects, designing new strategies, engaging with potential supporters, etc.

Our vision is a world where all can thrive within the means of one planet.

I have fabulous colleagues at Global Footprint Network which makes doing the work extra rewarding and intriguing.

Last year, Global Footprint Network published an article titled ‘Has humanity’s Ecological Footprint reached its peak?’ Do you think the tide has turned in favour of the planet in recent years?
I wish we could report this. Carbon emissions are still going up, and even more quickly than in previous years. There is a lot of promising technology and many intriguing projects underway, but they are still not reaching the speed and scale necessary to turn the trend, let alone reducing the demand fast enough to avoid the predictable ecological damage. The technology is available, the financials add up, but society is still not willing. 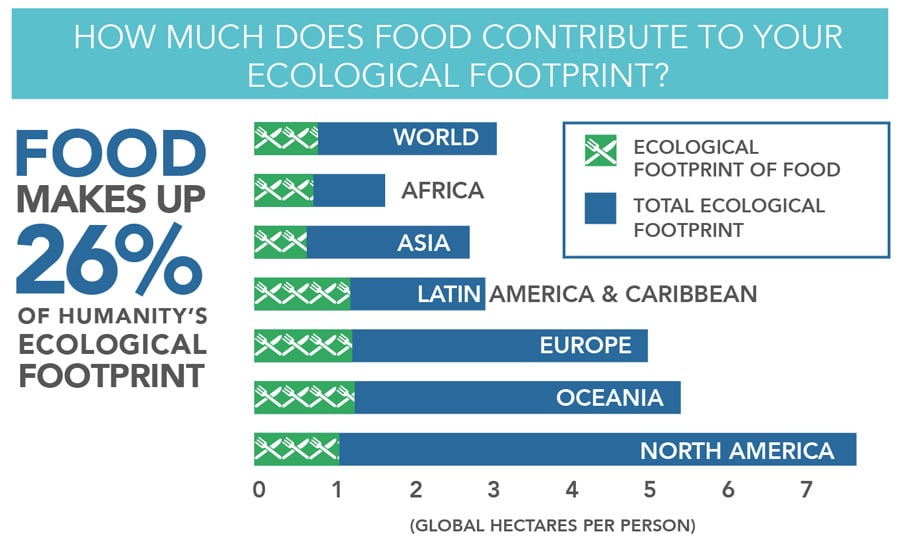 Looking forward, what issues are high on Global Footprint Network’s priority list to tackle in terms of reducing human impact on the planet?
I spend a lot of time thinking about and exploring what is holding us back most significantly. My current hypothesis is that society is committed to a false narrative. If we believe that ‘not being one-planet compatible is not a risk to our own success’, it is unlikely we will act commensurably. Although, much evidence demonstrates that humanity’s ecological overshoot, and each person’s unpreparedness vis-à-vis those trends, are a significant risk to their success. Hence, my priority is to make this more obvious.

Global Footprint Network has won a lot of global awards; what campaign/tool are you most proud of?
The things I am most proud of were put in place by others. For instance, the concept of Earth Overshoot Day is to explain overshoot in more understandable terms. Now, we are generating three billion media impressions per year, on a shoe-string campaign.

The ability to explain, with Earth Overshoot Day, the challenge of sustainability, even in quantitative terms, without using complicated concepts or more than two syllable words is invaluable: ‘From January to August 1, people have taken more from nature than Earth can renew in the entire year’. All two syllable words, except for January with three – but hopefully everyone knows that one! 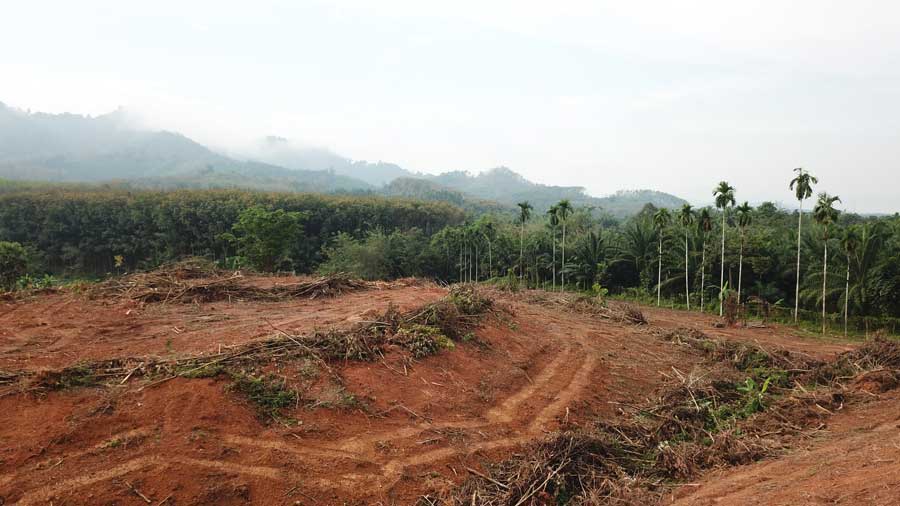 #MoveTheDate is a great campaign – the idea that if we moved Earth Overshoot Day into the future, by just five days every year we would be back to one planet before 2050. We currently use the biological resources of 1.7 Earths. #MoveTheDate is positive – it shows we need to succeed collectively (it is not just about individual suffering), and it is about expanding our resource security.

We need to shift our narrative
and shed our misconceptions about our dependence on nature.

The National Footprint and Biocapacity Accounts reveal interesting realities – check data.footprintnetwork.org for results. They use 15,000 data points per country and year, based on super basic and therefore robust science principles. We call it sometimes, pun intended, ‘pedestrian science’. Of course, the devil is in the detail with such large amounts of data. But the principle is simple: we add up all the human demands that compete for biologically productive space. Any high-school student could do this. 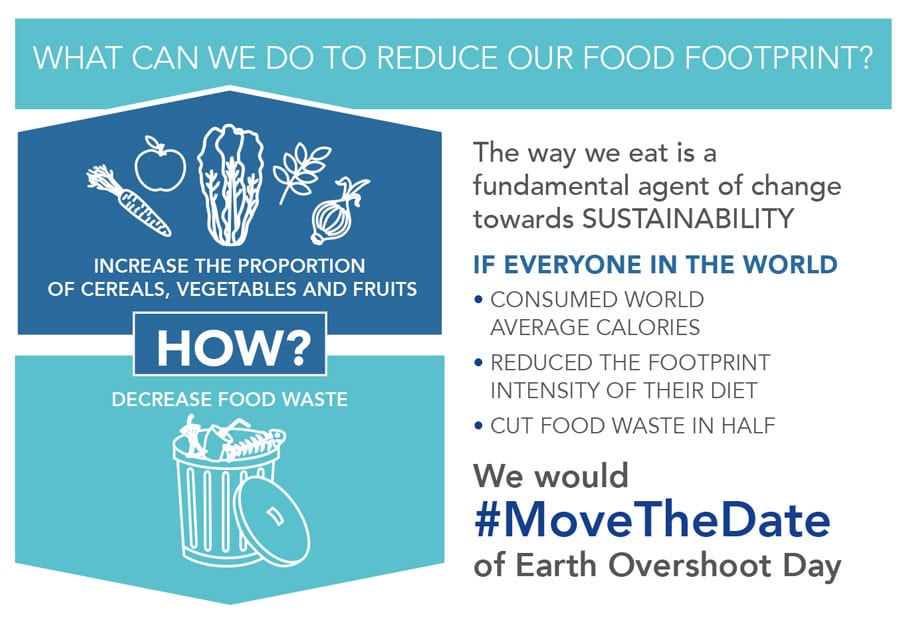 Global Footprint Network’s visual data tools appear to be reaching people globally; what do you think it is about presenting the information in this way that impacts people?
Information must be accurate, relevant and empowering. These are the principles to follow. People must believe it is accurate – and to build trust the information needs to be transparent, and without apparent conflicts of interest. That is why we are now building a whole new initiative to make the National Footprint and Biocapacity Accounts an independent organisation. We still need to reach far more people though.

What do you see as the biggest barriers to reducing the human Ecological Footprint today?
Modern society has a distorted belief system. Society would be better off with a fresh narrative and recognise its dependence on nature. Urbanites believe that nature is no longer important, while we humans have actually become increasingly dependent on material inputs.

Beyond individuals, has Global Footprint Network had positive experiences with organisations and governments who have employed it? How important are these collaborations to the Network?
We called ourselves Network because we realised that as a small group of people, we can only have an impact in collaboration with others, including businesses and national governments. Obviously, the best would be if we could convince all policy advisors that eroding their resource security is a fundamental risk to their country’s or city’s long-term success. There are some timid recognitions, but we still need to scale this way up. And when I say ‘we’, I mean everybody, business schools (who often still teach 20th century understanding of economics), climate advocates, high school teachers, etc. – everybody.

Earth Overshoot Day fell on 1st August last year. What campaigns have you got planned to raise awareness for 2019?
Our goal is to engage people by helping them fall in love with the most significant and intriguing challenges we are facing – how to thrive within the means of our planet. We want to partner with as many people as possible to engage in this journey.

If you would like to work out your own Ecological Footprint or find out more about Global Footprint Network and its work, you can visit their website at:
www.footprintnetwork.org.

Measure what you treasure How Global Footprint Network is using data to show people how to protect our planet was last modified: May 16th, 2019

Global Footprint Network, 2019, "Measure what you treasure How Global Footprint Network is using data to show people how to protect our planet", Research OUTREACH (107). Available at: https://researchoutreach.org/articles/measure-what-you-treasure-how-global-footprint-network-is-using-data-to-show-people-how-to-protect-our-planetr/ (Accessed YYYY/MM/DD)