Behavioural Sciences
The western world today demands a great deal from its inhabitants, both physically and mentally. The prevalence of mental health problems is high, and none more so than those in low socioeconomic status, with financial hardship recognised as a root cause for life stress and anxiety. Although trained in both eastern and western based mindfulness techniques, Karma Jiga applies the western secular approach to reach this population. Using an adapted Mindfulness-Based Intervention (MBI), he delivers mindfulness techniques to those in poverty to help improve their physical and mental well-being, without charge. The potential benefits to the individual and wider community could prove significant in a world where mental health issues seriously affect 1 in 3 people.

It is no surprise to find that those living in lower socioeconomic environments are more prone to suffer from several stress-induced physical and mental disorders. Financial stress is often cited as one of their leading causes, particularly in westernised cultures. It is now well documented that extended periods of stress, regardless of source, can increase susceptibility to a myriad of illnesses and disease, both physical and psychological. Most, if not all of us, can relate to experiencing stress at some point in our lives, but unfortunately for some, this can be a near lifelong affliction. 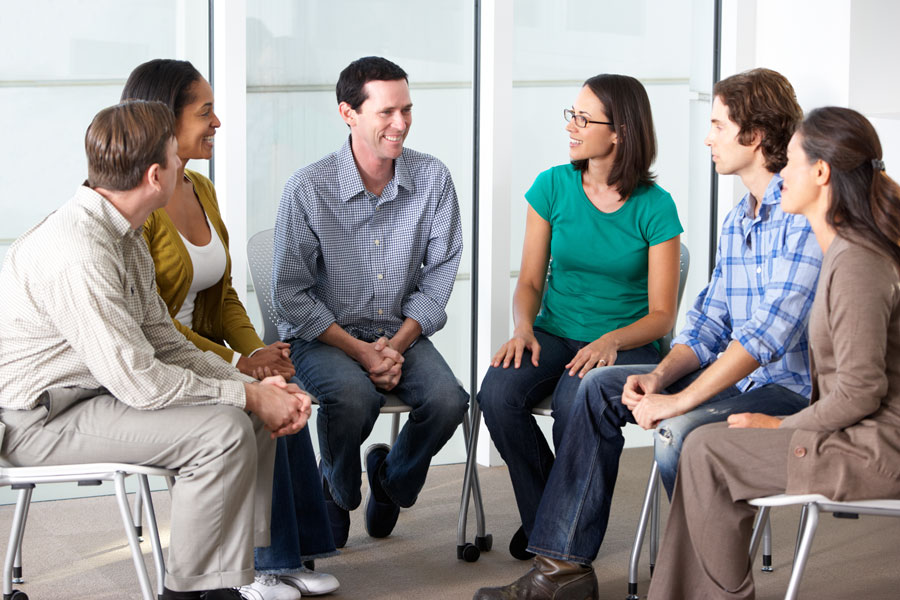 Karma Jiga and Mindfulness-Based Intervention (MBI)
Many practitioners and ordinary people are now switching their focus towards treatments rooted in more Eastern ideals. The words meditation and mindfulness are becoming more common. What may have once seemed like a more ‘far out’ activity is now arguably considered more normal for Westerners. Mindfulness, although it may mean different things to different groups of people, has been defined as the awareness and acceptance of what arises in and around you as it happens ; however, this requires developing an ability to let go of, and become less involved with our thoughts, feelings and emotions as they come to mind.

Mindfulness has been shown to reverse neurophysiological changes caused by prolonged stress.

Typical mindfulness-based interventions, such as Mindfulness-Based Stress Reduction (MSBR) and Mindfulness-Based Cognitive Therapy (MBCT) consist of a 6-8-week programme delivered by trained practitioners. These combine basic Buddhist based meditation practices with a more science-based understanding of stress and wellbeing. The idea is to allow thoughts to come and go and let go of the desire to judge or focus on them. By becoming less attached to these thoughts, the negative impact on a person’s current mental state is lessened. Reports have yielded signs that these approaches can positively influence physical and neurophysiological processes which are harmed by stress such as blood pressure and cortisol levels.

Karma Jiga is trained in both eastern and western mindfulness schools of thought and techniques. He has developed a mindfulness training course aimed at those in low socioeconomic areas called Headroom, and is currently based in Dundee, Scotland. Headroom is a nine-session mindfulness-based intervention (MBI), based on the training in MBSR and MBCT he received at Bangor University. He aims to develop mindfulness techniques specific to the problems more commonly faced by those in low socioeconomic environments, whilst establishing their feasibility. Headroom is free and open to anyone earning less than the real living wage. The potential benefits to the community are now becoming known, with participation increasing as the word spreads! Participants who have completed the course have said that they feel more like their old selves and less stressed when dealing with circumstances without their control.

The science – does it work?
An important measure for any type of treatment plan or psychoeducation course is whether it works and can be verified empirically. Early research investigating the efficacy of MBIs was promising with significant increases in several well-being measures found across twenty studies (Grossman et al, 2004), and whilst some review studies have reported only moderate reductions in anxiety and stress levels (Goyal et al. 2014), the overall trend is positive. The variety of circumstances and mental health issues encountered by those in low socioeconomic environments influences the interpretation of results and makes for a complicated area of study, let alone the fact that genetics may play a significant role in the occurrence of anxiety, stress and depression. Whilst the validity and results of some studies in the mindfulness field have been called in to question, the effects of mindfulness on those in poverty is a unique area of research which needs to be developed.

A primary concern for any MBI programme, especially with low SE populations is attrition, i.e. the rate of course completion by individuals. Knowing that high dropout rates were a common problem which could affect the ability to produce a viable study, Karma Jiga developed a recruitment protocol that would determine the programmes initial feasibility. This protocol was effective in that it improved accessibility by providing for participants needs while taking into account participants individual circumstances. Ongoing course evaluation provided information regarding programme feasibility.

Participants were 107 referred or self-referred members of the public living on low incomes in the most deprived areas of Dundee. However, with post-orientation dropouts, mid-course dropouts and other considerations, the final research group total numbered 40 (20 experimental conditions, 20 control). Participants were guided through a series of exercises and meditations to improve their sense of awareness and physical and mental wellbeing throughout the 8-week course. These were assessed through the World Health Organisation (WHO) Well-being Index and Mindfulness Attention and Awareness Scale (MAAS), both widely used and verified in the field. In layman’s terms, this part of the study was gauging whether this adapted MBI course led to an increase in awareness and well-being, whilst assessing attrition rates to establish the feasibility of the programmes further use. 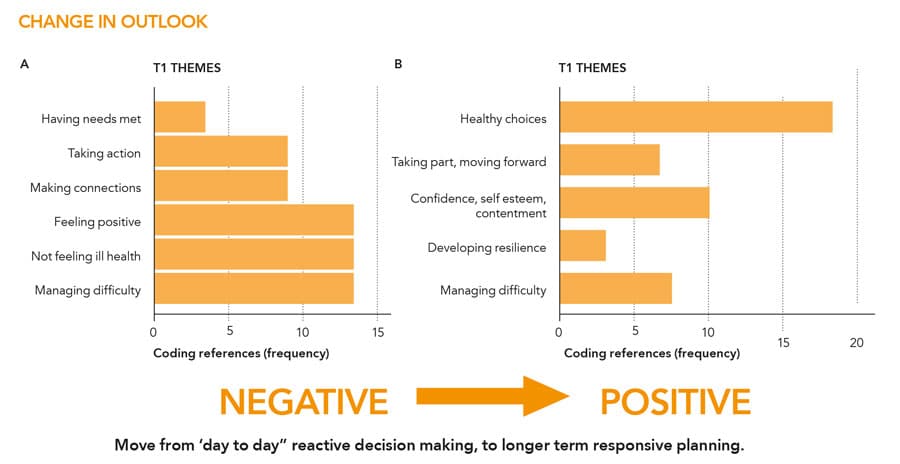 In addition, a thematic and more personal and unique pre and post-course qualitative analysis were carried out to assess how mindfulness practice had affected participants and how they viewed their states of wellbeing before and after the course. Both forms of analysis introduced self-report measures incorporating 5-point Likert scales. Quantitative measures comparing mean scores between the control and experimental groups were conducted. There were notable significant differences in scores between the experimental group completers and control group completers, with experimental/training course completers having significantly higher scores on the WHO-5. The MAAS measures, however, showed no significant change and requires further investigation. Further to this, the experimental or training group showed significant positive differences between pre and post training in the qualitative analysis, which also gave rise to free expression through the addition of two open-ended questions. Thus, positive correlations between the changes in WHO-5 scores and General Wellbeing Scores collectively imply the Headroom MBI typically led to improvements across well-being measures.

Persisting problems of attrition
The persistent problem of attrition remains, with the majority of dropouts in Karma Jiga’s and others work in this area due to reasons beyond the control of the course provider, or the service user. According to Karma Jiga’s work, a frequent barrier to course attendance were medication side effects and the time of day – the latter being an issue he is currently attempting to address and will monitor as the research progresses.

There is a strong positive correlation between debt and poor physical and mental health.

Food for thought and future directions
Karma Jiga is still providing this incredibly valuable approach to the residents of Dundee and hopefully, this will continue to gain momentum and support from other local authorities. Any ambiguity in the research surrounding mindfulness highlights the need to give this and future research the due attention and opportunity to address any anomalies that arise, as the benefits of mindfulness can be profound. They compare favourably with the effects of pharmaceuticals but with little or no negative side effects or ongoing expense. Positive outcomes from mindfulness may not be limited solely to the individual, rather, they have the potential to positively impact the wider community, and in turn the nation. Karma Jiga and his colleagues at Nilupul plan to develop a framework that would allow this programme to be rolled out to other cities, reaching anyone who would benefit. Furthermore, he is looking into how Headroom can be developed into a teaching programme within the further education system to enable peer to peer delivery of the programme within socioeconomically deprived communities.

What is the main barrier to attendance and completion of mindfulness courses and do you have any ideas of how to get around them?
<>At present, the main barrier is cost for the less well off. Mindfulness is more the domain of the middle and more educated class. Even among those who complete a mindfulness course, the number who apply themselves and engage meaningfully in the practices between sessions is difficult to assess. Not everyone is willing to disclose how much or even if they have applied themselves, despite the importance of personal responsibility for individual mental health and wellbeing being emphasised within the course sessions. So reduced cost and inspirational delivery seem to me to be the way forward. 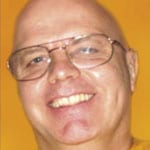 Karma Jiga is trained in the Tibetan Buddhist Tradition and modern-day mindfulness. He is a former engineer, award-winning musician, composer, author, artisan, project manager and current CEO of Nilupul Foundation. His present-day research focus is to provide mental health solutions for those suffering the effects of poverty.

Karma Jiga and his colleagues at Nilupul Foundation’s research is aimed at establishing the feasibility of holding the courses in areas of socioeconomic depression, lowering high levels of attrition by those suffering from the effects of poverty, and developing mindfulness techniques specific to problems more commonly faced by those in these environments.