Health & Medicine
Professor David Jenkins and his team at The University of Toronto investigate the impacts of exchanging carbohydrates for mixed nuts – a source of unsaturated fats – on critical risk factors for cardiovascular disease, such as low-density lipoprotein particle size and apolipoprotein B levels. They also discern that adopting a lower-carb, high-fat diet, reminiscent of the Mediterranean diet, increases glycaemic control in diabetics.

Over 30 million adults in the US currently live with type 1 or 2 diabetes, or prediabetes. In 2015, diabetes was listed as the seventh leading cause of death in the US, resulting in approximately 79,535 deaths that year. Cardiovascular disease (CVD) is a similarly insurmountable problem, responsible for one in every four deaths in the US. Diabetes and CVD are interlinked issues; with each being a risk factor for the other. For type 2 diabetes and CVD, one of the best strategies for prevention and mitigation is adopting a healthy diet. Recently, the American Diabetes Association (ADA) and American Heart Association (AHA) have advocated the ‘Mediterranean diet’ as the way forward for these disorders. Now, Professor David Jenkins looks at the impact of replacing carbohydrates with mixed nuts on CVD risk and diabetes control in diabetics.

Diabetes and cardiovascular disease
Insulin is a hormone produced by specialised cells located in the pancreas called ‘beta cells’. After its release, insulin circulates through the bloodstream and regulates the uptake of glucose to muscle, liver and fat tissues. In a healthy, non-diabetic individual, insulin release is tightly controlled in order to prevent blood glucose levels rising too high (hyperglycaemia), or falling too low (hypoglycaemia). In a diabetic individual, this tight insulin regulation is disturbed. In type 2 diabetes, the focus of Jenkins’s study, insulin receptors on muscle, liver and fat tissues become desensitised. Regardless of the concentration of insulin in the bloodstream, these malfunctioning insulin receptors cannot prompt tissue absorption of excess blood glucose, resulting in thirst, increased urination, bladder infections and serious chronic disease. Diabetes is also closely linked with CVD, a broad term encompassing multiple disorders including heart attack, angina, and stroke. These diseases arise from the build-up of fatty deposits and calcium in arteries in a condition called ‘arteriosclerosis’, associated with high blood low-density lipoprotein cholesterol (LDL-c) levels. This condition causes narrowing of the arteries, and restricts blood flow to the heart and brain, which in serious cases can lead to permanent heart or brain damage.

Both the ADA and the AHA advocate for a diet high in unsaturated fats, such as those found in oily fish, avocados and nuts.

The Mediterranean diet and its benefits
For type 2 diabetes and CVD, the main risk factors are: (1) being overweight or obese, (2) having a poor diet, (3) a diagnosis of diabetes (for CVD), (4) high blood pressure and (5) high cholesterol. Altering one’s diet is one of the most easily addressable risk factors, and both the ADA and the AHA advocate for the Mediterranean diet, which focuses on consuming unsaturated fats (both monounsaturated fats [MUFAs] and polyunsaturated fats [PUFAs]), such as those found in olive oil, avocados and nuts. Nuts, such as almonds, Brazils, cashews, hazelnuts, macadamias, pecans, pine nuts and pistachios, are a particularly good source of MUFAs. Walnuts are a good source of polyunsaturated fat, especially omega-3 fatty acids. The consumption of unsaturated fat has been linked with reduced incidence of diabetes, and reduced blood LDL-c levels in diabetic and non-diabetic patients. As a result, Professor Jenkins and his team designed a study focusing on the impact of exchanging a portion of carbohydrates for mixed nuts in individuals who have type 2 diabetes and are at risk of CVD.

Lower carb plus plant oil: the solution?
Professor Jenkins and his team at the University of Toronto studied a total of 117 men and post-menopausal women, all of whom had a previous diagnosis of type 2 diabetes. All participants were receiving non-insulin medication to lower their blood glucose levels, and had blood glycated haemoglobin (HbA1c) levels of between 6.5-8.0%. HbA1c is an indicator used by medical professionals to estimate an individual’s blood glucose level over the previous two to three months, and is the standard test used to monitor treatment of type 2 diabetes. A healthy HbA1c is usually between 4-5.6%, whilst in diabetes this level is usually over 6.5%. The participants were separated into three groups and subjected, in a parallel fashion, to one of three diets, for three months. Diet (1) was the ‘full-dose nut diet’, in which ~450 calories of energy (kcal) were provided in the form of mixed nuts, equal to 75 grams of mixed nuts per day. Diet (2) was the ‘full-dose muffin diet’ in which ~450 kcals were provided in the form of three whole-wheat muffins, equal to ≈188 grams of muffins per day. Diet (3) was the ‘half-dose nut diet’, in which ~450 kcals were provided as half portions of nuts and muffins. While on these diets, each individual was informed that this was not a weight loss study but that if weight loss was their goal the dietitian would provide them with appropriate advice. Participants attended sessions at weeks -1, 0, and 2, 4, 8, 10 and 12, where their weight and blood pressure were measured and a fasting blood sample was taken. The participant’s blood samples were then measured for HbA1c, blood glucose, high-density lipoprotein cholesterol (HDL-c), LDL-c and apolipoproteins A1 and B concentration.

Down with ‘bad’ cholesterol
The study found that, for the full-dose nut diet group, MUFA consumption increased by up to 9.2% when compared with the control full-dose muffin group, which was attributed to decreased carbohydrate consumption and increased nut consumption. The baseline median HbA1c, which was 7-7.1% at the start of the experiment, had dropped 19% by the conclusion of the study for the full-dose nut diet group. These data support evidence shown in other, similar studies, that increasing nut consumption in diabetes improves glycaemic control. Additionally, compared with the full-dose muffin diet, total cholesterol, apolipoprotein B (ApoB) — a primary constituent of LDL-c — and LDL-c levels were reduced, by -0.6 mmol/L, –0.09 g/l and –0.09 mmol/L, respectively in the unadjusted model. LDL-c particle size was also measured, and a –0.35 mmol/L reduction of particles with a size of less than 224 Ångstroms was found. This is an important discovery, as small LDL-c particles are thought to promote atheroma formation, leading to enhanced narrowing of the arteries, in comparison to larger LDL-c particles. These results support the hypothesis demonstrated in previous cohort studies, that increased nut consumption may lead to reduced CVD risk.

Consumption of MUFAs and PUFAs has been closely linked with reduced diabetes incidence and reduced cholesterol levels. 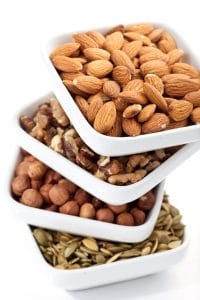 A unique study
Taken together, the results of this study suggest that swapping the higher glycaemic index carbohydrates in muffins, and presumably other similar foods, for nuts enhances glycaemic control in individuals with type 2 diabetes. Additionally, Professor Jenkins and his team also demonstrated that consumption of nuts in place of carbohydrates reduces ApoB levels, a recognised CVD risk factor, and reduces small LDL-c levels, an emerging CVD risk factor. This study is relatively novel in its field, as it is one of few to test the effects of mixed, instead of single type nuts in diabetes and to investigate the impacts of this nut consumption on apolipoproteins. It is the only study, thus far, to have investigated the impact of nut consumption on LDL particle size.

Do you believe that diets high in nuts, such as the Mediterranean diet, could replace blood-glucose lowering medication in patients with type 2 diabetes?

<>I am committed to proactive personal advocacy for academic pathology, a cause I am passionate about. I have taken to devoting a portion of each classroom session with medical students to my practice of pathology showing with actual cases how pathology can yield diagnoses of major importance in the care of patients. I also point out how correlation of clinical and pathological features of a case can yield information and ideas to generate new knowledge which is the goal of research. I also conduct an increasingly popular and well attended monthly cardiovascular pathology conference for our Center for Advanced Cardiopulmonary Therapies and Transplantation where I show how our pathology studies have contributed to the unravelling of the cause of patients’ problems and how our studies contribute to their care. I strive to be a role model of a physician-scientist engaged in research, teaching and clinical service with a focus on cardiovascular disease and pathology.

David Jenkins was educated at Oxford and is a University Professor at the University of Toronto in the Department of Nutritional Sciences & Department of Medicine and Director of the Clinical Nutrition & Risk Factor Modification Centre, St. Michael’s Hospital & Scientist at Li Ka Shing Institute.

Professor Jenkins’ work focuses on the role of nuts in the diet, particularly as a source of monounsaturated fats.

The International Tree Nut Council Nutrition Research and Education Foundation, the Peanut Institute, Loblaw Companies and the Canada Research Chairs Program of the Government of Canada