Kazushige Yokoyama, Professor of Chemistry at the State University of New York Geneseo College, investigates how peptides interact. Along with Akane Ichiki, an undergraduate student at the institution, his team have been investigating the peptides involved in fibrillogenesis, the process which occurs in the brain to form aggregates responsible for some of the symptoms involved in neurodegenerative diseases like Alzheimer’s and Parkinson’s disease. Their system involves coating gold nanoparticles with peptides and using spectroscopic techniques to investigate how these peptides interact with the nanoparticles and with each other.

According to the World Health Organization, about 50 million people worldwide are living with dementia. Despite its association with older people, dementia is not considered a normal part of ageing. Alzheimer’s disease and Parkinson’s disease are a major cause of disability and dependency among older people worldwide, resulting in the progressive deterioration of cognition and movement. The effect of these can be overwhelming – and not just for those with dementia, but also their carers and families.

Aggregate formation
Studying the way these aggregates are formed is difficult. The aggregates themselves are composed of multiple peptides. The peptides combine to form oligomers – a repeating structure composed of multiple peptides. These continue to grow, joining together and eventually becoming large enough to form fibrils, which are a major component in the toxic aggregates associated with these neurodegenerative diseases.

The process of fibril formation, known as fibrillogenesis, is key to understanding these diseases. However, it is also difficult to investigate: the ‘pre-fibril’ oligomers form reversibly and are short-lived. Some believe that this oligomer is neurotoxic but the resulting fibrils are not. As a result, it is difficult to identify crucial aspects of how fibrillogenesis occurs – including how proteins even begin to form fibrils at all. There has been no direct investigation to identify the section of peptides which are responsible for initialising networking with others in the fibril.

A system to capture initial fibrillogenesis
To examine this process, Kazushige Yokoyama, Professor of Chemistry at the State University of New York Geneseo College, leads a group investigating an initial stage of fibrillogenesis using a system involving peptide-coated gold nanoparticles. This research has also involved the work of Akane Ichiki, an undergraduate student at the organisation. Within the project, she has co-authored a book chapter on how the system has been used to investigate peptide networking.

The group’s system for studying the networking between proteins involves coating gold nanoparticles with certain peptides known to form fibrils in neurodegenerative diseases. Their aim is to capture the unstable species existing only at the initial stage of the fibrillogenesis by utilising the surface potential of the gold nano-particles.

Their system is particularly effective for studying the process because when the peptide-coated gold nanoparticles collect together in a network, the suspension undergoes a drastic colour change, allowing the process to be quantitatively investigated using spectroscopy.

Lying down or spiking out?
To understand which segment of a single protein is used for bonding within the fibril network, Yokoyama’s group first determined how the peptides attach to the spherical surface of the gold nanoparticle.

The group investigated three types of peptides – amyloid beta 1-40 (Aβ1-40), α-synuclein (α-syn) and β2 microglobulin (β2m) – all of which are key components of fibrils. The shape of these peptides is approximately a prolate spheroid – a shape best described as being the equivalent of a sphere shaped from an oval rather than a circle. Think of a rugby ball!

The peptides therefore have two options when attaching to the nanoparticle: either in a ‘lie-down’ orientation, or a ‘spiking-out’ orientation. In outreach sessions, Yokoyama uses the example of eggs surrounding a beach ball: would they lie on their side or on one of their ends?

In outreach sessions, Yokoyama uses the example of eggs surrounding a beach ball: would they lie on their side or on one of their ends?

Initially, the group expected the ‘lie-down’ orientation to be favoured, with the long edge of the peptides touching the nanoparticle. This would maximise the contact area, allowing a strong bond to form between the peptides and nanoparticle.

However, the number of peptides inferred to exist on the surface of each nanoparticle would be impossible to explain using the lie-down orientation: each peptide would leave too much space on the surface uncovered. Based on their observed data and using a mathematical simulation, the only explanation for the calculated number of contact points was that the peptides must be arranged in the spiking-out orientation. This would mean that the densely aligned small contacting areas could cover almost the whole surface of a sphere with ‘spiking-out’ peptides.

This information about the peptides’ orientations also allowed the team to propose which specific sections of each of the peptides might act as contact points with the gold nanoparticle.

Using transmission electron microscopy (TEM), the team gathered images to investigate these collections of gold nanoparticles held together by peptide networks. Each joint conformed by peptide networking in the aggregated gold particles acts as an approximation for the early, difficult to investigate stage of fibrillogenesis. Given that the team knew for each peptide which end of the spheroid was in contact with the nanoparticles, the opposite end was identified as being responsible for bonding to other peptides.

How do peptides glue nanoparticles to each other?
The TEM images were used to determine the average distance between nanoparticles. This spectroscopic data was analysed using mathematical procedures to analyse the chemistry, leading to an interesting discovery about the drastic nature of how proteins change their conformation as they are sandwiched by gold particles.

The team found the average distance between adjacent gold nano-particles was much shorter than the length of one peptide, revealing that each peptide is bent by and tangled into the peptides around it. The tangling is thought to be a result of attractions and repulsions between charges on the peptides.

Revealing detail charge distribution over a peptide surface
The team proceeded to reveal more chemical information for each type of peptide, by finding a general rule governing the distance between adjacent peptides (Sd) with respect to ‘coverage ratios’ (Θ) of the gold nanoparticles by the peptides. Nanoparticles coated in Aβ1-40 or α-syn achieved denser packing by strongly inviting a second layer of peptides to form as the distance between adjacent peptides of the first layer increased. It was speculated that these peptides have a slightly positive charge on their top and bottom ends or ‘spikes’, as well as a slightly negative charge around their middles. These partial charges are a result of the specific amino acid sequences in the peptides.

These experiments provide empirical evidence of the mechanisms which cause toxic aggregations of peptides in the brain in neurodegenerative diseases.

It helps to imagine that a surface of gold nanoparticles is like a sea of electrons and each peptide is a ‘spike ship’ with a slightly positive bottom. When networking occurs, the slightly positive ‘spike ship’ is attracted to the negative surface of the nanoparticles (sea of electrons). When the distance between each ‘spike ship” is greater, there appears to be more space to place ‘spike ships’. These extra ‘spike ships’ correspond to a secondary layer of peptides or the peptides approached to network, resulting in a greater density.

However, the opposite trend is seen for β2m-coated nanoparticles – greater distances between each peptide actually lead to a lower density of β2m peptides. This is because β2m has a different charge distribution. A relatively small region of its spikes has a partial negative charge while most of the region possesses a partial positive. Unlike the other two peptides, this peptide was found to prefer to gyrate like a spinning top.

The more distance between two adjacent peptides, the more the β2m gyrated, with a larger tilting angle. This creates more partial positive regions, discouraging the second layer of peptides from attaching to the nanoparticle due to the repulsion between positive and positive charges, causing a lower density.

Applications and implications
Yokoyama’s team has found evidence that there is a general principle shared by even different peptides, associated with different neurodegenerative diseases, when they interact with solid surfaces. All peptides tested in this work orientated themselves in a way to maximise networking with the other peptides. This is important for understanding how peptides interact during fibrillogenesis and may help us understand other diseases too.

Peptide-coated nanoparticles have important applications in biosensors, disease controlling materials and cellular control. Most crucially, these experiments provide empirical evidence of the mechanisms which cause toxic aggregations of peptides in the brain in neurodegenerative diseases.

A spiking-out orientation was proven to be highly interactive in a spike protein (s-protein) characteristic of the SARS-CoV-2 virus, responsible for the COVID-19 outbreak. As an s-protein binds to a cell receptor during cell infection, a conformational change can occur, triggering an effusion process followed by a replication of the virus. This process involves similar chemistry observed in this study where a spiking-out peptide changes the conformation under acidic conditions, before peptide-networking occurs. Notably, the approach used in this study may well be helpful for understanding how the COVID s-protein attacks cells, providing clues about how to prevent the virus.

How could knowledge of peptide–solid surface interfaces help us to understand and treat diseases other than neurodegenerative syndromes?

<=”acceptedAnswer”>As represented by cells, skin, organs or bones, the human body contains so many solid surfaces. Thus, biochemistry between proteins and solid surfaces are observed all over the human body. A principle found in this study concluded that an energetically preferred path for a protein to interact with a solid surface is to create a maximum coverage by working together with the other proteins. With this principle, it allows us to predict and understand the mechanism of diseases or to design the drugs which would effectively target a particular protein causing a disease.

What can peptide-coated nanoparticles tell us about the causes of dementia? was last modified: September 2nd, 2021 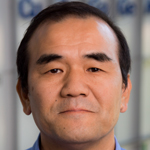 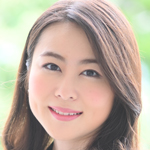 Akane Ichiki is currently a senior undergraduate student at the State University of New York Geneseo College (USA) under the Biochemistry Program. She has co-authored four publications on the nano-interface structure of amyloidogenic peptides. Ichiki is the co-president of the Biochemistry Club and the co-founder of International Peer Mentor (IPM) in Geneseo.

Prof Yokoyama uses nano-gold particles to examine what makes proteins bond. His work has potential to be applied to any proteins located over a spherical shape, including the spike proteins observed in the novel coronavirus.

Yokoyama, K., Ichiki, A. (2020). What can peptide-coated nanoparticles tell us about the causes of dementia?. Research OUTREACH, Available at: https://researchoutreach.org/articles/peptide-coated-nanoparticles-dementia/ (Accessed YYYY/MM/DD)