Health & Medicine
Muscular dystrophies are genetic conditions that cause muscles to become progressively weaker. Researchers are investigating several novel approaches, including gene and stem cell therapy, to meet the challenges of these serious illnesses. Recently, Dr Yoshitsugu Aoki of the National Center of Neurology and Psychiatry, Tokyo and colleagues have drawn on research from around the world to create a picture of the current state of urine-derived stem cell research in this area. This covers several promising new discoveries, offering hope for patients with these potentially life-limiting conditions.

At the cutting-edge of medicine, gene therapy is offering new hope to patients with serious genetic diseases. Once confined to the realms of science fiction, gene therapy can make a real difference to the quality of life for many patients. However, while these new treatments can be very effective in reducing symptoms, they do not yet offer a cure. Researchers continue to search for and explore new ways to treat genetic illnesses.

Muscular dystrophies are a group of genetic disorders which cause muscles to progressively weaken over time. This is a result of mutations in some of the genes which carry the code for essential muscle proteins. Some people with these diseases can now be treated with a gene modulating therapy that temporarily restores the function of these proteins. Unfortunately, this treatment is not always effective, and can sometimes trigger an unwanted immune response. It is not a cure.

Sadly, despite recent advances in treatment, many muscular dystrophies remain life-limiting. To improve the prognosis of patients with these conditions, researchers continue to expand the boundaries of biomedical science.

Modelling neuromuscular diseases
Duchenne Muscular Dystrophy (DMD) is a genetic condition caused by a mutation in the gene that creates the muscle protein dystrophin. Dystrophin plays a vital role in maintaining muscle structure; in people with DMD, a lack of dystrophin means muscles gradually accumulate damage.

Dr Yoshitsugu Aoki, of Japan’s National Center of Neurology and Psychiatry, is an expert in neuromuscular disorders like DMD. In recent work, Dr Aoki and his colleagues considered the different approaches to modelling diseases like muscular dystrophies. Traditionally, many studies of this type are carried out in mice. Ideally, however, human cells would be used.

Using animals, especially mice, as models for human diseases has many advantages; for example, the ability to manipulate particular genes. Mouse models are very well-understood and have undoubtedly facilitated medical advances that would not otherwise have been possible. However, genetically and physiologically, humans and mice are very different. Comparing the ways in which both diseases and treatments work between the two species is challenging.

Researchers have identified a number of different stem cell types which could be adapted to treat muscular dystrophies.

Urine-derived cells
One solution to this problem could be to use human cells for disease modelling. Dr Aoki and his colleagues have recently considered promising sources of cells for this purpose, including urine-derived cells (UDCs). Unlike other possible sources, such as skin, muscle or blood samples, cells can be obtained from urine non-invasively and with no risk of harm to the patient. They can also be collected repeatedly (and cheaply) from the same patient.

Urine-derived cells have already shown their potential in modelling numerous different diseases. In recent work, Dr Aoki and his team developed a new, non-invasive system to model DMD in UDCs. The cells used originate in the kidneys and urinary tract and possess the properties of stem cells; that is, they are able to develop into several different types of cells, with different functions.

The team used UDCs in two ways. First, they successfully encouraged the UDCs to develop into healthy myotubes (muscle fibre cells). This was achieved by manipulating a gene called MYOD1, which plays an essential role in muscle development. In this work, the team used MYOD1 to effectively re-programme UDCs to become myotubes. In people with DMD, the myotubes created in vitro (outside the body) with this method could be used to investigate the precise nature of the disease in each individual.

Second, Dr Aoki used the UDCs to explore an exciting genetic technique called “exon-skipping.” In exon-skipping, cells are prompted to “skip” the mutated part of a gene when making a protein. This is done by building a short piece of nucleic acid (the substance from which DNA is made) to bind to the mutation, which causes that part of the genetic code to be skipped. The result is a protein that does not carry the faulty component, but is still functional. Exon-skipping is currently attracting a great deal of research interest as a potential treatment for DMD, as it could allow cells to create functional dystrophin.

The team were able to successfully demonstrate exon-skipping in UDCs from DMD patients with different types of mutation. They also discovered that their UDC model can be used to identify particular nucleic acid sequences that skip the mutated part of the gene. This could allow each DMD patient to be screened to discover the precise nature of the mutation they carry (as DMD can result from more than one mutation). As a result, a personalised exon-skipping treatment could be developed.

While the techniques described by Dr Aoki and his colleagues require further refinement, the results of this research are extremely promising. An important future step will be to test, through clinical trials, whether the exon skipping proven in vitro is as effective when used in vivo.

From modelling to stem cell treatment
In another strand of work, Dr Aoki recently led an original article and a review into the newest, most advanced treatments for muscular dystrophies. In this, Dr Aoki and his colleagues had a particular focus on DMD and on one type of potentially revolutionary approach to treatment: stem cell therapy.

Normally, skeletal muscle (i.e. the muscles that are attached to bones) has a remarkable ability to heal itself after injury. Muscle stem cells, particularly a type called satellite cells, play a crucial role in the healing process. For this reason, researchers have targeted satellite cells as a potential treatment route for muscular dystrophies. Studies using mice have produced promising results, with transplanted satellite cells leading to restored dystrophin and better muscle function. Research with DMD patients has begun; however, more work is needed before this can become a widely-used treatment.

As with all types of transplant, there is a possibility that donor stem cells will be rejected by the recipient. A better solution would be to use the patient’s own cells which have been collected and genetically modified to “fix” the faulty dystrophin gene. However, the genetic modification process can render the stem cells less effective. 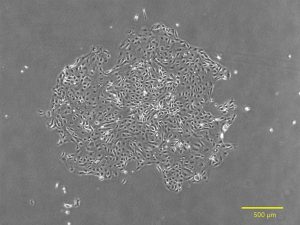 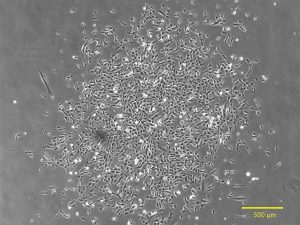 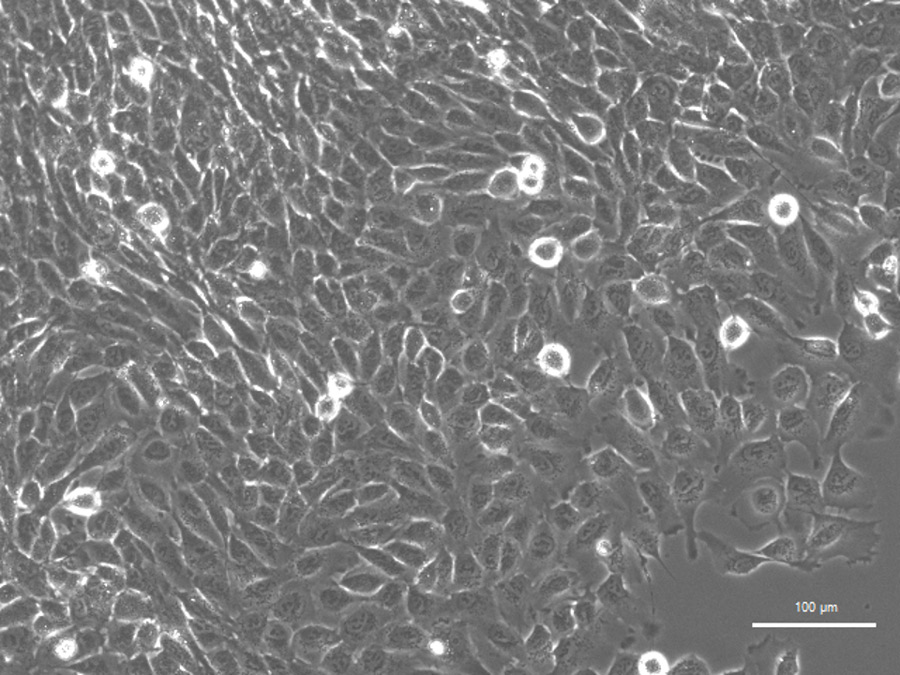 Growing stem cells
Another challenge is generating enough stem cells for an effective treatment. In some muscular dystrophies (including DMD), most muscles in the body are affected, which means that treatment would require a very large number of modified stem cells. Stem cells, once collected, need to be expanded (i.e. grown in number) in vitro before being administered to the patient.

When stem cells are grown in vitro, their capacity for generating new muscle tends to reduce. Researchers have discovered that a very specific environment is needed in order for stem cells to function at their full potential, both in vitro and in vivo, i.e. in the muscle. Understanding how environment affects muscle stem cells is crucial if this approach to treatment and disease modelling is to progress.

New genetic techniques are offering different ways to tackle the problems of gene mutations behind diseases like DMD.

Supporting stem cells
One strategy to help muscle stem cells keep their useful properties in vitro is to coat the cells with a substance that mimics their normal environment. This substance can contain other types of muscle cell, or biomaterials – man-made substances built to interact with biological systems.

Another approach is to actually create artificial muscles in vitro, using satellite cells and other muscle cells combined with extracellular matrix. Muscle tissue created in this way can partially restore the function of damaged muscles. Like stem cells, it can also be used as a useful model for studying the progression of the disease. 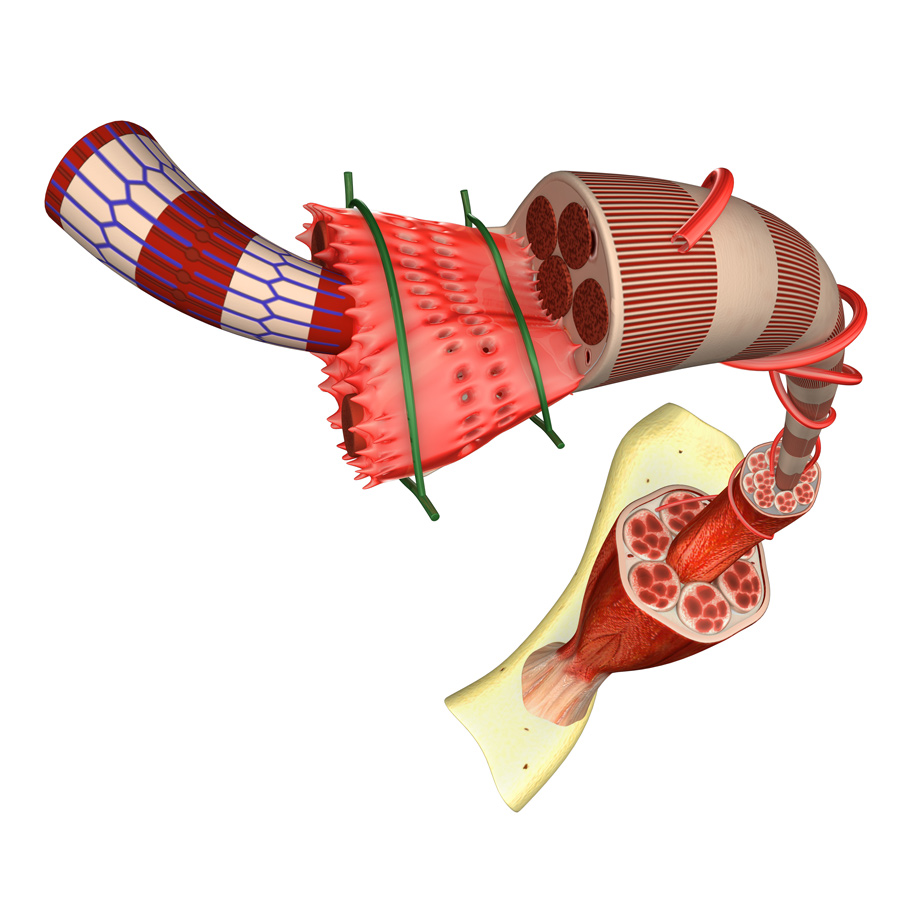 These methods hold great potential in repairing damaged muscles. However, applying these techniques as treatments for conditions like DMD, where entire large muscles are affected, is yet to become a reality.

The future of muscular dystrophy research and treatment
Stem cells are a valuable tool in muscular dystrophy research in two ways: by acting as models for the disease, and in their role as a direct treatment for the condition. Recent work has shown that stem cell transplantation may not only be able to restore dystrophin function in people with muscular dystrophies, but that it might also rejuvenate the cellular environment, effectively limiting the further progression of the disease. At the same time, new genetic techniques like exon-skipping are offering different ways to tackle the problems of the gene mutations behind diseases like DMD.

Ultimately, these innovative approaches – in disease modelling, in gene therapy and in stem cell treatment – seek to do one thing: improve the prospects of those living with serious genetic conditions like muscular dystrophies. The challenge taken on by Dr Aoki and other researchers, of developing combined stem cell transplantation medicine and precision exon skipping approaches for restoring tissue architecture and function, may soon allow this goal to become a reality.

How soon are we likely to see stem cell treatment become routine?

<> Efficacy and safety, as well as quality, cost and speed of new medicine, are essential factors for the development of stem cell therapies. To date, autologous transplantation medicine using cultured epidermal stem cells and chondrocytes is a common approach for skin and articular cartilage repair. In addition, allogeneic hematopoietic stem cell transplantation with immunosuppressive agents such as tacrolimus is a widely performed treatment for hematologic malignancies.

Currently, stem cell therapy using Nobel-winning induced pluripotent stem cells (iPSC) or urine-derived cells (UDC) is thought to be promising. For example, clinical trials of iPSC-derived retina cell transplant for age-related macular degeneration are ongoing in Japan and USA. iPSC and UDC could be used in the treatment of musculoskeletal, cardiovascular and autoimmune disorders, cancer, and drug discovery and development. Stem cell therapy is considered to transform the healthcare industry, and the global stem cells market size may reach 11 billion USD by 2029. 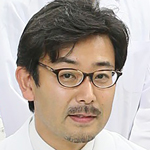 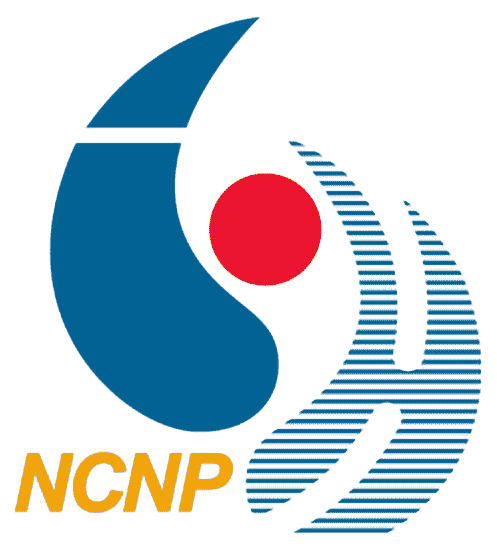