Until now, a great deal has remained unknown about the relationship between programmed cell death and bacterial infections. However, recent work by Dr CJ Anderson and Professor Kodi Ravichandran from VIB-UGent, Belgium, has shed new light on this topic and introduced a new layer to the complex host–pathogen interaction. The team has shown that dying mammalian cells produce and shed metabolites that intestinal bacteria, such as Salmonella and E. coli, use as fuel to assist them in colonisation during food poisoning, inflammatory conditions, and chemotherapy-induced mucositis. They have termed this process Death-Induced Nutrient Release (DINNR) and it raises exciting possibilities for therapeutic intervention.

The human body harbours an estimated 38 trillion bacterial cells, which is more than the 30 trillion human cells that make up an average adult body. The majority of these bacteria reside within our intestinal tract and play a crucial role in helping to maintain our health. To do so, this microbial community must remain in perfect balance. When this balance is tipped due to an alteration in the composition of the microbial community, a process commonly referred to as ‘dysbiosis’, it can cause or exacerbate numerous pathologies. In addition to the threat of dysbiosis, we are constantly exposed to external microbes, meaning that food or water-based infections (‘food poisoning’) are remarkably common.

In a healthy adult human, billions of cells die each day via a process of programmed cell death, such as apoptosis. Apoptosis allows cells to ‘self-destruct’ in response to an appropriate trigger and the process is integral to life, as it controls the growth, development and turnover of cells. The final stage of the apoptotic process is the rapid and controlled removal of cell corpses and debris by neighbouring or recruited healthy cells, before any harmful effects are realised.

Interestingly, previous work from the Ravichandran lab, led by former graduate student Chris Medina, demonstrated that the dying cells are not inert cells waiting for removal, but instead play an integral part in the clearance process by releasing soluble metabolites that diffuse within a tissue to help neighbouring healthy cells to find, target, and clear the corpse. In their 2020 study, the team showed that different cell types undergoing apoptosis, induced by different stimuli, release specific metabolites, a subset of which are shared across all of the apoptotic cells. A portion of these soluble metabolites are released from apoptotic cells through their Pannexin-1 channels. Importantly, RNA sequencing demonstrated that the metabolites released from apoptotic cells can act as signalling molecules that induce specific gene programs in healthy neighbouring cells, including suppression of inflammation, cell proliferation, and wound healing. The team also went on to show that mixtures of just six metabolites released from apoptotic cells could alleviate specific types of inflammation in vivo, raising the possibility for metabolite-based therapeutic intervention for inflammation disorders.

Bacteria are highly efficient organisms in terms of regulating genes involved in metabolic function, such that these metabolic enzymes are often only expressed when their substrate is present.

This work was fundamental to advancing the concept that apoptotic cells release metabolites as ‘good-bye’ signals to actively modulate outcomes in tissues. Dysfunction of apoptosis, including failure to clear the dying cells, can cause diverse pathologies throughout various tissues including the gastrointestinal tract.

It has long been recognised that a relationship exists between mammalian cell death and gastrointestinal pathologies, with an underlying microbial component. Several studies have shown that many foodborne pathogens, including some strains of Salmonella, can induce programmed cell death. Furthermore, patients with inflammatory bowel disease have been found to have increased levels of cell death in their gut and an imbalance in the gut microbial community. However, the direct effect of dying mammalian cells on bacterial growth has, until now, been missing.

Scientists have shown that the process of cell death itself can indirectly influence bacterial infections by changing the body’s immune response. At the same time, other researchers have been investigating how dying mammalian cells communicate with their neighbouring cells. CJ Anderson, Kodi Ravichandran and their team from VIB-UGent have established a link between these two fields of study by asking an important question: ‘If dying intestinal epithelial cells produce and shed molecules that can be recognised and sensed by neighbouring healthy cells, can certain bacteria also sense these same molecules as a means to acquire nutrients/food for bacterial growth’?

Programmed cell death boosts bacterial growth
To address this question, the team developed a research model that was designed to induce apoptosis in mammalian cells and test whether the released soluble metabolites impacted bacterial growth.

The researchers started by growing cells from mouse colonic tissue and induced apoptosis in these cells by treatment with the chemotherapeutics staurosporine or doxorubicin. The cultured cells underwent programmed cell death and the cell free supernatant from these explants was collected. Interestingly, the researchers found that Salmonella growth increased after exposure to apoptotic supernatants as compared with exposure to fresh medium. Using colonic explants from mice that lack caspase 3 and caspase 7, both of which are essential components of apoptosis, they found that following staurosporine treatment of the colonocytes, the collected supernatant was unable to enhance Salmonella growth; thereby demonstrating the requirement of programmed cell death in promoting Salmonella growth.

As well as enhancing Salmonella growth, the apoptotic supernatants from human colonic epithelial cell lines also enhanced the growth of a human intestinal strain of Escherichia coli, the pathogen Klebsiella pneumoniae and E. coli bacteria obtained from patients with Crohn’s disease, colorectal cancer, and urinary tract infection. Notably, forced cell death, or necrosis, of colonic cells did not enhance Salmonella growth, again highlighting the requirement of programmed cell death for bacterial growth. These experiments established that programmed cell death is sufficient to boost bacterial growth and this occurs, i) when death is induced by different triggers, ii) in both mouse and human epithelial cells, and iii) using multiple species of bacteria.

Next, by employing a rigorous filtration strategy, the team demonstrated that soluble factors, less than 3kDa in size, released from apoptotic epithelial cells were responsible for augmenting pathogenic, commensal and opportunistic Enterobacteriaceae growth. Perhaps most interestingly, the team discovered that the same ‘good-bye’ signals used by mammalian cells can also be used as nutrients/food by the Enterobacteriaceae, suggesting that there might be competition for these molecules between the two classes of organisms. When these six metabolites were tested further, the team revealed that two of the six metabolites (UDPglucose and fructose-1,6-bisphosphate) were responsible for driving bacterial growth while the other metabolites, which were potent mammalian signals, did not impact bacterial growth. This discovery demonstrated that there is still a potential to use specific metabolite mixtures to influence mammalian signalling without enhancing bacterial growth.

Bacteria use or hijack mammalian ‘good-bye’ signals for nutrients.

Feeding on the dead: Death-Induced Nutrient Release
To explore this cell-death–bacteria relationship further, the team sequenced the genes of bacteria grown in the apoptotic supernatants in the hope of identifying specific microbial genes that are key to driving bacterial growth. Interestingly, they identified the Salmonella gene pyruvate formate lyase, pflB, which encodes for an enzyme that transforms pyruvate into Acetyl-CoA and formate. Deletion of the pflB gene significantly reduced Salmonella growth in apoptotic supernatants, suggesting a direct role for pflB in promoting Salmonella growth.

Bacteria are highly efficient organisms in terms of regulating the genes involved in metabolic function, such that these metabolic enzymes are often only expressed when their substrate is present. Thus, increased expression of pflB suggested that there may be an abundance of pyruvate in the apoptotic supernatants. Indeed, the team found that mammalian cells produce and release pyruvate during cell death which then directly fuels Salmonella growth. Treatment of the mammalian cells with the pyruvate kinase inhibitor shikonin was shown to reduce the amount of secreted pyruvate, which in turn significantly reduced Salmonella growth.

Thus, intestinal bacteria appear to have an efficient growth strategy which exploits the soluble factors that are released from dying gut epithelial cells as a means to acquire nutrients/food. The team have termed this process ‘Death-Induced Nutrient Release’ or DINNR.

Advancing therapies
In the context of cancer patient care, gastrointestinal toxicity due to chemotherapy treatment not only affects quality of life but can lead to shortening of the therapy or lowering of the therapeutic dose; both of which can inevitably affect therapeutic efficacy. Furthermore, cancer patients undergoing chemotherapy have a significantly greater risk of developing subsequent infection. This relationship between chemotherapy and bacterial infections is particularly interesting to the authors. ‘Unlike foodborne infections or flare-ups of inflammatory bowel disease or Crohn’s disease, where a patient does not know when he or she will be “under attack”, physicians know exactly when they are administering chemotherapeutic drugs to cancer patients,’ says Anderson. ‘So, conceptually, we have a therapeutic window where we can try to develop some sort of combination therapy to limit this fuel for bacteria.’

In summary, the work by Ravichandran and his team introduces a new layer to the complex host–microbe interaction, in which death-induced nutrient release acts as a source of fuel for intestinal bacteria. If we are able to change or restrict the release of some of these nutrients during cell death, then there is an opportunity to improve patient care. As with any piece of fundamental research, there is more work to be done, but these findings raise exciting possibilities for future therapies.

What are the next steps for this research, particularly in terms of developing strategies that restrict or change some of the key nutrients released from dying mammalian cells that are used by bacteria as fuel for infection?

Current work by CJ Anderson and the Ravichandran group is seeking to identify the comprehensive list of metabolites that are released from apoptotic epithelial cells and how these newly identified metabolites impact mammalian cell signalling and/or bacterial growth. These studies hope to reveal new players to target for dampening the production or release of bacterial growth-promoting metabolites from the dying mammalian cells, or blocking the ability of the Enterobacteriaceae to recognise and use these metabolites for growth. Given the ability of both host and microbe to utilise the same molecules for different purposes, the ultimate goal is to shift the balance of metabolites such that they can maximise mammalian cell efferocytosis while simultaneously stifling bacterial outgrowth.

One cell’s death is a microbe’s DINNR: How intestinal bacteria use our dying cells as fuel was last modified: July 8th, 2022 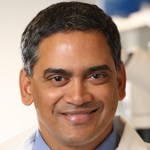 Kodi Ravichandran is Chief of the Division of Immunobiology at Washington University School of Medicine in St Louis, USA, and Professor and Group Leader at the VIB UGent Center for Inflammation Research, Belgium. His labs study the process of clearing dying cells in health and disease.

CJ Anderson is a postdoctoral fellow at the VIB UGent Center for Inflammation Research, studying host–pathogen interactions within the intestinal tract. CJ got his PhD in microbiology from the University of Virginia, USA, before joining the Ravichandran group in Belgium in April 2018.

Ravichandran K. (2022). One cell’s death is a microbe’s DINNR: How intestinal bacteria use our dying cells as fuel. Research Outreach, 128. Available at: https://researchoutreach.org/articles/one-cells-death-is-a-microbes-dinnr-how-intestinal-bacteria-use-our-dying-cells-as-fuel/ (Accessed YYYY/MM/DD)